Currently we are being warned of a potential disaster for  ash trees in the UK. The Chalara fraxinea fungus may cause millions of ash trees to be lost from what is becoming known as 'ash die back.'

The tree in my first picture is an ash tree that is somewhat the worse for wear, battered by storms and apparently dead.


This tree is not a victim of ash die back as there has been no cases reported in the area. However on closer inspection the tree is not as dead as it looks supporting as it does -

The tree's bark may be the worse for wear but the fungi are not.

This little fellow has appeared before when Carmi's theme was red but he was definitely somewhat worse for wear when he flew into our lounge window early one morning.

He recovered after a while a flew away, but not in a very straight line. 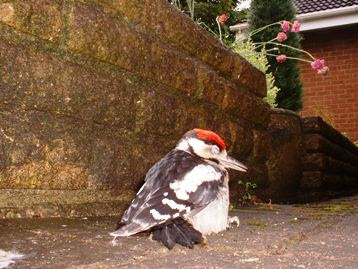 We can't claim to have had the winds of Hurricane Sandy but a Cornish storm had this effect on a garden shed.

I've written about my daughter's dogs before. Currently Lily is somewhat sorry for herself.


This was after an overnight stay at an animal hospital where she went somewhat worse for wear with a nasty injury.

She was found in this condition when my daughter arrived home from work. We have still to established how it happened.

This week theme of hobbies proved difficult for me until I came across the Hemulens, a species of characters created by the Finnish author Tove Jansson.

Hemulens tend to be obsessive characters devoting themselves to one interest - skiing, stamp collecting, butterflies or whatever. Does anyone recognise themselves?

It may have been a coincidence but in Saturday's Daily Telegraph an article appeared about the author Vladimir Nabokov who wrote 'Lolita.' Apparently Nabokov was an accomplished lepidopterist.

Now I had something to work with. I wouldn't say I am a Hemulen, but I have a butterfly or two.


Of course a lepidopterist is also interested in moths.

The Saturnia pyri is a native of Europe, but not Britain, and is also known as the Great Peacock Moth or Giant Emperor Moth.

If I wanted to be obsessive about butterflies the one set of stamps I'd like are these from much nearer home.

Shame that I have had to scan them from a catalogue. Oh well, I guess I shall have to remember the Tortoiseshell and Peacock flying round my garden in the summer.


But now it's time to explore the hobbies from others on Viridian's Sunday Stamps 94
Posted by Bob Scotney at 14:13 8 comments:

Take a Bath with a ghost or two - Sepia Saturday.

Well! What were my first thoughts when I saw the picture theme for this week? 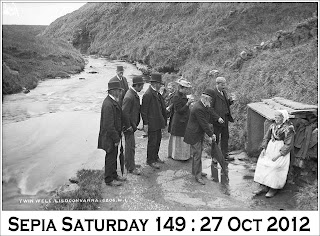 I considered Mother Skipton and the spring that was discovered at Knaresborough, Yorkshire. The spring has exceptionally high mineral content such that any object placed into the waters' flow will turn to stone within days.

However it's the historic city of Bath with its Roman ruins and Regency Architecture that will be the subject of this post. Bath Spa is world famous for its Roman Baths.

A city as old as Bath has some phantom visitors including the 'Man in the Black Hat' said to be the ghost of the first Governor of New South Wales.

Admiral Sir Arthur Phillip was on board the Sirius which led the First Fleet to transport convicts from England to Australia. After an eight month voyage the fleet land at Botany Bay in January 1788 to establish the penal colonies.

But why should he haunt Bath's Saville Row dressed in 18th century finery including a black tricorne hat? He died there in 1814.

When it comes to architectural masterpieces Bath has the famous Royal Crescent.

I can see plenty of cars, but there is no sign of the ghostly carriage said to appear in the Crescent to commemorate the elopement of the playwright and politician Richard Brinsley Sheridan and his lover from number 11.


(Engraving from a portrait by Joshua Reynolds)

Sheridan fought two duels with Captain Thomas Mathews over Miss Elizabeth Linley who later became his wife. However there is no evidence of either Sheridan's 'The Rivals' or 'School for Scandal' being performed in the early years of  Bath's Theatre Royal.

Here the ghosts of an 18th-century married woman and her lover, murdered by her husband, are said to wander between the theatre and the Garrick's Head, the next-door public house

I may have wandered a bit from the theme but now you may wander over to check out other posts for Sepia-saturday-149 for a taste of healing waters.
Posted by Bob Scotney at 15:52 24 comments:

The travel theme is so broad that it's difficult to know what to include. In the 1980s I lived and worked in Norway and sometimes had to use a hydrofoil like this.


The old town of Stavanger is very picturesque and isn't always as empty as it was the day the shot was taken.

Perhaps this was the day that the Queen and the Duke of Edinburgh visited the town aboard the Royal Yacht.

I never got to see the Queen as I was at Rosenberg Verft at the time.

I did get the chance to capture this shot in Germany when my daughter was at university there.

However I know that the chance to travel in space will never come my way but that does not stop me admiring pictures taken by the Hubble Space Telescope.

Now you should travel over to Carmi's thematic-photographic-218 and see where other folk have been.

The theme this week is ships of any sort. This gives me the chance to select one stamp commemorating the exploits of one man.

On 28 May 1967 in the yacht Gipsy Moth IV he became the first man to race solo round the world with only one port of call (Sydney). The first solo circumnavigation had been completed by Joshua Slocum in the 1890s but he had numerous stops and had taken 3 years. Chichester completed the circumnavigation in 226 sailing days.

The commemorative stamp was issued 24 July 1967.

Francis Chichester was knighted by Queen Elizabeth II, also in July 1967, using the same sword used by Elizabeth I to knight another Francis - Sir Francis Drake, the first Englishman with his crew to complete a circumnavigation of the world.

I could have chosen stamps from 13 different countries for this week's theme, but thought Gipsy Moth IV and Chichester, of course, deserved a post of their own.

I was at a bit of a loss when I saw the picture Kat had posted for this week. 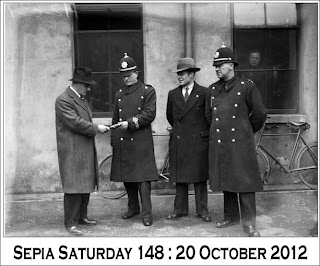 I had covered A Policeman's Lot before and Get on your bike has been visited by more people than any other of my posts. However by searching round a bit I have come up with this.

Sir Robert Peel's first "Bobbies" may have worn top hats but it wasn't long before they had the iconic helmets.

In South Africa black policemen had no shoes.

By 1914 cops were on the screen, immortalised by Mack Sennet Studios.

Publicity still from "In the Clutches of the Gang" 1914

These days however it is necessary unfortunately for the "Bobby" to wear a stab vest on duty.

Of course there is a variety of headgear as shown by this collection from Thames Valley Police.

In our village the police always seem to be in patrol cars but these are not as photogenic as this patrol vehicle.

Finally and much closer to home I've found some windows for you to admire.

The station had moved from a Victorian police station around the corner in Bentley Wynd to this even older building on the High Street. The building is early 18th century, way before a police force existed, and has unusually rounded head windows.

Now it's time for you to head off and check out other posts on offer at Sepia-saturday-148
with one last look at how protective a policeman's helmet may be. 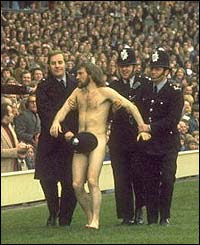 The theme this week is drink up, celebrating any form of consumable liquid, and a theme that can be interpreted in many different ways.

This summer in the UK has not given us many chances to sit out and celebrate in the sun so there has only been the odd day like this.


Or is it half full?

One of my favourite books begins with the line, "It was a cold grey day in November." - the day that Daphne du Maurier's heroine, Mary Yellan, arrived here.

For one reason or another it's several years since I had an alcoholic drink but not so long ago as when this source of water was in everyday use. 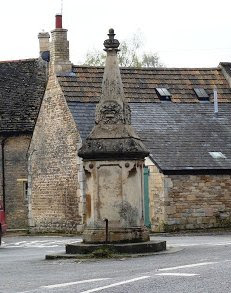 The monument at Ketton, the village where I grew up, was erected including the cold water tap to commemorate the Diamond Jubilee of Queen Victoria in 1897. Forty years later I was born in a house a stone's throw from Stocks Hills. The only water available twenty years after that was still from a cold water tap on the outside of the house.

Many years later with two children as well the opportunity came to drink up something stronger abroad.

You should be able to date this pair in the process of drinking up from the size of those shoulder pads.

Just occasionally I managed to get in on the act too, when home from Norway for Christmas.

They say you can take a horse to water but you can't make it drink - not true in this case at least.

There really is only one way to finish this post.

So grab your glass and go over to Thematic-photographic-217-drink-up
Posted by Bob Scotney at 14:26 14 comments:

Viridian set us a theme we've had before : the folkways of various cultures. folktales, food, costume, pottery, you name it. I've chosen national costumes but I'll admit I have some work to do. All my stamps are from Greece. 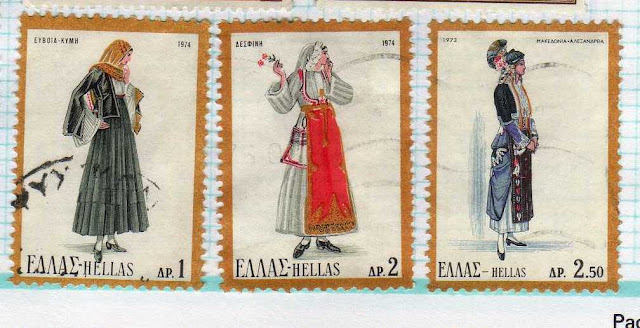 I have worked out that the stamp on the right of the second row and the single stamp at the bottom show costumes from Macedonia. I'm still checking the rest.

To see what else has been posted this week don't forget to check out Sunday-stamps-92.
Posted by Bob Scotney at 14:11 10 comments:

Alan has departed on a cruise, Kat has posted a picture of some soldiers for us. 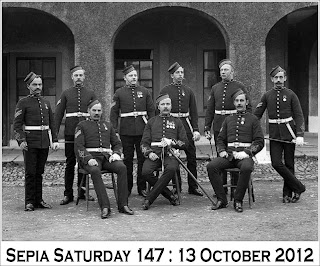 I decided to go to war with the Fleet Air Arm and post more shots from my brother's album.

I have no means of knowing where this was taken. By straining my eyes I believe that my brother (George Arthur Scotney) is eight from the right on the first standing row. The aircraft is a Swordfish; the photo must have been taken c1939.

Arthur's war service took him to the Mediterranean and Ceylon during WWII. I know he spent time on the carriers Illustrious, Indefatigable and shore establishments at Dekheila in Egypt (now Alexandria airport) and Malta. Post war his service record show him as having been at HMS Daedalus (Royal Naval Air Station Lee-on-Solent), HMS Blackcap (RNAS Stretton) and at several airfields on Malta.

However I am unable to place where the following pictures were taken.

And finally the pilots.

What chance is there of someone recognising any of them? These men would all be in their 90s if they are still alive.

For other groups of men you need to dash over to the sergeants at  Sepia-saturday-147
Posted by Bob Scotney at 16:02 19 comments: