Happy New Year to everyone.

I have found it difficult to pick just one favourite for Carmi's theme. So here's a selection of the ones I, and my wife, have chosen.

Please tell me which one you like the best.


There has to be a favourite dog, but my wife is not keen on this picture - she loves the dog.

For favourites chosen by others cross over to, and follow the links at, Thematic-photographic-322.

In 1968 the Christmas stamps show children with toys, just right for this week's theme.


In addition to the 'Children with Rocking Horse' and the 'Boy with Train Set' there was a third (9d) stamp of a 'Girl with Doll's House' which I need to complete the set.

The 2003 series of Classic Transport Toys included this:- 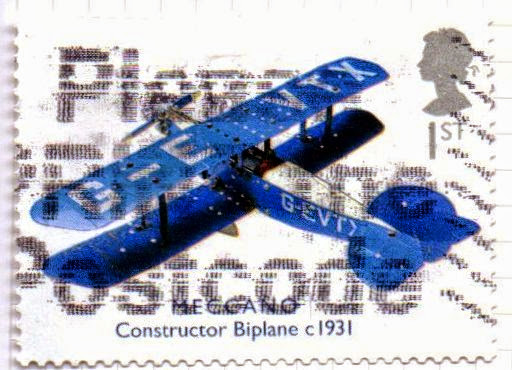 It doesn't seem 65 years ago that I had a Meccano set (I wonder what happened to it) with which I spent many happy hours. I never built a plane with it, as far as I can remember.

To play around with other toys please visit the links at Sunday-stamps-II
Posted by Bob Scotney at 09:28 5 comments:

I''ve written about Temenos before (here) but couldn't resist revisiting its photo's for Good Fences this week.

The work of public art in the Middlehaven area of Middlesbrough in the North East of England has fenced walkways that lead you to it from one direction. 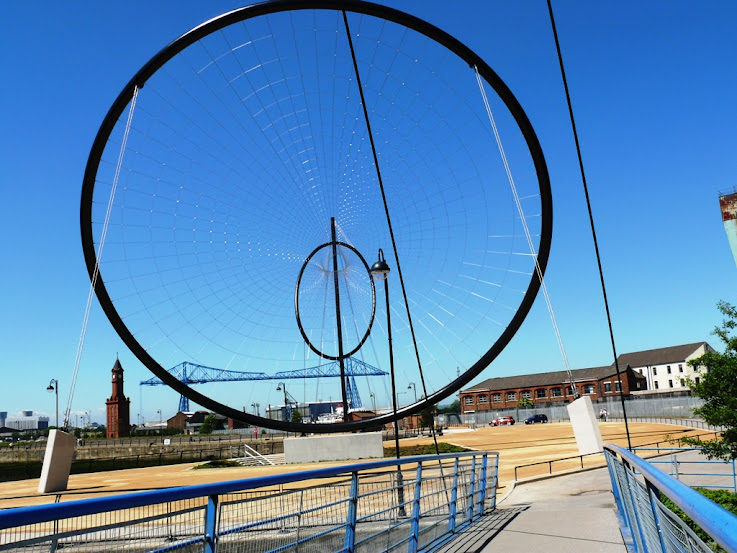 That blue structure in the background is Middlesbrough's iconic Transporter Bridge.

Temenos frames the Riverside, the football stadium that is the home of Middlesbrough football; the fence just stops your falling in the dock. 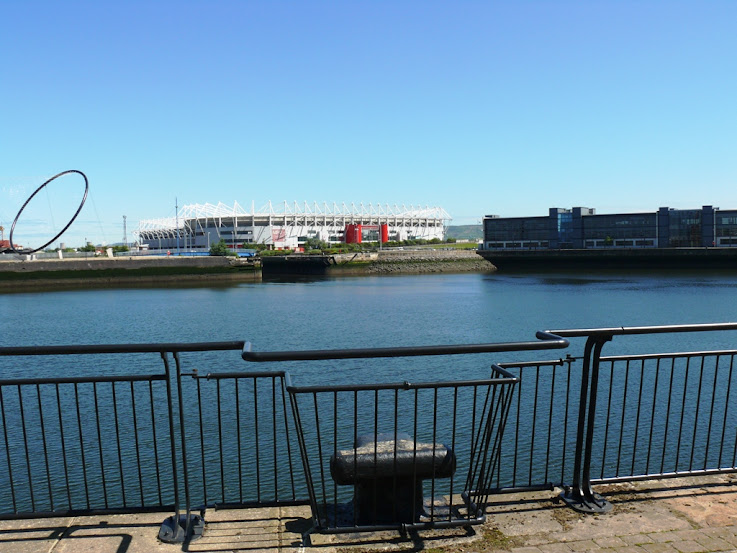 And as it's Christmas Eve I hope you all have a very merry Christmas and that you may find a fence that is white.

For more festive fences hop over to Good-fences 40.

Last week Postcardy showed the PHQ cards for the GB Christmas stamps of 1981.

I find that it's easier to acquire the stamps from years like this than it is to get the current year through the post. These children's pictures were no exception.


The stamps and the children were:


Merry Christmas everyone and thanks to Violet Sky for continuing the Sunday Stamps meme at Sunday-stamps-II
Posted by Bob Scotney at 09:25 7 comments:

Where You Work - Thematic Photography

When you have retired like me 'Where you work' takes on a different meaning.

I'm accused of playing when I sit here - 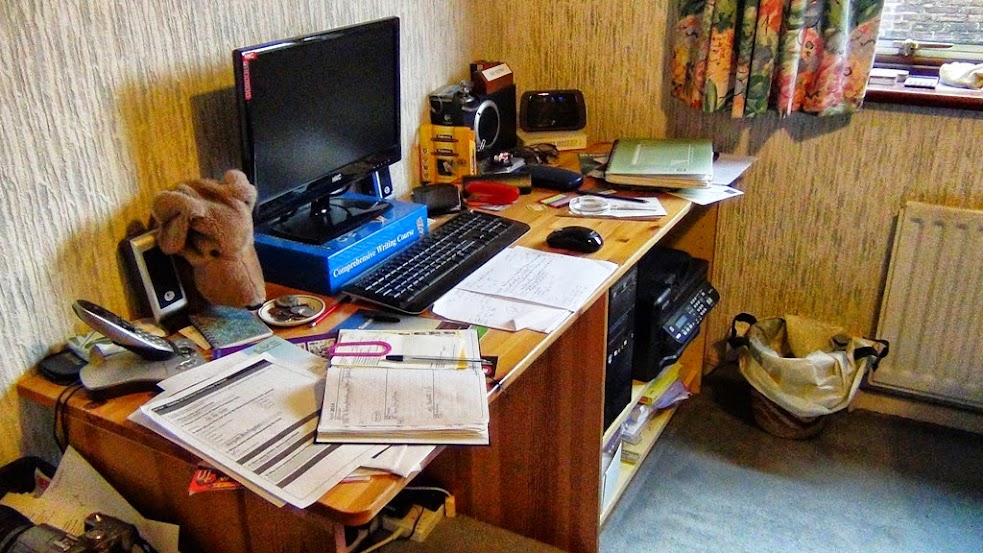 working on my blog.

However when the weather's fit there's work to do outside,

For some years now I have been fighting a losing battle with a conifer at the front of our house and the gravel pull-in at the bottom of the drive.

The conifer has had to go and hopefully it has made where I work somewhat easier for next year. 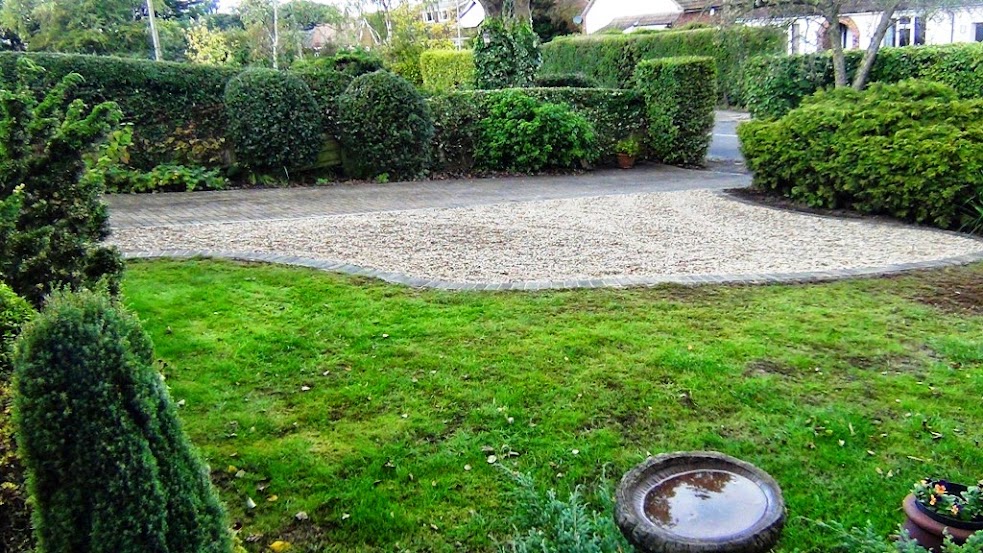 I'm pleased to say the lawn has fully recovered from removing the tree and has had its winter cut - nowhere for me to work (I hope) until March at least.

To others' workplaces cross over to Carmi's thematic-photographic-321.
Posted by Bob Scotney at 13:12 6 comments:

Scenes from the Cornish town of Fowey in 2008.


I think I might have stayed inside for a bar meal and a pint.

Other steps were fenced of too.

Somehow I don't think the optician on the right would have done much trade.

Any more that anyone sat upon this seat to watch folks or boats go by. 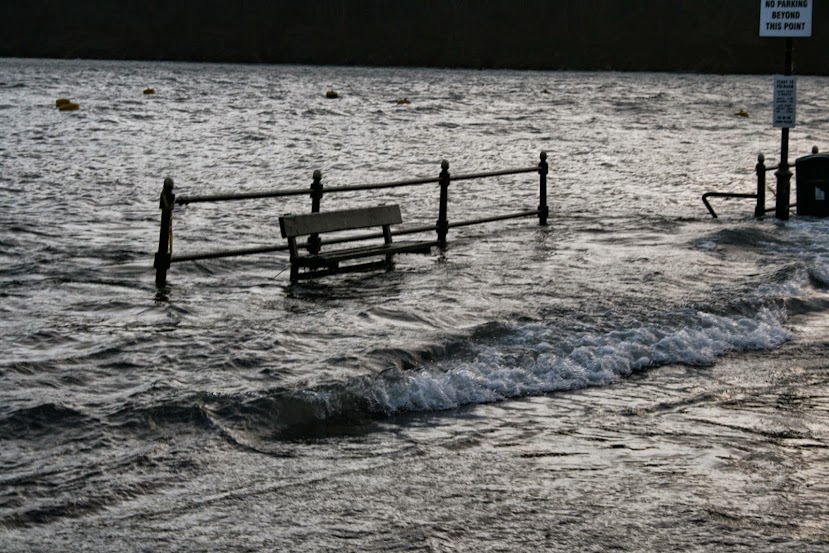 I joined Sunday Stamps hosted by Viridian in the second week it ran and have participated since up to this, its 200th edition. As Viridian is handing over the baton after this week to Violet Sky I must pay tribute to Viridian for all the hard work she has put in for us to reach that 200 milestone.

Over the weeks there have been many stamps depicting art of various forms, but I am returning to British paintings on stamps issued on 12 August 1968. I have shown two of these before but have since acquired the full set of four.

The 'Darnley Portrait' of Elizabeth I hangs in the National Portrait Gallery.Painted about 1575 it was named after a previous owner and shows the Queen with a crown and sceptre on the table beside her. The portrait is the source of the face pattern 'The Mask of Youth' used for portraits of Elizabeth for years to come.

John Piper was commissioned as a war artist during WWII to paint the 'Home Front.' His series of paintings of bombed buildings included the Bristol church of St Mary le Port which had been hit in attacks on Bristol Docks in November 1940

Pinkie, painted in 1794 by Thomas Lawrence hangs in the Huntington Library at San Marino, California. The museum has given it the title of Sarah Barrett Moulton, Pinkie. Sarah was about eleven years old when she posed for the artist.

Constable's Hay Wain finished in 1821 is one of the greatest and most popular English paintings. It show the wagon in the River Stour between the counties of Suffolk and Essex - the left bank is in Suffolk, the right in Essex.

For links to other art, cross over to Sunday-stamps-200.

I knew immediately I could match this week's prompt. 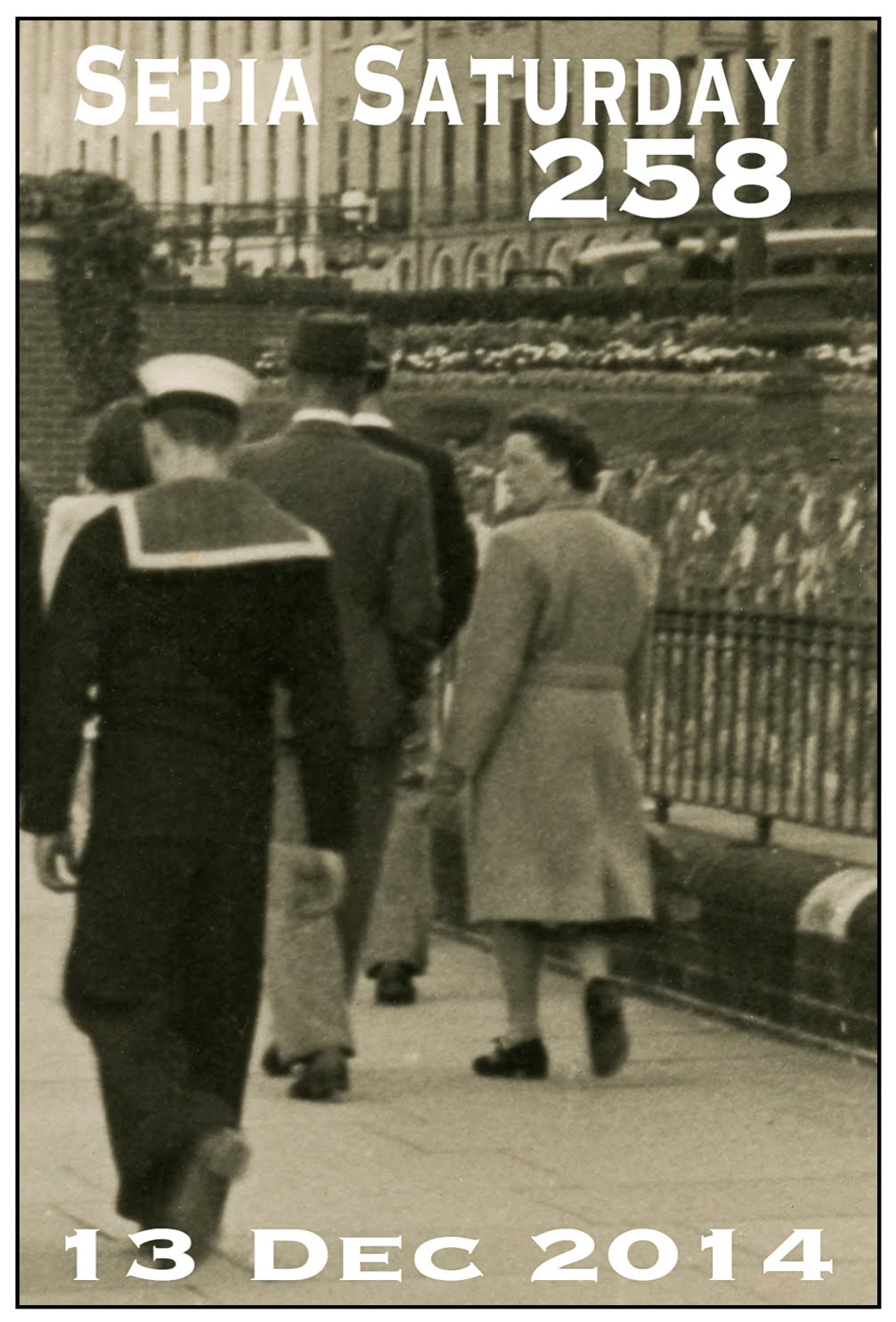 The background of a larger shot where people, including a woman and a sailor, are walking away from the camera.

This photo with the woman walking away towards a group of sailors comes from a wartime photo of a band either welcoming home an aircraft carrier, or maybe serenading one about to depart to war.

I prefer the welcome home scenario. 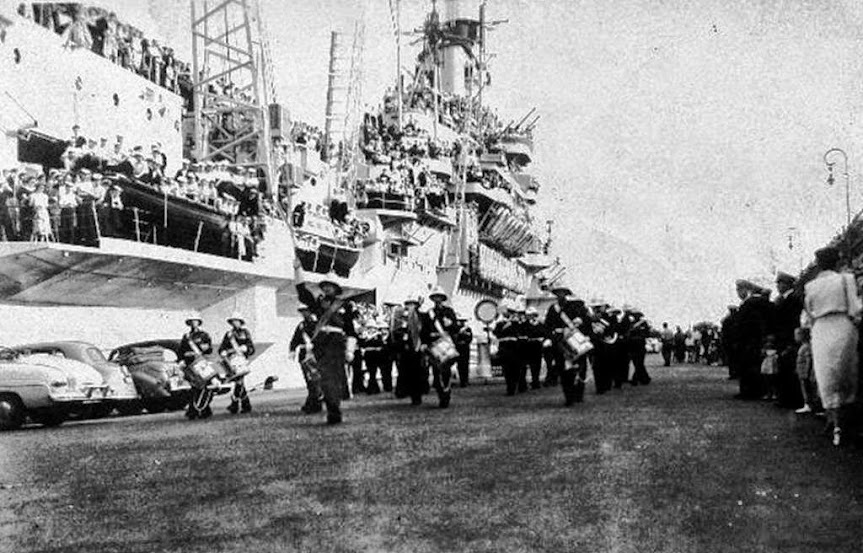 I also wonder whether that is the band of the Royal Marines?

Unfortunately my elder brother who served on carriers with the Fleet Air Arm during WWII is no longer alive to identify the occasion or the location for me.

I also wonder whether this is another photo taken from a different position on the same day. This looks much more like a welcome home occasion far different to this action shot.

Three pictures of the fence which forms one side of the'corral' behind my daughter's house. Her dogs have free access to the 'corral.'

It keeps other creatures out, including this visiting dog.

Some visitors will always raise a bark, if the dogs see them that is. 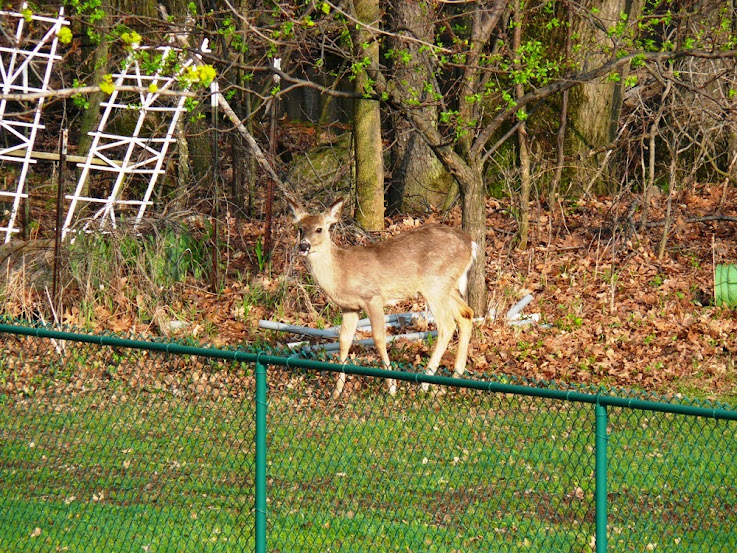 It would not need to be so high to keep out creatures like this.

I guess he could dig underneath it if he wanted to.

As I am not much of a handyman it's difficult for me to show anything I've made myself. Because it's getting close to Christmas it's time for my wife to show her skills - I'm sure that they will match those from previous years.


This year's cake will not be iced for some time yet, but I can smell the spirits which are used to soak it and keep it moist.

Homemade, they are always better than those you buy.

For other homemade objects you must check out the links of our host, Carmi, at Thematic-photographic-320.

What house is not filled with


when the tree is lit up.

Someone must have been busy as a bee even if the inhabitants here are hibernating now.

So I had to look elsewhere for -

There are even stripes on the tree trunk to the left of the van.

that I never tire of photographing from different angles.

But it was a different tree that provided me with a -

This has been a post for  Ashley Sisk's scavenger-hunt-sunday-228.
Posted by Bob Scotney at 11:23 9 comments:

I recently acquired, from my favourite market stall again, a set of stamps first issued on 10 May 1929.


The Congress is the main meeting of the Universal Postage Union which is normally held at every four years. 1929 was the only time it has been held in the UK.

Issues covered at that meeting were the approval of postal paid franking and the establishment of the first airmail regulations.

A £1 stamp was issued at the same time,

As this is valued at £550 by Stanley Gibbons in the used condition I don't expect to see one on my market stall.

This has been a Sunday-stamps. post hosted by Viridian. Visit the links to see what others have selected this week.

A Step Too Far - Sepia Saturday

A dog, a child and some steps in this week's prompt ought to be easy to match. 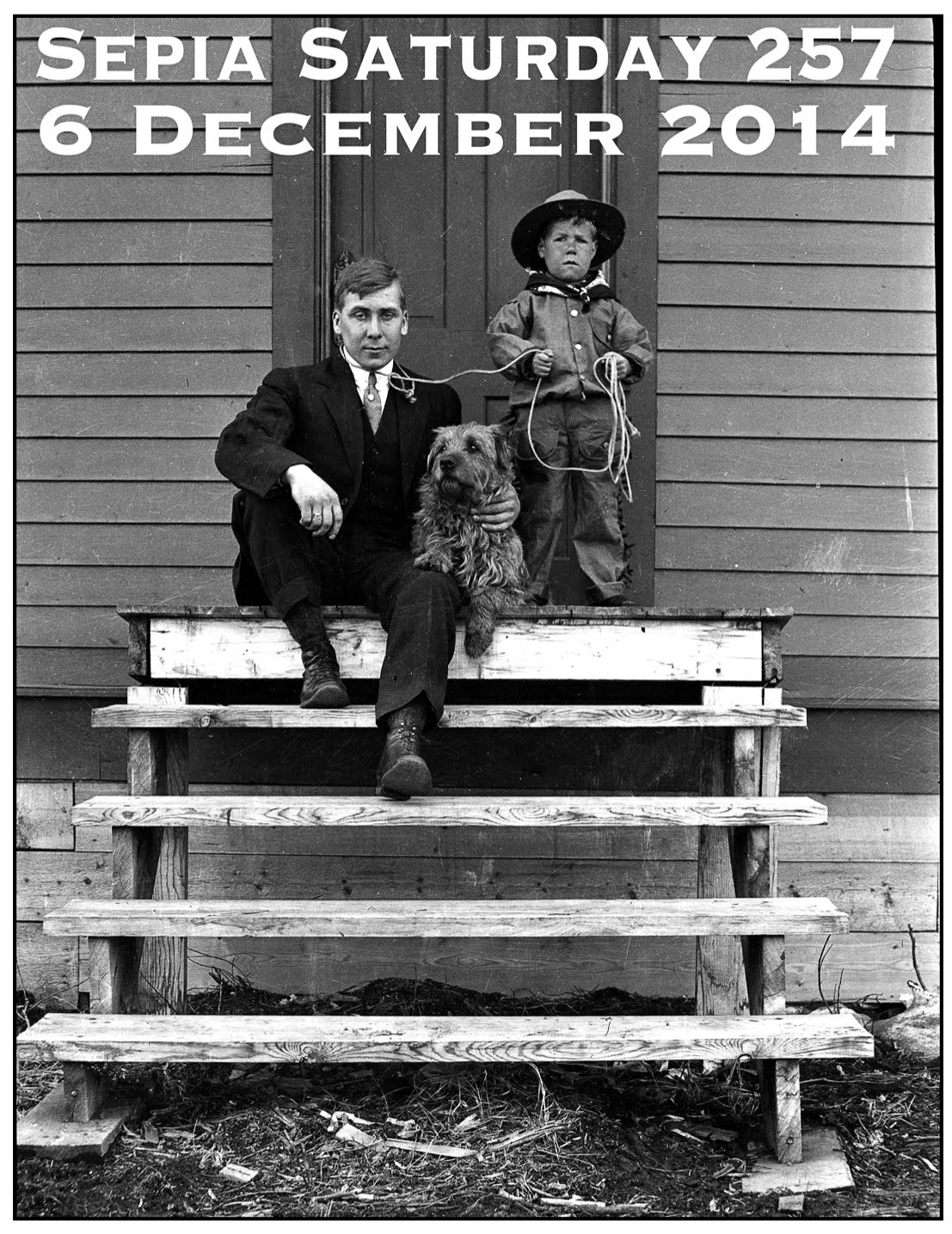 Golf used to one of my favourite pastimes and this picture from 1905 has steps aplenty just off the course.


When I was a student at St Andrews in the 1950s the 18th green looked much better than this.

My grandsons and their dogs found more steps in the woods alongside the River Severn although Alby seems to be wagging his finger at me behind the camera.

Over the years the steps at my daughter's home in Michigan have been a spot to capture pictures of our grand dogs.

In 2008 when we celebrated our golden wedding at Tresco in the Scilly Isles there were no dogs (or children) in evidence. In Tresco Abbey Gardens there was a shots of steps in the distance.

This statue is said to be symbolic of the freedom of the islands.

Before we travelled to Tresco we stayed in Fowey and my daughter managed to get herself photo bombed by a dog. 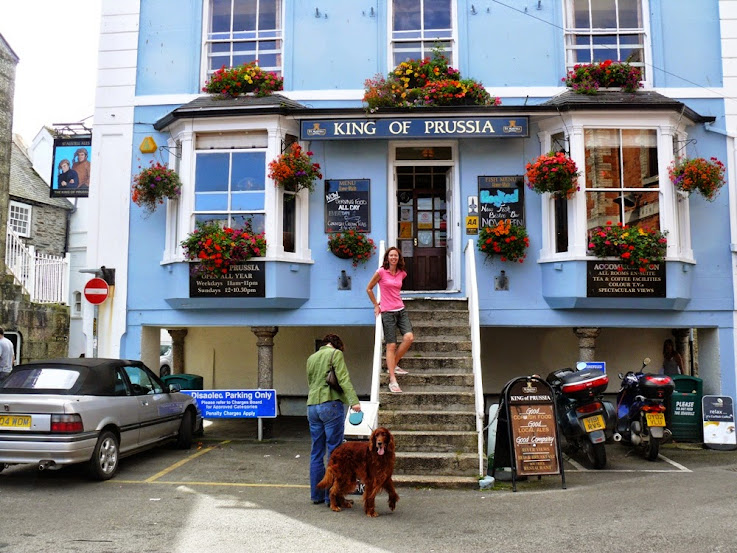 And it's dogs that found a step too far.

Now it's time for you to step over to Sepia-Saturday-257. to sample others' posts.