Every now and Carmi sets us a theme on which I can't wait to get started.

Nature gives us many small sized creatures including those not for arachnophobes.


So here's something much more appealing,

This year I have been fortunate enough to come across this in a Cornish wood.

Now that autumn has begun there are some small sized creatures that look for somewhere warmer.

I guess small boys qualify for this theme too.

Perhaps it would be better to be wearing them when trying to assemble the fob for our garage door.

Especially for the damned small size

For creatures and objects great to see but small in size follow the links at Thematic-Photographic-353,

I have no disaster stamps although the loser of a battle may have regarded it as a disaster.

This week I have two first day covers to show that commemorate battles of a different sort.


Bull Run, the first significant engagement of the war, dispelled any thoughts of a prompt resolution of the conflict. The battle took place in Virginia near a stream called Bull Run.

The Fort Sumter and Bull Run stamps were the first in a series commemorating the 150th Anniversary of the Civil War.

In Britain the news headlines this week has featured the issue of the latest Bond film. No mention has been made of the fact that one of the most famous battles in British History took place on October 21, 1805

The battle on 21 October 1805 was the naval engagement in which the British fleet defeated the combined forces of France and Spain during the Napoleonic Wars of 1803 - 1815.

The individual stamps, issued 18 October 2005, are worth looking at.

Six hundred years ago today in 1415 it was the British won the Battle of Agincourt. No stamps have been issued to commemorate this event unless you count this one which I have shown before.

'And gentlemen in England now-a-bed
Shall think themselves accurs'd they were not here.
And hold their manhoods cheap whiles any speaks
That fought with us upon St Crispin's day.'

For stamps commemorating other battles or disasters please follow the links at Sunday-Stamps-II-45.

Fences and a Gate with a messagel

Just occasionally a fence adds to the beauty of a flower shot.


On a recent visit to Cornwall we had to pass through a gate with a message for users.

Unfortunately we did not have one to exercise and had to settle for a stroll instead.

A bewitched setting to be linked to Good-Fences-83.
Posted by Bob Scotney at 13:13 8 comments:

I've used all my stamps showing maps before so I'll just wave flags instead.


This was issued to commemorate the centenary of the Royal Submarine Service as a set of four in a mini-sheet.

Finally one from Iceland.

To see other flags waving or to find maps from around the world cross over to Sunday-Stamps-II-44.

When Carmi sets us 'autumn' as a theme, the trees here in the North of England haven't all changed colour. My tree shot is from 2012.

In October our annual reminder of autumn is provided by scenes like these.


The annual fair is being held this week in the High Street.

Autumn is a time for berries, so here's a recognition test - especially for my daughter. Feel free to tell me/her what they are.


At this time of year, now that the harvest has been gathered in, the farmers are particularly busy.

They provide some interesting views. 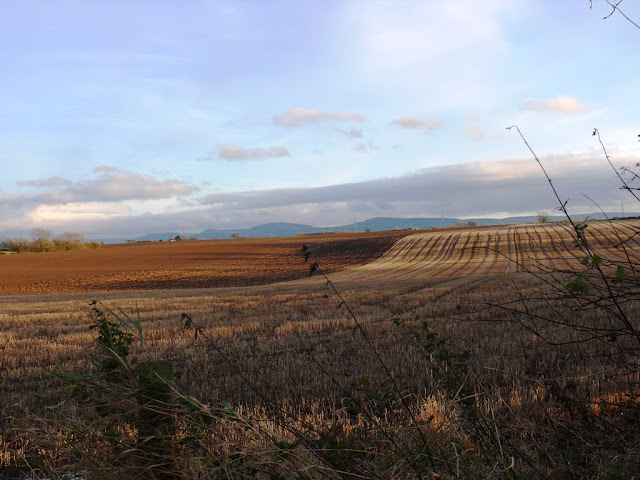 My previous post 'October Garden' ( http://bit.ly/1NBDY1n ) might also be said to be an autumn post. You will find others by following the links at Carmi's Thematic-Photographic-352.

Some autumn colours caught in our garden during early October.


All caught before the leaves begin to fall and flowers fade away.

When I was given an old stock album recently a number of flower stamps were included.

The Mississippi state flower is the Magnolia shown on this stamp from 1967.

Two of the set of four stamps issued to commemorate the XI Botanical Congress of 1969, when the first full meeting of 6000 botanists was held in the USA, contained flowers.


The lady slipper is the state flower of Minnesota; the Franklinia is a tree in the tea plant family, which looks rather like a wild rose that grows in the UK hedgerows.

For other flowery offerings check out the links at Sunday-Stamps-II-43.

From a great height - Thematic Photography.

This is a bit late for last week's theme but all the photos were taken then, during our holiday in Cornwall.


From a great height the holiday ends looking down at the clouds.

There's still time to look down from a great height elsewhere by following the links at Carmi's Thematic-Photographic-351.
Posted by Bob Scotney at 13:24 8 comments:

I'm a bit late in posting this week but have finally made it back home.

The stamps I have to show this week all date from 1966, one from Poland and a set of four from Great Britain.


Pieniny is a mountain range in the south of Poland and the north of Slovakia consisting mainly of limestone and dolomite rocks.

For scenery from elsewhere just follow the links at Sunday-Stamps-II-42.
Posted by Bob Scotney at 14:54 2 comments: