This is the final batch of scarecrows I have to show.


Hope you have all enjoyed see all the scarecrows in this year's Kirkfest competition.

Our visit to Newquay Zoo last week turned up two creatures in the pink.


If that is not pink enough for you, how about this reptile? I must find out what it is. 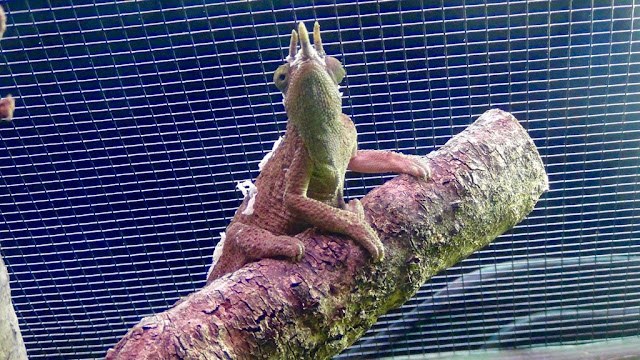 At home some flowers that I have shown before. 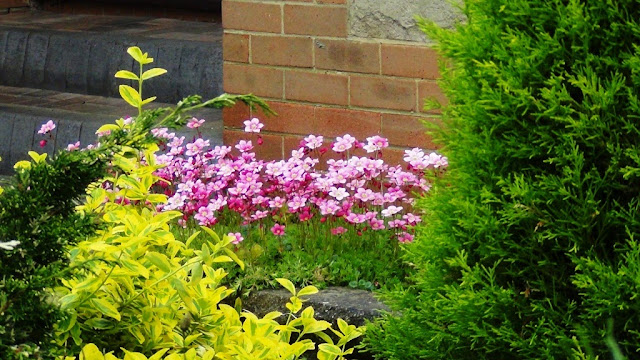 Each year there are a number of scarecrows set out in front of the village hall during the annual Kirkfest.


Others had links to different trees found in the village; I hope I can remember what they were.

One more post to come later in the week to complete my scarecrow shots.

We are on holiday this week, but not at the Glastonbury Festival.

I have to confess that I have never, ever attended a musical festival of any sort. In fact the only festival I went to was back in 1951.

What a shame that the Dome of Discovery and the Skylon did not appear on stamps, but in those days stamps were much more sedate.

A week ago yesterday saw the annual Trooping of the Colour as part of the Queen's official birthday celebrations. In 2005 a set of four stamps commemorated the occasion. Here's just one of them -

Three more entries in the Kirkfest scarecrow competition this year.


And for  you cyclists out there, watch if not take part in -

But be careful crossing -

Here are some more of the entries in the Kirkfest competition this year. 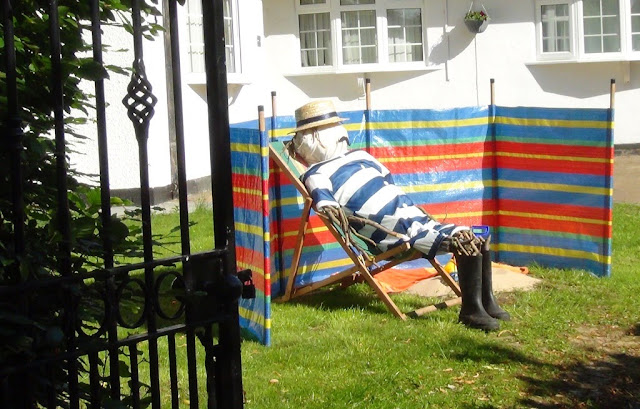 Now that's what I call an appropriate entry in this warm weather. 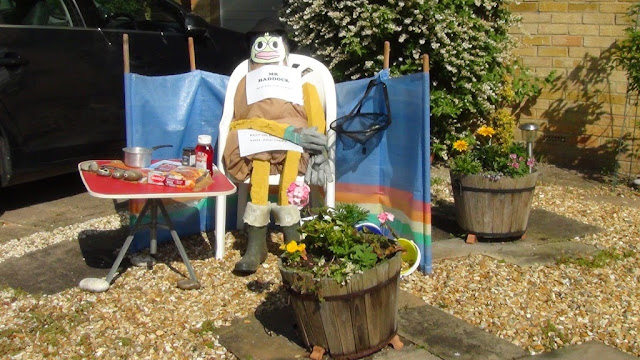 Others obviously had the same idea. 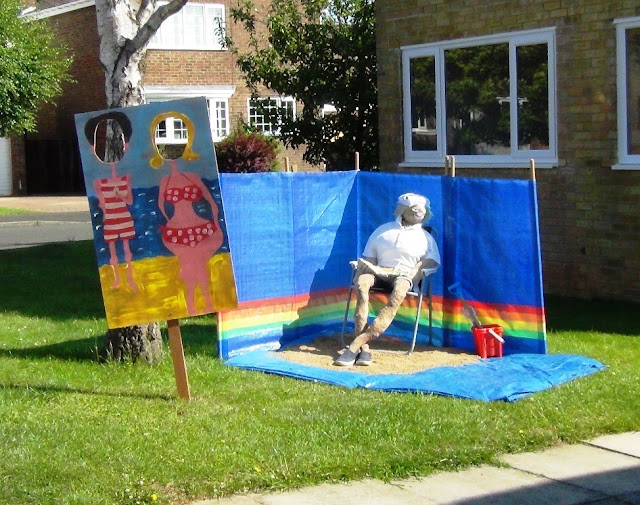 Any volunteers to have their photos taken?
Posted by Bob Scotney at 10:48 5 comments:

relaxing with a beer at the Crown Hotel.

Second was The Great Kirk Bake Off - 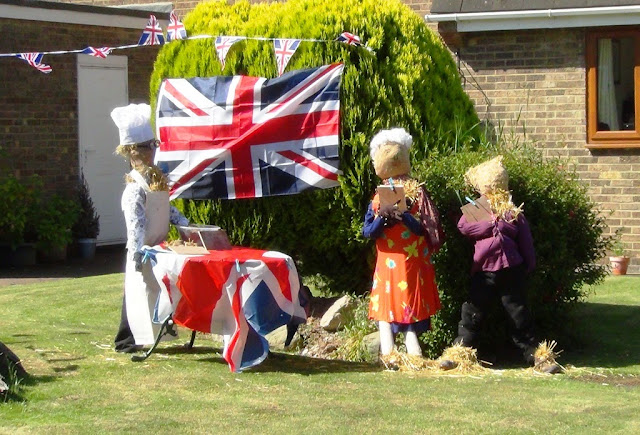 On the menu was Kirk strawgoneoff and Kirk levingeton mess.

In third place was a sentry at Kirklevington (Cottage) Castle. 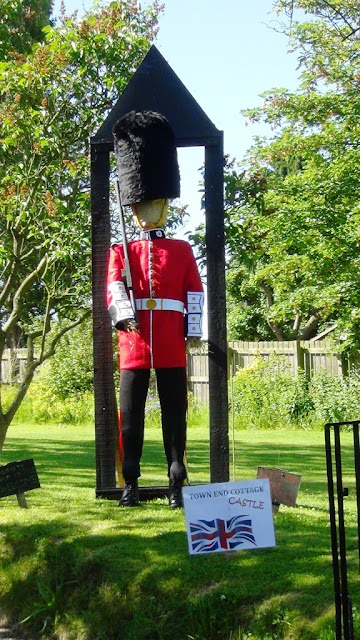 And a British Bulldog gained a merit certificate. 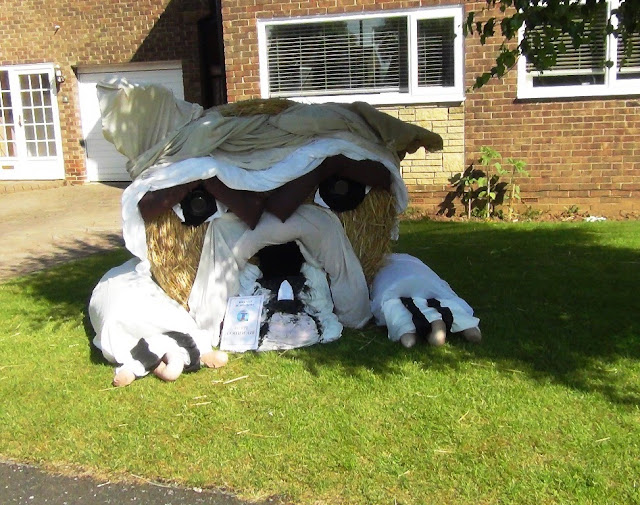 Weather related stamps proved difficult for me to find until I spotted a weather station on this Swedish stamp.


SMHI = Swedish Meteorological and Hydrological Institute; 100ÄR = 100 years. Just what is being measured here is not clear.

The discolouration on this stamp detracts from what it depicts.

This round stamp features a visual representation of the planet’s sea surface temperatures. It shows the Earth with North America at the centre and parts of South America, Asia, and Europe just visible on the edges, surrounded by vivid bands of colour throughout the oceans. The image is one frame in a 1,460-frame animation created from the output of a computer model of Earth’s climate by the National Oceanic and Atmospheric Administration’s Geophysical Fluid Dynamics Laboratory. The full animation shows how the surface temperatures of the oceans vary seasonally and change over time, and how surface ocean currents and eddies transport heat and water around the globe. (Explanation from US Stamp Gallery website)To check the weather outlook today, look no further than Sunday-Stamps-II-131.

Gardens and Forests proved a difficult theme for me. Kew Gardens I had shown before -

I struggled to find a forest, but then remembered Thiepval Wood and the poem by Edmund Blundell describing the devastating effect war can have on man and nature.

"The tired air groans as the heavies swing over, the river-hollows boom;


The shell-fountains leap from the swamps, and with wildfire and fume
The shoulder of the chalkdown convulses.
Then the jabbering echoes stampede in the slatting wood,
Ember-black the gibbet trees like bones or thorns protrude
From the poisonous smoke past all impulses.
To them these silvery dews can never again be dear,
Nor the blue javelin-flame of the thunderous noons strike fear."
September 1916

This stamp was part of the part of a five year commemorative programme marking the centenary of the outbreak of The Great War (WWI). Each year of the great war is to be explores through a stamp which covers six key themes: Poppies, War Art, Memorials and Artefacts.

It seems to fit our garden (of remembrance) and our forest theme at Sunday-Stamps-II-130.

Interesting theme; I had never considered fonts when collecting stamps.

What have I discovered this week?

At the risk of boring you again I must mention that the 2016 Pets USA stamps that I linked to last week had fonts in 'serifa' - I never knew that before.

The Rudolph the Red-nosed Reindeer Christmas stamps from 2014 had


a font called 'Verlag'. This was initially designed for the Guggenheim Museum, but was expanded and released to the public in 2006.

I thought that stamps identified by the name Helvetia ought to use the font 'Helvetica' like this one from Great Britain.

However when it comes to fonts, perhaps Switzerland 'wins' after all.

For more fonts or even christenings(?) visit Sunday-Stamps-II-129.