Last week I showed a stamp from Cuba; this time I have a Cuban revolutionary from the Dominican Republic.

Jose Marti (1853-1895) became a symbol for Cuba's independence from Spain, and is referred to as the 'Apostle of Cuban Independence.' The stamp was issued to commemorate his 100th anniversary.

I had an African connection last week in Chad. Now we move to Djibouti.

The Ethiopia - Djibouti railway has got through hard times. A new railway began operation in January 2017 and is a big hope for pan African trade. It uses some of the old route.

Djibouti became independent in 1977 as the Republic of Djibouti.

For more from Djibouti and other places, check out Sunday-stamps-ii-141
Posted by Bob Scotney at 08:07 4 comments:

The Republic of Chad is the fifth largest country in Africa; located in central Africa it is bounded by Libya, Sudan, Central African Republic, Cameroon, Nigeria and Niger.

Its wildlife includes the rhino, whose numbers have been decimated by poachers.

I have only one stamp from this country - it's a postage due stamp showing a rock painting.


My second stamp this week is also from 1962, and is the only stamp I have from Cuba. I think you can work out for yourself the date on which it was issued

The ILO was set up by the League of Nations after World War One. Over 180 countries are now members of this United Nations organisation.

For other 'C' related stamps visit the links at sunday-stamps-ii-140.

Bahrain is a nation of more than 30 islands in the Arabian Gulf.

Isa bin Salman Aj Khalifa, the first Emir of Bahrain from 1961 until his death in 1999.

I had intended to have one stamp from each of two countries in this A-Z. This soon proved to be a problem when it came to the Belgian Congo as I could not decide which one to choose.

I eventually settled for three from 1947 depicting African Masks and Wood Art. 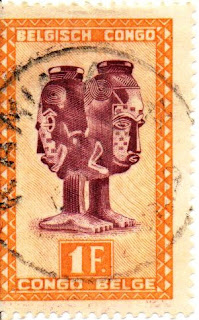 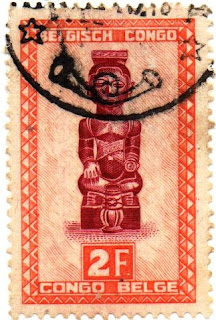 For other 'B' related stamps and not just countries please visit the links at Sunday-Stamps-II-139.
Posted by Bob Scotney at 08:17 7 comments:

Each year when the April A-Z Challenge comes along I consider using stamps as a topic.

Now Sunday Stamps embarks on an A-Z with, fortunately, one letter a week. In choosing what to show I am picking countries where I have fewer stamps and hopefully ones I have not shown before.

I'm not a great lover of cats but a Siamese on my only Albanian stamp starts the sequence off.

From Andorra, again a single stamp -

At the last count I have stamps from 8 'A'countries; it will be interesting to see how other letters fare.

To check other 'As' visit Sunday-stamps-II-138