This week's prompt of ships in Tønsberg harbour is ideal for me. 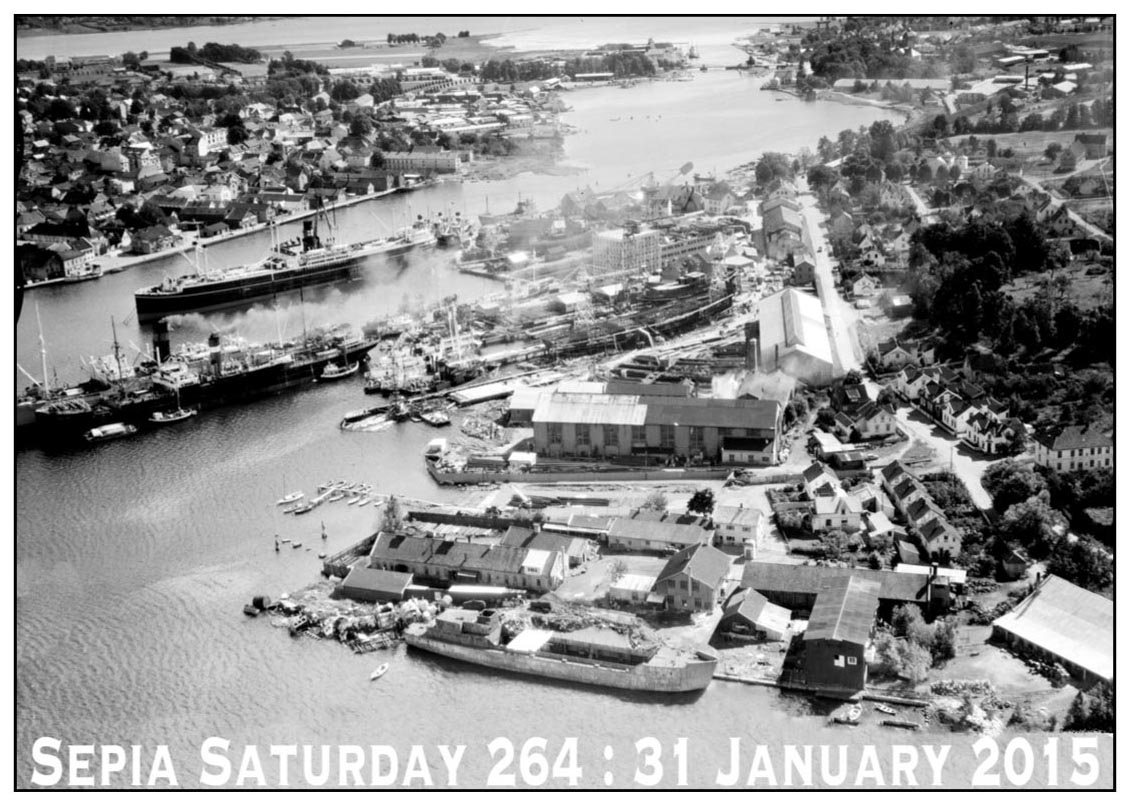 Tønsberg lies on the west coast of Oslofjord just over 100km south-south-west of Oslo near the fjord's mouth onto the Skagerrak.

Stavanger where I worked for most of the 1980s, long after the first two of my photos were taken, is on Norway's west coast.

The town centre is to the right of the the shot where ten years earlier the quayside had the replica of a Viking ship tied up alongside.

The Gokstad ship was found in a burial mound at Gokstad farm in Sandar, Sandefjord in Norway's Vestfold county - the same county where Tønsberg is located. Dendrological dating suggest that the Gokstad ship was built around 880 AD

After visiting Stavanger the Viking sailed crossed the Atlantic to appear at Chicago World Fair of 1893. 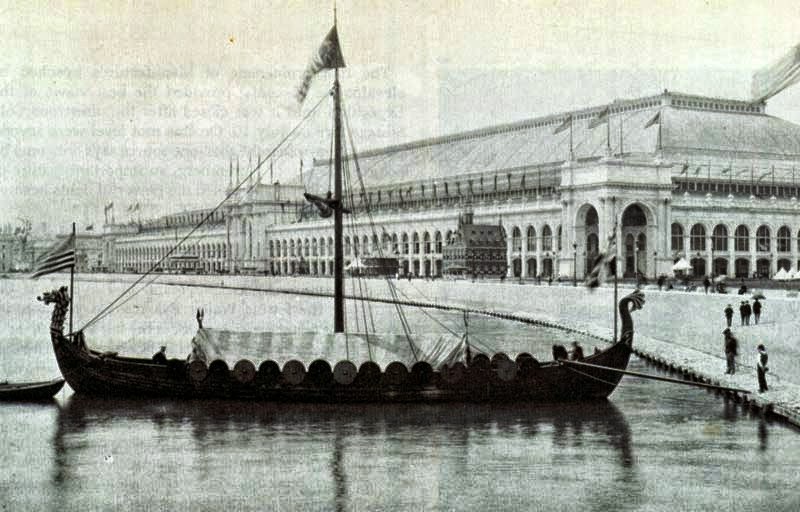 In 1978 the opening of the Stavanger City Bridge connected the city to the islands in the borough of Hundvåg where Rosenberg shipyard is located.

The structure on the dock at the bottom is the main support frame for Statfjord 'B'. The 'inlet' to the right of this is a dry dock where previously Rosenberg had been building LNG tankers.

I had the opportunity to see the Royal Yacht Britannia pass by Rosenberg in May 1981 when the Queen and Prince paid Norway a state visit.

I acquired a number of posters of platforms under construction during my time in Stavanger. The legs of Gravity Base Structures and concrete storage cells were outfitted at Gandsfjord close to Stavanger. We travelled there by boat out under the City Bridge to teach the site.

The concrete legs are over 100m tall and the storage cells beneath around 80m. That bridge linking the top of the cells was an interesting place to walk!

Before a platform is towed out to its location in the North Sea the legs are ballasted, sunk down with the completed deck floated over the top and secured to the legs.

When it comes to big passenger ships the visits I remember during my time in Stavanger included SS Norway and the QEII.

A gate to a house and a double fence, one each side of a footpath skirting a field.


If it's curves you want then follow a village lane.

In the village itself a rustic arch stands in the middle of a wooden fence.

However you need a key code to enter through these more formal gates.

Elsewhere a neat privet hedge is restrained with 'kisses' on a sunny winter's day.

But did it know that today it would have to brave the snow?

As I'm in my second childhood and my memory is not what it was, Carmi's theme this week has caused me some problems.

I've shown the house where I was born on more than one occasion.


That stone wall didn't exist back then and there was another empty building behind it to the left, Our front had a double grey gate and a grey wooden fence; a rose-bedecked trellis lined the drive where box hedge is on the right. There where no hatched white lines on the road, just one line down the middle.

The traffic island didn't exist either; although this is main road from Stamford to Leicester, during the late 1940s it was safe enough to use it as a football field - with a tennis ball of course.

The oldest photo I have of me is aged 12 in Stamford School boxing team.

Just in case you cannot recognise me:- 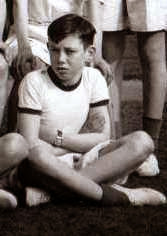 My pastimes in my second childhood include watching and counting the birds in our garden and photographing them when I'm quick enough. Some just pose.

even during the RSPB's Great Garden Bird Watch.

My wife says I'm playing when I'm out with my camera and uploading what I've taken to my computer. Here's one I took yesterday.

Not only do I play with Thematic Photography I also take part in Sepia Saturday. This week this involves me playing with some poster memories of my time in Stavanger.

The structure on the left is the topside deck for the Statfjord 'B' platform under construction at Rosenberg Verft where I was working. I was too small to be seen in the photo and regret to this day never having a camera with me to take my own photos - not that I would have been allowed on the helicopter from which the shot was taken.

However my second childhood memory has been good enough to find the souvenir poster we were given.

For more childhood memories don't forget to look in on Carmi's childhood thematic-photographic-323.

I thought I had shown all my 'shaped' stamps before so I went looking for more this week.

The Republic of San Marino, in Italy, first issued stamps in 1877 but I do not know when these sporting triangles were issued.


In 2003 Great Britain issued a set of Fruit and Vegetables which could be regarded as shaped stamps. Here's one I showed earlier.

I have another stamp that I couldn't identify for years.

Apparently the Fruit and Vegetable set was printed in sheets of 10 with the stamp pane accompanied by a pane of self adhesive labels with ears, eyes, mouths and hats etc intended for attachment to the fruit and vegetables depicted. That's why the answer is a lemon!

In looking for Australian stamps this week I've learnt a little history about Tasmania.

The Bay of Fires (indigenous name larapuna) on the north-east coast of Tasmania was given that name in 1773 by Captain Tobias Furneaux who saw fires of Aboriginal people on the beaches. Furneaux was on the ship Adventure; an English navigator and Royal Naval officer he accompanied James Cook on his second voyage of exploration.

The entire island is a national park. It was named in 1642 by the Dutch Explorer Abel Tasman after Maria van Diemen, the wife of the Governor-General of the Dutch East Indies. Tasmania was once called Van Diemen's Land.

This is a post linked to Sunday-stamps-ii-6.
Posted by Bob Scotney at 10:15 7 comments:

My elder son lives in Fowey on the south coast of Cornwall in the south-west of England and I've shown fences from there before.


Much older is the view through the window of St Catherine's Castle at Fowey.

The author Daphne du Maurier had a long association with the area and in 1929 wrote her first novel, 'The Loving Spirit,' in the house behind the blue fence.

At the right end of the house is the figurehead from the schooner Jane Slade.

Daphne was inspired to write the book after discovering the wreck of the schooner in Pont Creek. The figurehead was added to the house at a later date.

The Slade family were shipbuilders in the nearby . Their life and history were used by Daphne to create the saga, in The Loving Spirit, of four generations of shipbuilders and mariners in the fictional Cornish .

For more fences call in at Good-fences-44.


1981 was the International Year of the Handicapped.

The Norwegian Graphic Artists Federation celebrated its centenary in 1982.

Step up to the Bar - Sepia Saturday

I couldn't find any photos that have been written on like this week's prompt. 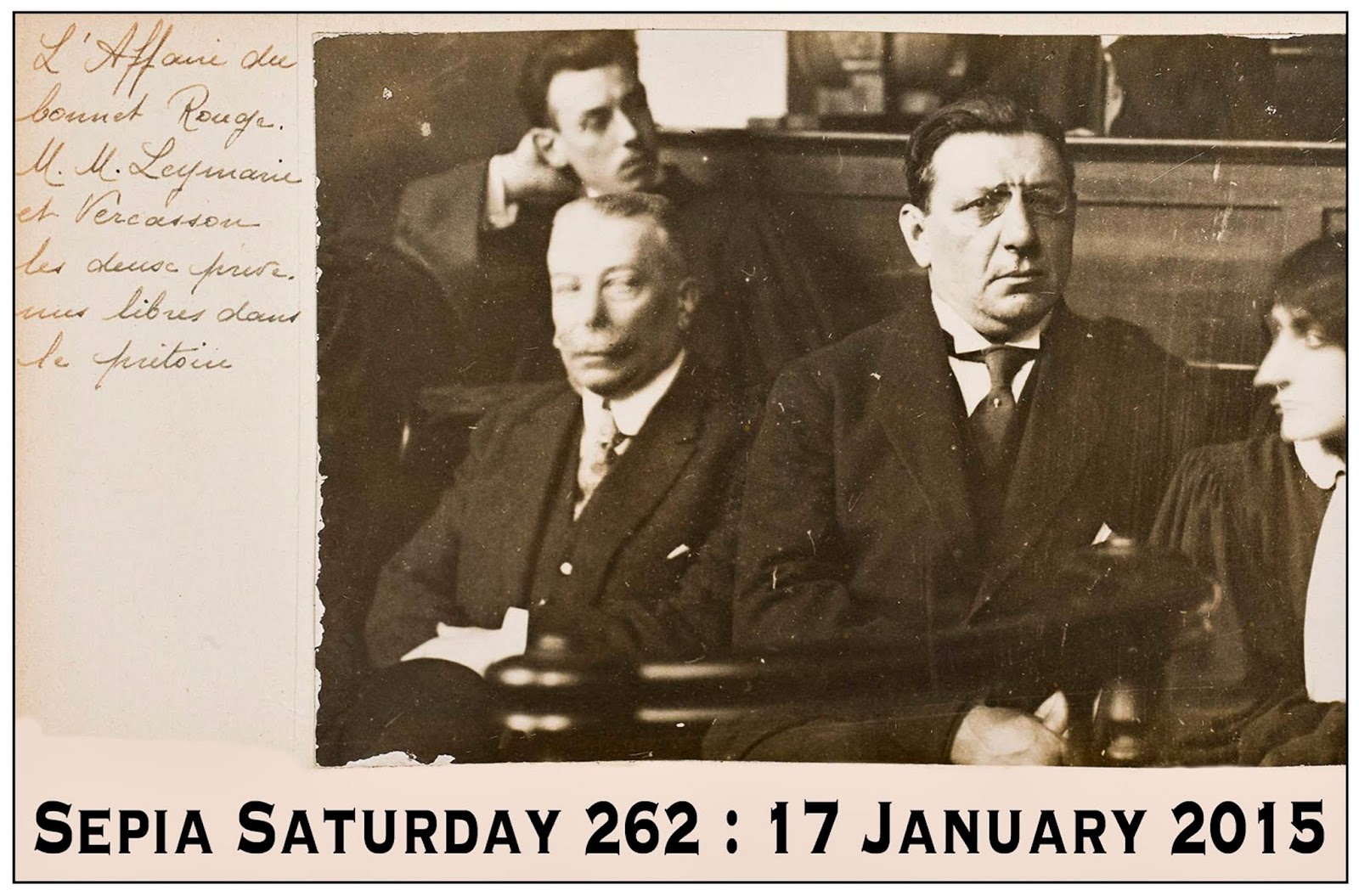 But I have a few related to the law.

Ten new lawyers become members of the Michigan Bar by taking the oath before a judge.

Our daughter, Rachel, is third from the right. 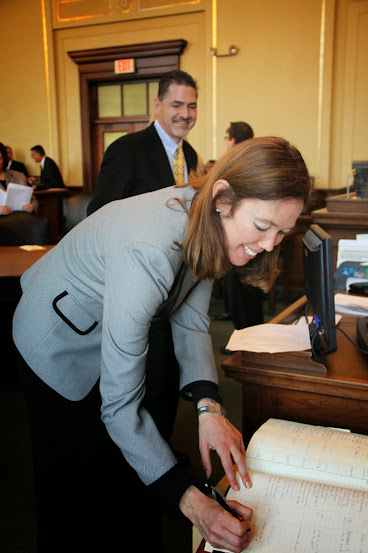 Having signed in, she is now in practice as a Business Attorney.

I'm sure Rachel will correct me if I have not got the terminology right. After all she acts as an Adjunct Professor at the Thomas Cooley Law School where she teaches scholarly writing to law students as well as appearing in Michigan courtrooms.

For other legal eagles, or photos with notes, approach the bar and follow the links at Sepia-Saturday-262.
Posted by Bob Scotney at 18:21 12 comments:

The Infinity Bridge, a footbridge over the River Tees at Stockton in the North East of England, was opened in time for the millennium. Its design is such that together with its reflection in the river, it looks like the  symbol for infinity.

The bridge itself has metal railings on either side of the walkway.

At various points the river bank has fences along its edge as you can see where the a local fire station practises with its Simon Snorkel ladder.

There is no fence along the bank from where the slipway ends.

You will find more

It wasn't until 1964 that someone other than the monarch appeared on stamps of Great Britain. That first person was commemorated on a set issued on his birthday - 23rd April.

Also in 1965 the pioneer of antiseptic surgery was honoured on the centenary of his discovery.

It was 1967 before a living person appeared on a GB stamp and then you have to look hard to see him.

Two years later it was the centenary year of one of the first foreign men that I was aware of as a boy, other than Hitler of course.

Rather than show a Hitler stamp I'll show a German stamp.

Our host has chosen a German stamp as well, to see this and follow the other participants please cross over to Violet at Sunday-stamps-ii-4.