This proved a harder theme that I thought as I have used all my stamps of real horses before.

However Iceland and Sweden rode to the rescue with a horse or two, even if the Iceland stamps show a pony.


My Swedish stamps are slightly newer, the first from a postal history and nature series.

From an earlier time in history a block of four,

A mosaic embroidery sheet  issued on 26 November 1974 depicted some horses. I don't have that sheet but one of the horses is in this pair.

Now you may ride over to Sunday-Stamps-II-85. and follow the links to some splendid 'real' horses.

When my life model refused to pose I felt I had been frozen out and reverted to;


Which didn't need a scarf to keep it warm.

To combat any excess stress you may squeeze two


There's no need to get


Just resort to the cosmetic cabinet

But even softness comes to an end.

For other softness contributions you need to visit the links at Carmi's thematic-photographic-377.

I have had problems with this topic before. Two stamps from a previous post were:


I must admit that these are fruits that I enjoy and I understand that blueberries are now regarded as 'superfoods'.

I have since acquired the other two stamps that were issued with those above in a se-tenant block on 10 April 1999.


The four stamps were issued in different formats as well in 1999, and as strips in 2000. You have to check the date in the bottom left corner to know which you have for single stamps.

For other food feasts please check out the links at Sunday-Stamps-II-84. Meanwhile I'm happy with my fruit.
Posted by Bob Scotney at 09:05 6 comments:

One thing we have in common, even if it's different in each one of us, is DNA.


Mike Curtis is a sculptor whose depictions are shown on this 1999 stamp. Unfortunately these show a spiral and not the DNA double helix. I wonder why the Royal Mail has, so far, not had stamps for Watson and Crick - perhaps they have to be dead first!

Watson and Crick have appeared on Swedish stamps if not the British.

In 2006 the Distinguished American series included scientists who developed polio vaccines. One was for Dr Jonas Salk and the other -

I believe it's time British scientists were commemorated too. There have been few so far.

Check out the links at Sunday-Stamps-II-83 for other science related issues.

Another selection of entries in June's annual scarecrow competition in the North Yorkshire village of Kirklevington.

Batman had a task to - 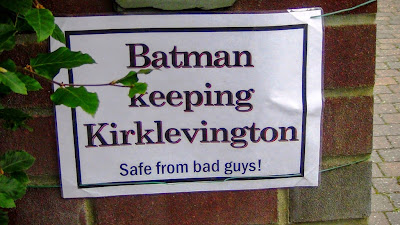 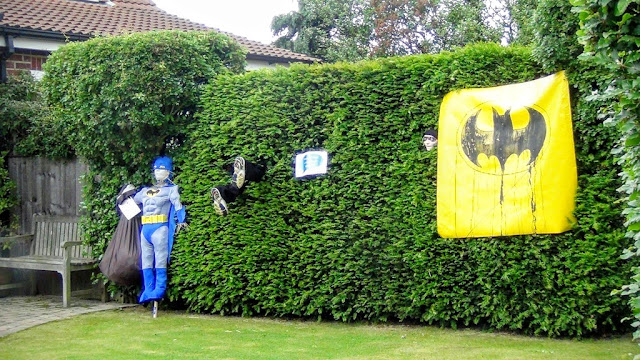 
Others had a windbreak 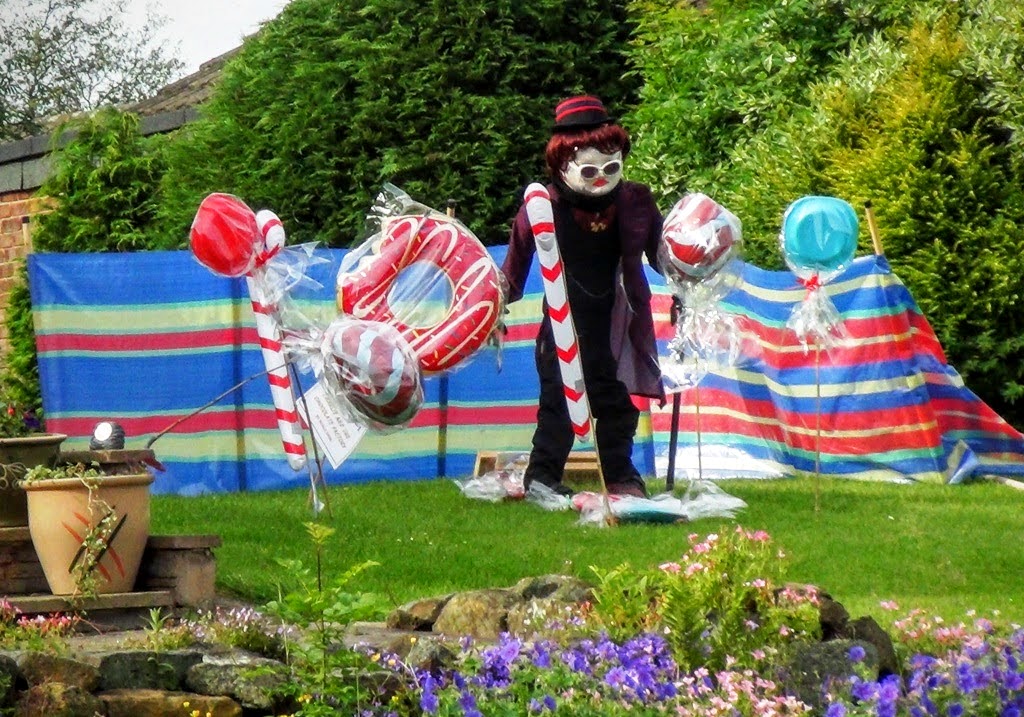 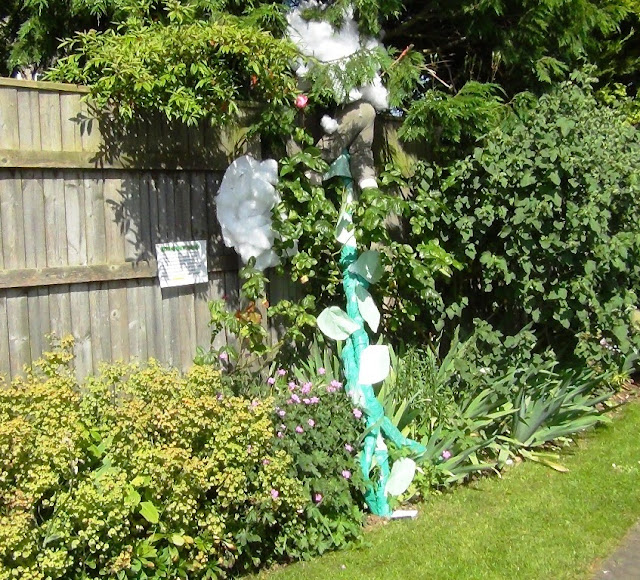 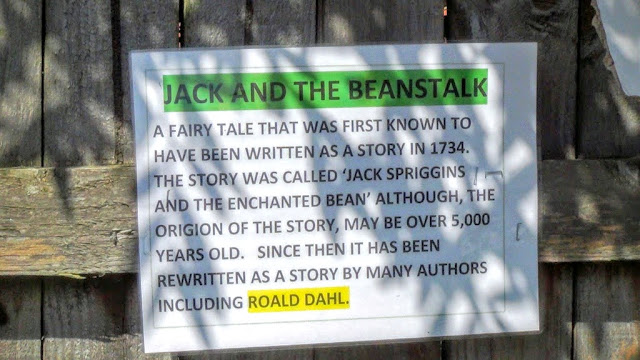 or went to tea with

While someone scared off 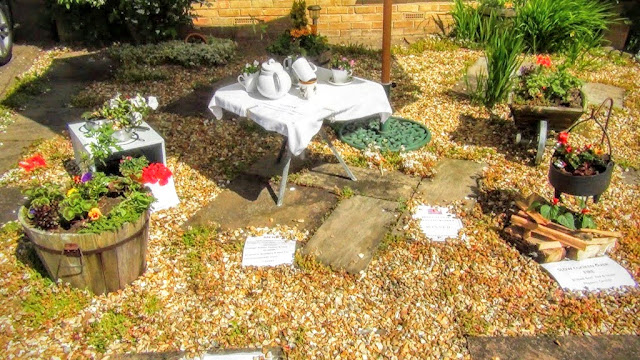 Peter Rabbit
from inviting his friends for tea.

There are still more entries to come in the weeks to come before you decide which scarecrow you like best.

Last year I was given an old album printed in 1962. It contained a stamp from 1960 commemorating the 50th anniversary of an  aeroplane's first flight.

This was the anniversary of the first flight of the plane built by Romanian engineer Aurel Vlaicu. He built four planes before he was killed in 1913 attempting to be the first to fly across the Carpathian Mountains.

I guess millions of planes have flown over the white cliffs of Dover, although as a young boy in wartime I associated them with bluebirds and did not expect to see them feature on a red postage stamp.


That was the year, as a schoolboy, I went to London to see the Festival of Britain on the South Bank of the Thames.

I've always been surprised that neither the Dome of Discovery nor the Skylon from the Festival have ever appeared on stamps.

For more red stamps check out the links at Sunday-Stamps-II-82.

Last week's theme was 'Time'; perhaps this week it should be signs of the times.


This one is past it's sell-by date.

Shillings ceased to be legal tender in 1971, but I'm sure you get the message.

For dog walkers every where -

Even if it's summer let's hope the callers get the message.

If you could only keep them off your phone.

Don't be too harsh in your judgement if people forget your wedding.

And if it's you that abandoned this caravan in a local lay-by.

Do not leave your car at these times, cos they will be after you again.

You do not need to pass this way -

On a Tuesday or Thursday evening.

I wonder whether they have Wi-fi there.

And the price has gone up again!

For other signs that may apply to you, follow others at Carmi's Thematic-Photographic-376-signs.
Posted by Bob Scotney at 08:22 1 comment:

Here is another batch of scarecrows entered in the Kirklevington village competition this year.


And one explained to me in great detail by a young girl, as well as the book.

Don't forget to check out earlier posts and those that follow to see whether your favourites won prizes.

This has been an interesting theme for me and has sent me on a wide search for details of the painters - as you will see.

John Egerton Christmas Piper became an official WWII artist and visited Coventry after the city and its cathedral was raised to the ground. His paintings of churches included the 'Ruins of St Mary le Port, Bristol. The stamp is from the same set as that by Lawrence.

A set of Ulster 71 paintings included the stamp, 'A Mountain Road.'

All I have been able to discover about the artist, T P Flanagan, was that he became the fourth (I think) President of the Royal Ulster Academy of Arts.

Details of Francis Calcraft Turner, who produced an aquatint of the Liverpool Great National Steeple Chase 1839, were even more difficult to find. The stamp was one of a set of Horse Racing Paintings & the Bicentenary of the Derby issued on 6 June 1979. 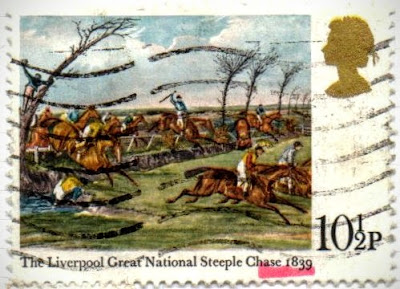 For more paintings please check out the links at Violet's Sunday-Stamps-II-81.