I couldn't find pinstripe trousers to match this week's prompt but thanks to Australia and my old pal creative commons I did find something else. 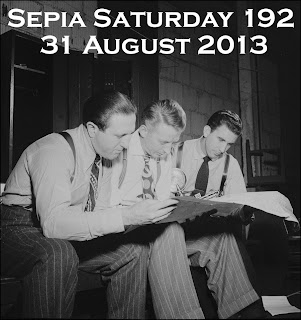 Three men, almost four, all in trousers and with two pairs of braces on view.


My post is short this week as I am at my daughter's in Michigan with three dogs waiting to play ball.

I'm not sure I have got the hang of this week's muted colours theme, but here's four shots that did not turn out as I expected.


The day was not as dull as it appears and the colours are not what I expected.

In my next shot the shade taking up half the shot gave a different look.

With a much older camera in the late 1950s there is a different look entirely.

Shooting on a foggy day definitely mutes the colours.

For other muted contributions check the links at Carmi's /thematic-photographic-258.

Africa has many of the world's most impressive animals. These two, endangered by poachers and the ivory trade, are unmistakable.


This antelope appears on an environmental conservation stamp.

A much smaller antelope with a charming name appears on my fourth and final stamp today.

I was surprised at how many stamps I had to meet this week's wild animal theme. Please check out those chosen by others at Viridian's Sunday-stamps-135.

Three of Us - Sepia Saturday

I've had a problem with this weeks prompt. 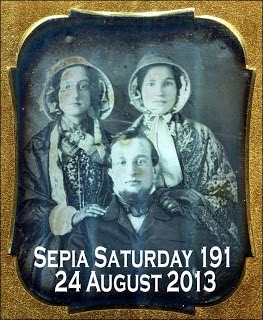 Each week I check out sites like creative commons to find appropriate shots, especially in those weeks when I'm short of photos of my own. This week I found such startling videos and photos, so much so that I re-titled this post 'Three of Us' rather than the 'Threesomes' I had intended.

I know the exact date that the first shot was taken, 55 years ago next week,


On Stamford Station, Lincolnshire waiting for the train to whisk us off on our honeymoon.

Years later in the 1980s I'm with two ladies again, as the result of a liquid evening.

My final picture was taken at Yarm Tennis Club when the juniors had some lessons from the man who was then one of the best British players, 15th in the world.

So these are my groups of three all of which will not make you blush as those videos and threesomes photos would,

For more groups of three visit the links at Sepia-saturday-191.

I Didn't Shoot It - Thematic Photography

Carmi has asked us this week to show photos we didn't take ourselves. The only way I can be absolute sure of that is to show pictures in which I appear myself.

However I'm not the important one in the shots I have chosen to show - one of which you have seen before.


A second shot from a different angle shows him (in 2010) still waiting patiently - he would never beg.

This is a position he will never take up again, but one in which I will remember him for ever.

Cody, my daughter's dog died, in his sixteenth year on Sunday 18 August when his loyal heart finally gave out.

Cody starred in many thematic photographic posts of mine where I took the shots. For more shots not taken by others please cross over to Thematic-photographic-257.

There was only one Mini Sheet that I could go out and buy - the one to commemorate Andy Murray's Wimbledon win.

I've no photos of picnics in my files and I have 'done' hats before. So I was at a bit of a lost to respond to this week's prompt. 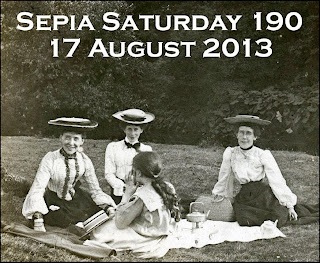 Then I remembered the man who wrote the poem 'Little Orphan Annie' which begins ...

To all the little children - The happy ones; and sad ones,
The sober and the silent ones; the boisterous and glad ones;
The good ones - Yes, the good ones, too, and all the lovely bad ones.

Little Orphan Annie's come to our house to stay,
An' wash the cups an' saucers up, an' brush the crumbs away.


James Whitcomb Riley, poses with a group of children on 15 May 1869  for a photo to be included in a book published for the Indiana state centennial anniversary. (Source The Chronicle of Your State in Pictures - Author Indiana State)

The American writer, poet and author was known during his lifetime as the Hosier Poet and Children's Poet for his dialect works and his children's poetry respectively.

I had only previously heard of his poem 'The Raggedy Man' which starts ...

O the Raggedy Man! He works fer Pa
An' he's the goodest man ever you saw!
He comes to our house every day
An' waters the horses an' feeds them hay.

I gather that somewhere in his poems he refers to a swimming hole; I haven't found the poems yet but I have found this -


This looks an ideal place for a picnic, don't you think?

If you wonder what it's called.

It's  'In Fervent Praise of Picnics' - of course.

For more picnic snacks please make you way across to Sepia-saturday-190.

I went searching in my archive to meet Carmi's 'Downward' theme this week. I had quite a choice but settled on these five..

From my brother's pictures taken during WWII.


I have no idea how my brother obtained this picture. There is one very similar in the Imperial War Museum. I have to assume that he obtained from a Fleet Air Arm pilot on the raid.

On a wet April day in 2010 I took some shots of and from the Clifton Suspension Bridge looking down in to the Avon Gorge.


I am going to cheat with my last photo, I was not looking downwards but ....

For more downward views check out what others have done for Carmi's thematic-photographic-256.

Viridian's call this week is for us to show colourful stamps. I've chosen to go 'down under' with some butterflies.

These five are from a set of twelve issued then. They are:


For more colourful stamps you need to flit across to Sunday-stamps-133.
Posted by Bob Scotney at 09:31 11 comments:

There was a time when a car would have been regarded as a newfangled contraption. I'm not sure that the prompt falls into that category. 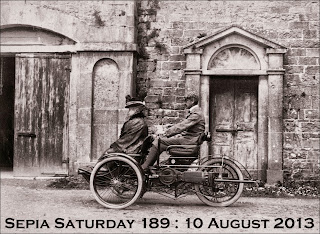 At a time when we are told that the great motor city of Detroit is in trouble we may need reminding that not all newfangled ideas caught on.

However manufacturers had been long sighted enough to have to have a highly valued electric car. This one with the delightful name of Grandma Ducks Car made it to the Brussels Autoworld Museum in 1916


In this car both the bonnet and boot spaced were used to carry batteries used to propel the car. The Brougham body was typical of American cars which were appreciated in city use for being clean and quiet. They were highly valued for social events such as parties, galas and theatre visits.

We are right to ask whether the car industry has learned anything since.

Detroit cars made it all round the world and here's an early one I would have liked, but it was before my time.

I know nothing about today's electric cars either in Detroit or in the UK. The local TV in North East England recently reported that 25% of charging points for electric cars in the area had never been used. And only last week there was a report that the Liberal Democrats were considering adopting a policy of banning petrol and diesel cars from 2041. Guess that's an idea that I shall never see - it would make me 104!

For other way out contraptions - newfangled or otherwise - drive over to Sepia-Saturday-189.

I knew exactly which one of my photos I would choose for Carmi's repetitious theme. However as you have seen it before I'll save it till later and show some I took today.


Although it is still summer Yarm School is setting up its playing field for winter games and provided me with an H or two, or - well you count them.

I though I would also show the photo from a different 'angle'. 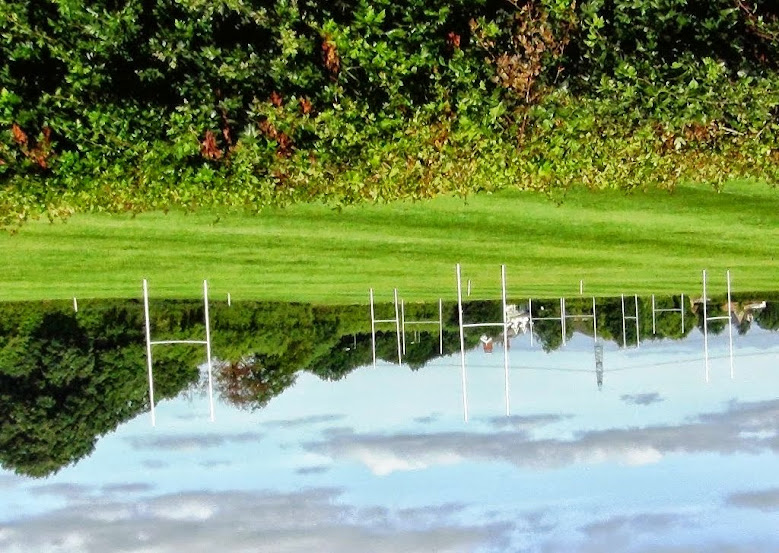 Finally the one you've seen before, but which I thought worth repeating.

For other repetitious interpretations cross over to Thematic-photographic-255.

As many people (not me) go out for a drive on Sundays I thought I would show cars for this week's open theme.

I obtained this from a flea market stall in Stockton-on-Tees. There is no clue about who owned it, but it has been around a bit as Bolton, Bury and Wigan are the other side of the country from Stockton. You can also see from the Oxfam sticker that it has spent some time in a charity shop.

The cars are from left to right:


To see what others have chosen this week cross over to Viridian's Sunday-stamps-132.
Posted by Bob Scotney at 15:01 10 comments:

Signs of the Times - Thematic Photography

On my Wednesday morning jaunt I often stop at my favourite coffee shop in Yarm - Coffee @ Elliotts. Some of the walls show signs of times gone by.


Another headline from the Sketch on page 15 had this to offer:

The Daily Sketch founded in 1909 was described as Britain's oldest tabloid newspaper when it closed in 1971 when it was merged with the Daily Mail.

Stockton-on-Tees High Street reputedly the widest in England is in the middle of a redevelopment. At one of the street I found this:

Restoration work of the theatre has been underway for a number of years but has recently stalled. It should have reopened by now but has still to be completed. The restoration overseen by English Heritage is meant to maintain its Art Deco character. Among the faces on the mural are Paul McCartney, Buddy Holly and Roy Orbison.

The Beatles played here twice; the first time on the night of 22 November 1973, the day that JFK was assassinated.

Whether the building remains a sign of times gone by or is a sign of things to come remains to be seen,

The theatre shot includes two established road signs. A local road has something much more modern.

I've waited days to get a shot of it illuminated by a speeding car - but have never been quick enough to catch one. Meanwhile a much more mundane warning is on the road itself.

For more signs of progress, or perhaps not, please check out what others have to show by visiting Carmi's Thematic-photographic-254.