As I have no stamps from Antarctica nor the British stamp depicting Captain Scott I have  settled for showing my stamps from Australia and New Zealand. You may have seen some of them before.

Australia was an appropriate choice this week as it marks the end of the Queen's 16th tour and the proposed change in succession so that first born girls can become Queen in their turn.

I've always liked the first one with the kangaroo on the map.
There's a bit of snow on the mountains here even if there are no Antarctic scenes. The Kiwis will have to settle for winning the recent Rugby World Cup.
To celebrate other stamps you need to visit Viridian's Sunday Stamps 42
Posted by Bob Scotney at 08:02 10 comments:

Whenever I look at this aerial photo of the town of Yarm in North Yorkshire it seems the wrong way round.

That's because if you live south of the town, as I do, you come into the High Street from the right as you look at the picture.
At the left you can see Yarm Bridge just beyond the viaduct. The bridge was built in 1400 way before the young whippersnapper that now dominates the town.

I've never attempted to count the arches but even these details do not prepare you for the size of the thing.
The Viaduct was built to extend the Leeds and Thirsk Railway from Northallerton to Stockton and Hartlepool; the line eventually being extended to Newcastle as part of the Leeds Northern Railway.
Cars look like toys beside the structure as it bestrides the town. 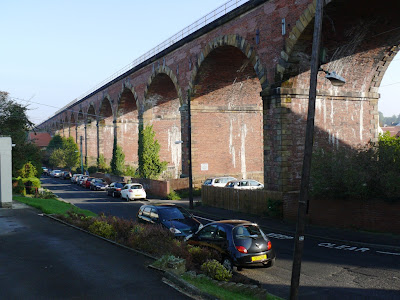 The red roof at the left of this picture is Hope House which I have shown before.

I've never succeeded in getting a shot of the viaduct in use so I've had to borrow one/
Photographer - Ian Britton (ex www.freefoto.com)
(Creative Commons Attribution-Noncommercial-No Derivative Works)
Posted by Bob Scotney at 20:20 4 comments:

Omnibuses always remind me of the song ‘Transport of Delight’ by Michael Flanders and Donald Swann. For those that don’t know it you can check out the lyrics  here.
One of the oldest pictures I could find was of these omnibuses of William Winterbottom, Hill End, Brisbane, ca 1889 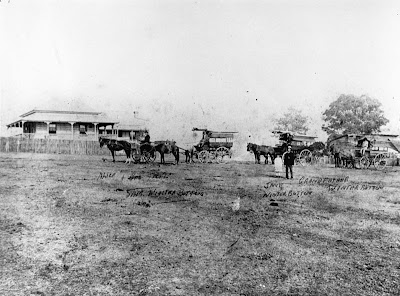 (Held in the John Loxley Library, State Library of Queensland)
The fleet of omnibuses is stationed outside some houses at the Hill End area of West End, Brisbane. Members of the Winterbottom family are posing with the vehicles.
Then I found these stereoscopic views from the Robert N Denis collection created in c1889, currently located in the New York Public Library

South-Ferry, New York. Arrival and departure of omnibuses to all parts of the city.
Publisher: E. & H.T. Anthony (Firm)
The first recorded use of the word 'omnibus' as a designation of a vehicle occurred in a printed memorandum dated 3rd April 1829. Written by George Shillibeer (1797-1866) to John Thornton, the Chairman of the Board of Stamps (from whom a licence to operate in London was required), it announced that Shillibeer was engaged "…in building two vehicles after the manner of the recently established French omnibus…"
Shillibeer's service, between Paddington Green and the Bank, commenced on 4th July 1829 and introduced a new type of vehicle to the roads of Britain. This date is generally regarded as the start of omnibus history in Great Britain.
Shillibeer's first vehicles were box-like structures pulled by three horses abreast, with a rear entrance on which the conductor stood. Seating was on longitudinal benches with passengers facing each other. Later vehicles, including those of other operators, were generally smaller, pulled by just two horses. 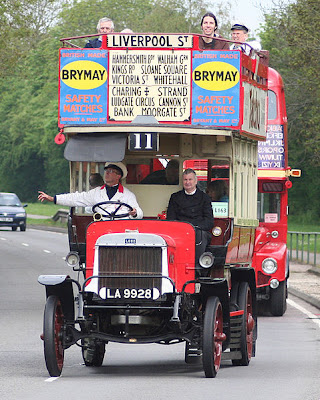 The vehicle behind is the Routmaster RM1, a celebrity vehicle in its own right, reduced to providing service as a tender vehicle for the day and given the job of following the B Type for 70 miles to Brighton. And back!
Now if you wish you can listen to the Flanders and Swann lyrics sung by Ian Wallace at http://www.nme.com/nme-video/youtube/id/zT0lmusukAE

To visit other sepia posts check out Alan's Omnibus 98
Posted by Bob Scotney at 14:28 19 comments:

I'm not into heavy metal but have found some interesting photos for this week's theme.

This grating prevents you accessing a waterwheel.
Last week I showed a photo of Hope House for the triangular theme. A number of you commented on the viaduct dwarfing the house. This week I'll maintain the viaduct connection.
One day I 'll post more about the viaduct but now I'll switch from a metal plaque to railings across the Atlantic in Michigan.
For other metallic wonders please check out posts at Carmi's Metallica
Posted by Bob Scotney at 07:43 22 comments:

The second postcard of Hartlepool  I came across in Stockton fleamarket was this view of the Hartlepool to Middleton Ferry.

From 1854 to 1952 the ferry from Old Hartlepool to Middleton provided a means for Hrtlepool people to get to work. The 35 foot boats used had to cover only a short distance of c100 metres. From the 1800s people were employed in boat yards on Middleton beach. The village of Middleton, named after a local Methodist and friend of John Wesley, no longer exists.
The Museum of Hartlepool's photostream has the picture of the ferry boat being rowed by two men.
The e-podunk website for Hartlepool has a postcard of the ferry in operation. Unfortunately they have not responded to my request to use their picture but you can see for yourself by visiting them here
The last ferry stopped soon after the last true ferryman slipped on the ferry steps.
The ferry man, Bull Boagey, cracked his head and died in 1951 while returning from a fishing trip.
Posted by Bob Scotney at 19:50 5 comments:

I thought I would work south this week down towards Australia ready for  next week's theme at Viridian's Sunday Stamps.

North Borneo changed its name to Sabah in 1964 and is now part of Malaysia.
My final stamps are from an island at the south of the Malayan peninsula, formerly part of the Straits Settlements.

Singapore was part of the Malaysian Federation from 1963-1965. It's now an independent republic within the British Commonwealth.
For an insight into other stamps from the area please visit Sunday Stamps 41
Posted by Bob Scotney at 09:00 7 comments:

All The World's A Stage - Sepia Saturday

Let me introduce you to the 'Dramatis Personæ' in my school pictures this week.
All you have to do to play the game is to locate these three actors in the photographs of their schools.
Sorry, but you are not to be given any clues other than that there is a certain logic in how the photos have been posted.
The final group of youngsters comes from Yarm also.
For those concerned with posture here's a group of teachers showing how ankles should be crossed.
To see what prompted my choice and others' interpretations you should check out Sepia Saturday 97
Posted by Bob Scotney at 12:59 25 comments:

Carmi's photographic theme this week is 'edible' so I thought I would go out on a limb and offer you the choice of snails.

If you don't fancy the pattern on the shell perhaps the morsel inside will tempt you.
The next offering is larger (well a bit) - but could you look it in the eye before consigning it to the pot?
The observant amongst you will recognise another type of leaf on the right of this shot. You could always collect a few and try a drink of nettle tea.
If drinks are not allowed with edible things I wonder what happened to those in my final picture this week.
Just a few things prepared for and despatched at an earlier Christmas time.
Still feeling hungry? Then visit other edible treats at Carmia at thematic photographic 167
Posted by Bob Scotney at 13:29 8 comments:

I had quite a lot to choose from for this week's Asian theme but settled for stamps from just two countries.

I imagine we all know something about the first country - but I have no information on the stamps.

I've shown a flower stamp from this country before.
Four of these show animals native to the country and the fourth commemorates the 1960 Rome Olympics.
For other Asian stamps please check out Viridian's sunday stamps 40
Posted by Bob Scotney at 07:50 8 comments:

I showed a few photos before at My Brothers War but Alan's photo this week enables me to post some more. Four men are in this one too.

My brother Arthur is on the left. Unfortunately I do not know where the picture was taken or who the others are.
His album contains a lot of action photographs including a number of what I believe is a Supermarine Walrus flying boat like this:
(The picture came from "Aircraft of the Flying Powers", Volume I edited by HJ Cooper, OG Thetford and DA Russell, Harborough Publishing Co., Leicester, England 1940)

The Walrus used for reconnaissance would be catapulted off the aircraft carrier.
I believe the structure you can see below the plane is a catapult mechanism. But how did it get back on board?

The aircraft carrier would slew to one side creating a smooth surface in its wake on which the plane would land.

Then the plane would be quickly brought alongside.
His job is to hook up the aircraft to the carrier's crane.
I have put these pictures together in sequence based on a desciption of the operation I found on the web. Hopefully it makes sense and Arthur's pictures fit together.

When I saw Carmi's triangular theme I searched the house for something that matched. All I could find was this souvenir of my time in Norway.

Looking for other triangular shapes was more difficult until I remember a photoshoot undertaken for a different reason.
OK, I know the plaque is rectangular but you can't say the same about Hope House itself, dwarfed by the railway viaduct in the North Yorkshire town of Yarm.
I started this post in Norway so I'll finish there as well with a shot I'hope you don't get hooked upon.
On second thoughts I found an appropriate ship with which to end.
How many triangles have I shown? I'll let you count them, and others at Carmi's Thematic Photographic 166 triangular.
Posted by Bob Scotney at 19:18 8 comments: