I've had to raid my archives again from the pre-digital era, 1980 in fact.


Heraklion is the capital of the Greek island of Crete.

The photographer was not aware of the passerby that muscled in on the next shot. 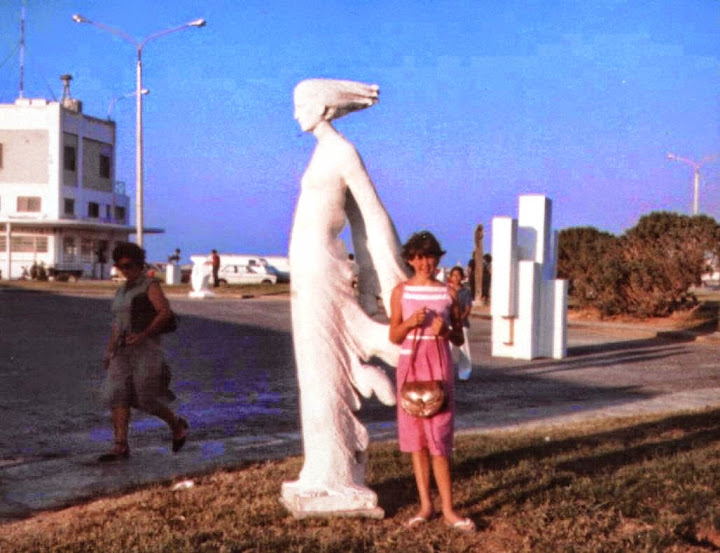 Despite staying in a modern hotel (well modern in 1980) outside Heraklion we seemed to spend a lot of time at another establishment.

That's George in the cap on the right. His beer was cheap.

If you ever go to Crete the place to visit is the ruined Palace of Knossos which dates from around 2000BC. My efforts with a camera there were so appalling that I only have one shot 'good enough' to show.

Of course the sun always sets in places that are far from home.

I'm hoping that the skies are as clear tonight so that I can get a shot of something that is really far away  - the Blue Moon of July.

Meanwhile I'll just have to be content with others' places far from home found by following the links at Carmi's Thematic-photographic-343.
Posted by Bob Scotney at 18:48 2 comments:

The envelope containing my Fathers' Day card from the USA this year arrived late (12 days in the post). However the stamps more than made up for that.


I recently discovered that Bulgaria is one of the most important rose breeding countries in Europe. Roses appear on many of their stamps. A set of eight stamps shows four types of rose.

What better way to say it with flowers than with roses like these.

To see what other flowers have bloomed this week just follow the links at Sunday-stamps-ii-32.

Is it a bird or is it


Carmi's theme for Thematic Photography this week was 'Sky.'

The day after I posted my entry this floated by. By the time I had grabbed my camera and was in a position to shoot. the 'wing' had begun to separate from the 'plane.'

For my first shots and others who posted sky shots check out the links at Thematic-photographic-342.
Posted by Bob Scotney at 18:34 1 comment:

Having waited all week to have a sky worth photographing I've given up and gone back to shots from my archives.

From a shot exactly eight years ago to one slightly earlier in Cornwall.

The elevated house in the centre of the picture was then the home of Dawn French and Lennie Henry. The house obscured by the rock on the right of the beach was occupied by author Daphne du Maurier in 1943.

I shown shots of Stockton's Infinity Bridge before where the sky has enhanced the photo significantly. Here's another one.

Finally one taken from our front garden.

For more shots of the sky please visit the links at Carmi's Thematic-Photographic-342.
Posted by Bob Scotney at 19:17 5 comments:

Why did I suggest butterflies as a theme when I had shown several butterfly stamps before?

In the April A-Z Challenge earlier this year I took butterflies as my subject and discovered then that many countries had them on their stamps.

Back in 2012 I cheated when I showed a set of stamps scanned from a catalogue. Now I can show them on an FDC acquired since then.


By coincidence the Big Butterfly Count 2015, run by the Butterfly Conservation, has started this week in the UK. I know that we shall see the Peacock and the Tortoiseshell in our garden but not the other two.

Ones that will not appear are:

Now you need to float like a butterfly over to the links at Violet's Sunday-stamps-ii-31.

I'm off to watch The Open at St Andrews on the TV where I can be sure I won't get stung by a bee.

I rarely took good photos with cameras before digital cameras came along.

It was as recent as 15 years ago that I bought a FinePix 2600Zoom and gave my Olympus 10 to my younger son (who promptly sold it!)

Later I invested in a Panasonic Lumix, the one you have seen before. 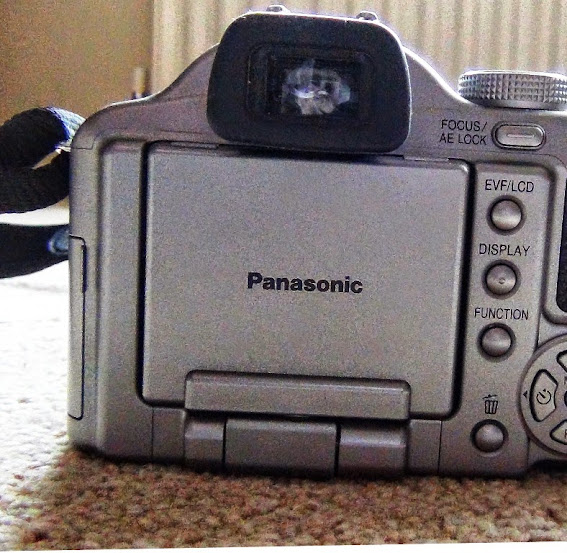 This is the camera I use most of all - in automatic mode and for macro shots.

In the last few years I also invested in a Sony digital HD video camera recorder with which I took the shots of the FinePix and the Panasonic. Its only slightly larger than the FinePix and can be carried easily in my trouser pocket.

In the photo mode the zoom is superb, so much so that I can see the pattern on the wallpaper in the bedroom across the road!

I have to confess that I regard the phone on my camera as a toy and rarely take photos with it.

I never seem able to hold it still. Usually I will go back to the same spot and use the Sony instead.

My wife has an i-Pad Mini which gets used occasionally. This was one of first shots taken with it.

I wonder what happened to my head.

For other cameras in use check out the links at Thematic-photographic-341.

As the finals at Wimbledon are being held this weekend I looked for tennis stamps.


This stamp was to commemorate the 80th anniversary of the tennis organisation in Czechoslovakia.

It wasn't to be Andy Murray's year this time but:

From Australia I found an Olympic diver

If that date stamp is 1976, the Olympics were in Montreal that year.

I can still touch my toes but there is no way I could ever look as graceful as that.

Perhaps I would do better at archery in a European Championship.

I searched hard to find a stamp relating to women's football to celebrate the recent World Cup in Canada and England's relative success in finishing third.

I had to settle for the men's moment of glory in 1966 instead.

Get your tickets for other sporting events through the links at Sunday-Stamps-II-30.
Posted by Bob Scotney at 09:00 7 comments:

Some photos from my archives and just one shot specially for the 'Liquidity' theme set for us by Carmi this week.

Not a ship in sight and the beach to himself -


Same beach at a time to wrap up warm its seems.

But if it's a swimmer you want to see -


However this is the liquidity that I enjoy.

For other liquid assets that others have acquired check out Thematic-photographic-340.
Posted by Bob Scotney at 13:32 8 comments:

I've used up all my postbox stamps before so I shall have to use some stamps that I didn't realise were part of a postal issue.

I'm sure however that no one would forget to use the postal code if they had a stamp like this.

The next three stamps were 'scattered' across an album page. It was only when I searched for mail related stamps that I found they were a part of a postal issue set from 1974.

All I have to do now is to find the other one that makes up the set - a postilion on a horse.

For postboxes and postal themes from other countries just follow the links at Sunday-Stamps-ii-29.

Kirkfest Scarecrows 2015 - The winners are:

Now's your chance to see whether your favourites chosen in posts I - IV made it to the winners enclosure.

Those awarded a Certificate of Merit were;


And on the podium -
Third Place:
Second Place:
But the Winner is:

Did you pick a winner or an also ran?
Posted by Bob Scotney at 13:08 3 comments:

This is the last group I have to show. My the end you need to have chosen your favourites from the four posts (I - IV)


June 25th was designated Orange Day by the UN in its campaign against violence to women.

Now you seen all that the judges had to pick from. Look out for the next and final post when the winners will be revealed.