Viridian has chosen to celebrate China and the year of the Dragon this week.

China’s first stamps appeared in 1878 and had dragons on them! They are known as “large dragon stamps” and are very rare. I wish I had one of them, but the nearest I can offer you is a an image of a stamp from 1897.


In the year of the Dragon, many different countries issue dragon stamps. The year 2000 was a dragon year, and dragon stamps were issued in Macau, U.S.A, Canada, Christmas Islands, Hong Kong, Japan and China, of course. I'm told that the first Japanese stamps in 1871 also depicted dragons.

I looked hard for other dragon stamps and was disappointed to find I had very few. However I was pleased to find this dragon's head on a Norwegian stamp.


Viking longships had dragon heads like this on their prows. However I have not been able to confim whether these are dragons on these other stamps from Scandinavia. Perhaps someone can tell me whether they are.

I looked hard to find stamps with komodo dragons but had to give up as my stamps from Indonesia had pangolins.

I was on much safer ground closer to home as a dragon is always depicted on the regional issues from Wales.

1971 was the year Breat Britain changed from pounds, shillings and pence to decimal currency.

My favourite dragon stamp is one I don't possess - it's from the set of mythical creatures.

Since I joined Sunday Stamps I I have been visiting a stall selling postage stamps at Stockton Market. This week, mixed in with First Day Covers, I picked up a booklet labelled Rotterdam.


Inside I found nine unused postcards showing views of Rotterdam all in good condition, but obviously old. I have since discovered that Weenenk & Snel from the Hague have produced many views of the cities and towns in the Netherlands most of which are from the early 1900s.

This is one of the cards in the booklet.

The back of each card is the same, except for the Rtt number you can see on this view.

Plan C is identified Rtt 015. All cards have the Weenenk & Snel, den Haag triangular logo. The dotted line at the right is the perforation which allows a card to be removed. There is no evidence that any have ever been taken out.

In trying to identify the age of the cards I succeeded in finding another view of Plan C, together with a date of 1915, but unfortunately this date is not on the card.

This is obviously the same view.

The city of Rotterdam was badly damaged by German raids during WWII, with the center of the city being razed to the ground. So far I have been unable to place the location of the photo in modern Rotterdam.

I would welcome comments, especially those that can identify the location of Plan C.

I will show the other cards in later posts.
Posted by Bob Scotney at 19:35 2 comments:

On 25 January 1759 Robert Burns was born in Alloway, three miles from Ayr. Tonight people will celebrate the anniversary of his birth at Burns Suppers all over the world.

It is a sheer coincidence that I visited a market stall today in Stockton-on-Tees and discovered a wallet of postcards from Ayr, six in all, four of them related to Burns.


The Brig o' Doon was the late medieval bridge used as the setting for the final verse of Burns poem Tom O Shanter.where Tam, on horseback. is being chased by Nannie the witch. He is just able to escape her by crossing the bridge (over a running stream) narrowly avoiding her attack as she is only able to grab the horse's tail which comes away in her hands. Today a plaque stands next to the bridge:

The fourth card contains the memorial to Burns.

For those postcard collectors among you the cover of the 'concentina' wallet is missing and there is no other information included to enable me to identify the age, date or origin of the cards or who created them.

Alan's picture prompt opened a lot of memories for me, but there was one majestic opening event at which I wasn't present.

However 50 years later I was in my first job at Redbourne Steelworks in Scunthorpe, Lincolnshire. This building stood then on the corner of Oswald Road and Mary Street.

You can see that the cinema is looking the worse for wear and in 2007 it was demolished just leaving this wall..

However there is a Majestic still standing in Harrogate in Yorkshire where I spent many a happy hour. British Steel used to hold conferences there and where it fell to me, on one occasion,  to present a paper on a steelwork's trial conducted at Redbourne and Park Gate Works, Rotherham.

You may take shots that that show motion as a blur, but my selection for Carmi's theme of  'Movement' has frozen the action at the time. Motion on land, water and in the air has been caught in these photos taken in the USA and the UK.


The turkey vulture (or turkey buzzard) is an ugly looking bird in close-up but elegant when it glides around looking for a carcase to eat,

I'm not sure what this is, just let's say I wouldn't want to swim to close to it.


This may have been larger but at least it's (h)armless I'm told.

I feel much safer with this fellow caught in mid-stride.

I wonder whether he tackles that snake and the thing I don't like.

Here's something ideal for a hot day.

Closer to home water is still the theme. A competitor practising his paddling skills.

This facility has just been upgraded and is to be used as a practice centre for London 2012 Olympic Games.

My next shot shows my grandson in surfing action.

Finally an all time favourite shot of a granddog.

Now I guess, it's time for you to go and study more movement at Written Inc's thematic photographic 180
Posted by Bob Scotney at 13:15 11 comments:

The use of postage stamps started in Great Britain with the famous Penny Black in 1840.


As the stamps were only for internal use the country's name was not included on the stamps; later it was agreed internationally that British stamps did not need the name but all should contain the sovereign's head. In fact there has only been one stamp that has included the name Britain - the stamp commemorating the Festival of Britain in 1951.
Use of the Penny Black was discontinued when it was replaced due to the black colour not showing postmarks clearly. The Penny Red took its place.

I have only one stamp showing Queen Victoria who reigned from 1837-1901 and I have shown this before.
There is another stamp of the same value and colour as this. The difference between lies in the design; the stamp I've shown has 16 dots around each corner, the other only 14.

After Victoria Great Britain had four Kings as shown on these stamps from my collection.
I've shown a reproduction here as my Edward VII stamps are so heavily postmarked.

These are the only four stamps issued for Edward VII before his abdication.


These early stamps from George VI's reign include the commemorative for his coronation.

Our present Queen came to the throne in 1952 and is to celebrate her Diamond Jubilee this year.


The first stamps issued became known as the Wilding issues as they were based on a portrait of Queen Elizabeth II by photographer Dorothy Wilding. Variations on this theme were used until 1967, when the Machin issues were introduced. The Machin design is a profile of the queen on a solid back ground.

In 1971 the currency was decimalised so the stamps changed again for the new values.

To save stamps from Great Britain you have always needed to recognise different water marks. In addition technical improvements in printing mean you also need to be able to identify graphite lines on the back of the stamp, phosphor bands (all over, single or double), position and design of the demonination value.There are literally hundreds of varieties.


With the advent of first and second class postage rates the demonination has been removed and in my opinion the design has been ruined by unsightly postage class numbering.


As you can see there is also a different stamp and charge for large envelopes. Postage rates have gone up by over 4000% since Queen Victoria''s days. She would not have been amused.

To amuse yourself further you should view other stamps at Viridian's Sunday Stamps
Posted by Bob Scotney at 09:16 6 comments:

I was sure I was going to have problems this week until I remembered.


But when we had an electrician working in our loft earlier in the week others saw the light.


Originally this doll had a bottle which when filled with water resulted in the doll wetting herself. No bottle now and you can't see that she has lost her knickers. She is still the proud owner of a carry cot equiped with a pillow and blanket to keep her warm, and with a cover and hood to keep her dry.

She had a companion in the loft whom I thought had gone to a charity shop some time ago. So let me introduce, from the same era:

As her name implies she wept realistic tears. Perhaps she now fears what is going to happen to her.

Much to my surprise I found another doll on display in our house. So here's a Brazilian who seems to wink at you.

So that you get some idea of size here are the three together - rivals to the Pussy Cat Dolls? 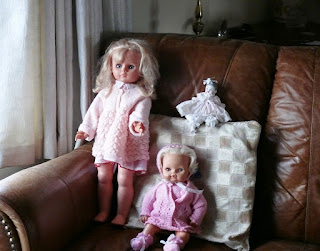 The family favourites have travelled a bit, probably more than the Brazilian. So all the way from Peru we have:
I hope you will agree that bears are allowed as well as dolls. Teddy made his intoduction at an early age.


He even took precendence over Paddington and the heartthrobs on the wall.

Teddy has been all round the world and now resides with Paddington in the USA. He still looks good to this day.

Meanwhile his larger brother Herbert has had his share of love.

But Herbert wants to know when his turn will come to leave our loft and wend his way to the USA.

For tales of other dolls you now need to switch to Sepia-Saturday 109.
Posted by Bob Scotney at 14:18 22 comments: