Last year I spent a holiday in Michigan and decided to try a spot of fishing.

Have you ever had the feeling that something’s watching you?

I had spent two hours fishing without even a suggestion of a bite from anything other than the ever present mosquitoes when I became aware of a pair of eyes watching my every move. 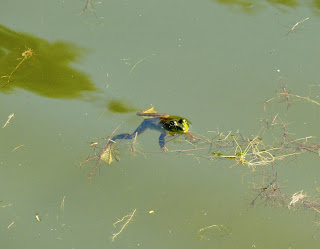 Rana clamitans, the American Green Frog, was sunning himself on the surface of the lake.

He, or was it she, occasionally stirred a leg to paddle slowly in my direction. Then Cody, the red retriever who spends hours every day trying to catch frogs decided to take a paw. Missed again Cody. Rana just dropped its nose and was off to the depths of the lake. 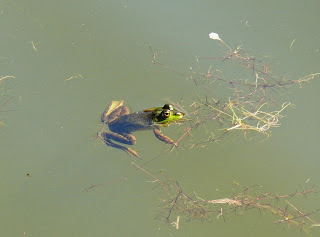 Before this happened I had managed to get my camera out and take some pictures of the frog and of another at the other side of the lake. 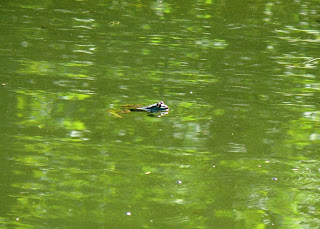 Next day I sent the photos to the Michigan Department of Natural Resources who were kind enough to identify the frog as Rana clamitans. 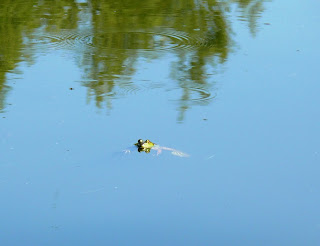 They gave me links to more details of its life cycle from one of thousands of eggs with up to two years to survive as a tadpole before becoming a frog.