I led a lot of training courses in Denmark but never visited one of the country's UNESCO World Heritage sites which has a large stone ship, two large burial mounds and the Jelling standing Rune stones. This stamp is from a landscapes series.

Jakarta was the venue of the first Games of the New Emerging Forces (GANEFO) set up by Indonesia in 1963 as an alternative to the Olympic Games. The 36 member GANEFO sporting federation established in the same year only held one subsequent event - in 1996.

Indonesia issued a series of stamps to commemorate the Jakarta games.


The following stamp commemorated a 50th Anniversary in 1968 but the Curtiss JN-4D plane was nicknamed 'Jenny ' because of its designation letters. It was the US's favourite training aircraft during WWI.

For more 'J' related stamps fly over to Sunday-stamps-j.html
Posted by Bob Scotney at 09:06 4 comments:

I could have show this under H - for but saved it for this week.


This commemorated the 50th Anniversary of the University of Iceland. Björn M. Ólsen was the first rector in 1911.

Another 50th anniversary occurred on 21 January 1969 - for the Irish Parliament.

Karl Oscar Isakson was a Swedish painter who spent much of his professional life in Denmark where he is considered to be one of the fathers of Modernism.

For other 'I' related stamps please visit Sunday-stamps-i.
Posted by Bob Scotney at 09:25 4 comments:

I hesitate to enter into American politics but do so with a stamp from Ecuador. 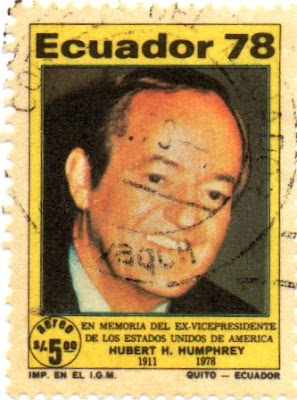 This stamp was issue to commemorate Hubert Humphrey on 28 November 1978. Humphrey had been the 38th Vice President of the USA from 1965-69 under Lyndon B Johnson. He stood as Democratic presidential candidate in 1968, narrowly losing to Nixon by only 510,000 votes.

The woodwinds that open Citizen Kane, the shrieking violins of Psycho and the plaintive notes of the saxophone of Taxi Driver were all the works of Hollywood composer -

I wonder whether Humphrey saw these films and heard Herrmann's music.

For other H related stamps cross over to Sunday-stamps-h.
Posted by Bob Scotney at 09:16 3 comments: 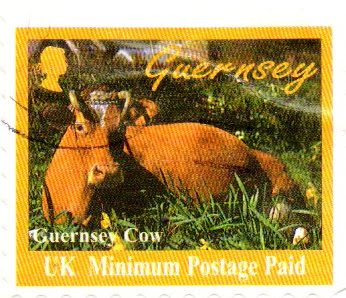 The Guernsey cow was first recorded as a separate breed around 1700. Import of foreign cattle to the island was banned in 1789. The English Guernsey Cattle Society was established  in 1884 to provide a record of the ancestry of imported Guernsey cattle.

I have been unable to find out when this minimum postage paid stamp was first issued.

When it comes to garden birds this is one, on a Hungarian, stamp that frequents our garden throughout the year - although it colours are not as vibrant as this.


You can examine other 'G' related stamps by following the links at Seeitonapostcard.-g.
Posted by Bob Scotney at 08:52 7 comments: