I have some Nobel Prize winners for you this week.

The Royal Institute of Chemistry's centenary was commemorated by a set issued on 2 March 1977.


In addition each stamp commemorates the work of Nobel Prize winners.

I remember studying the work of the Braggs (father and son) in chemistry and metallurgy, but the other names are new to me. Or is my memory failing?

To see what others have chosen for this week don't forget to check the links at Viridian's Sunday-Stamps-189.

My father and at least one of his brothers served in WWI, my brothers in WWII. I have no photos of them in uniform except for copies of war photos of my elder brother in the Fleet Air Arm, some of which I have shown before.


My sons have not had to join the forces but did turn out in uniform.

Although I did two years (mandatory, then) National Service in the Royal Signals no photos of me in uniform exist.

In August this year the town of Yarm held a service at the war memorial to commemorate the centenary of the start of WWI. Men and a few women in uniform took part.

My old Sergeant Major would have had a fit.

Later there was a drum head service in another part of the town.

When the fun fair began I just wonder whether it was as entertaining as this.

Now march over to the links at Sepia-Saturday-247.

O what a tangled web we weave...

Spun on a September morning,

I have used many of my animal stamps before and as you might expect a lot of big mammals appeared on stamps from African countries. I'm sure you will recognise these from Benin.

I had to find out more about Benin and the postmark gave me a clue to the capital city of Cotonou.

These are two stamps from a set of 7 issued on 20 September 1995. The highest denomination (300f) is part of a mini-sheet for Faune Africaine which shows a magnificent elephant.

I acquired two more of the set at the same time.

Aepyceros melampus and Pan troglodytes are their scientific names.

The International Union of Conservation of Nature's Red List of Threatened Species includes the Chimpanzee which ironically is possibly extinct in Benin.

To see other mammals you should visit the links at Viridian's Sunday-Stamps-188.

When I saw the tents in the prompts for the next two weeks I knew I was in trouble - which photos do I show when even the sailor suit caused a problem of sorts. 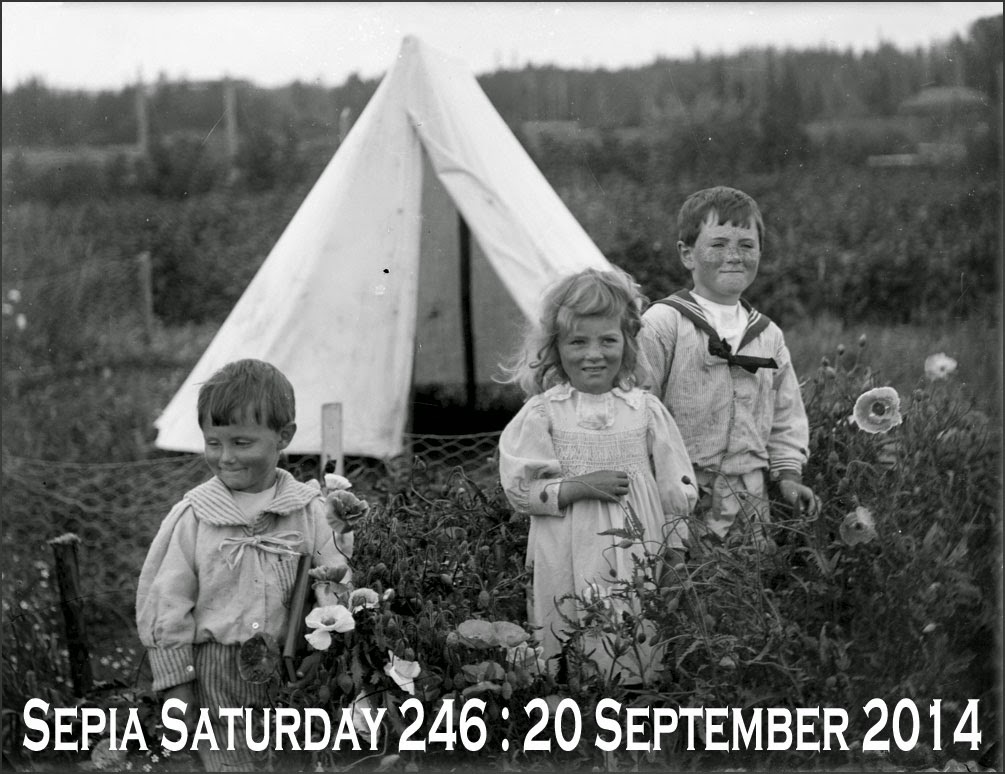 Looks peaceful and a time for fun,

However during wartime in the Mediterranean it was serious business for my brother ashore during his Fleet Air Arm service in WWII.


This was probably in Egypt where it was warm enough to:

Recovering aircraft or operating a desert airstrip was even less luxurious.

I'm left to wonder as I never saw these pictures while he was alive. If I'd asked where, he'd probably have told me I didn't want to know.

After all when he left to go to war I was instructed to tell anyone who asked that he had gone to stick a bayonet up Hitler's arse.

For other experiences under canvas I suggest you check out the links at Sepia-Saturday-246.

In the Pink - Thematic Photography

I suspect that many of us this week will be showing flowers of one sort or another in Carmi's 'In the Pink' theme.

I had some dahlias in a post on summer last week but had to take another shot to show a bank of pink.


I often have trouble judging what is light red and what is pink but in our garden I can always ask.

In the village this seems to be a favourite flower, although it depends on the type of soil to have whether it is blue or pink.

Elsewhere there are pot and pots of these:

We even have a few but no bush that  has blooms like this.

I just have to find out what it's called.

At this time of year it's difficult to stay 'in the pink' as this fallen apple shows.

While others work at staying fit.

It's not necessary that "She Stoops to Conquer." After all she can show anyone the way to Goldsmith's works.

Now all you need to do is don hunting pink and seek out the links at Thematic-photographic-309.

This should have been an easy theme if I had not shown most of my car stamps before. I've had to go back to the 'Celebrate the Century' stamps from the USA.

I've bent the theme a bit with stamps from Germany and Canada - well there is at least one car on them.

This was from a safety series issued over several years and shows a child playing with a car approaching.

My Canadian stamps just has a street scene with an automobile or two.

Meanwhile on my wish list is a set from 13 January 2009 on British Classic Designs (both stamps are scanned from a catalogue.)

So far these have not turned up on my favourite market stall.

For other automobiles and forms of motor transport check out the links at Sunday-stamps-187.
Posted by Bob Scotney at 10:56 8 comments:

This week's prompt made me think of the ways things used to be. 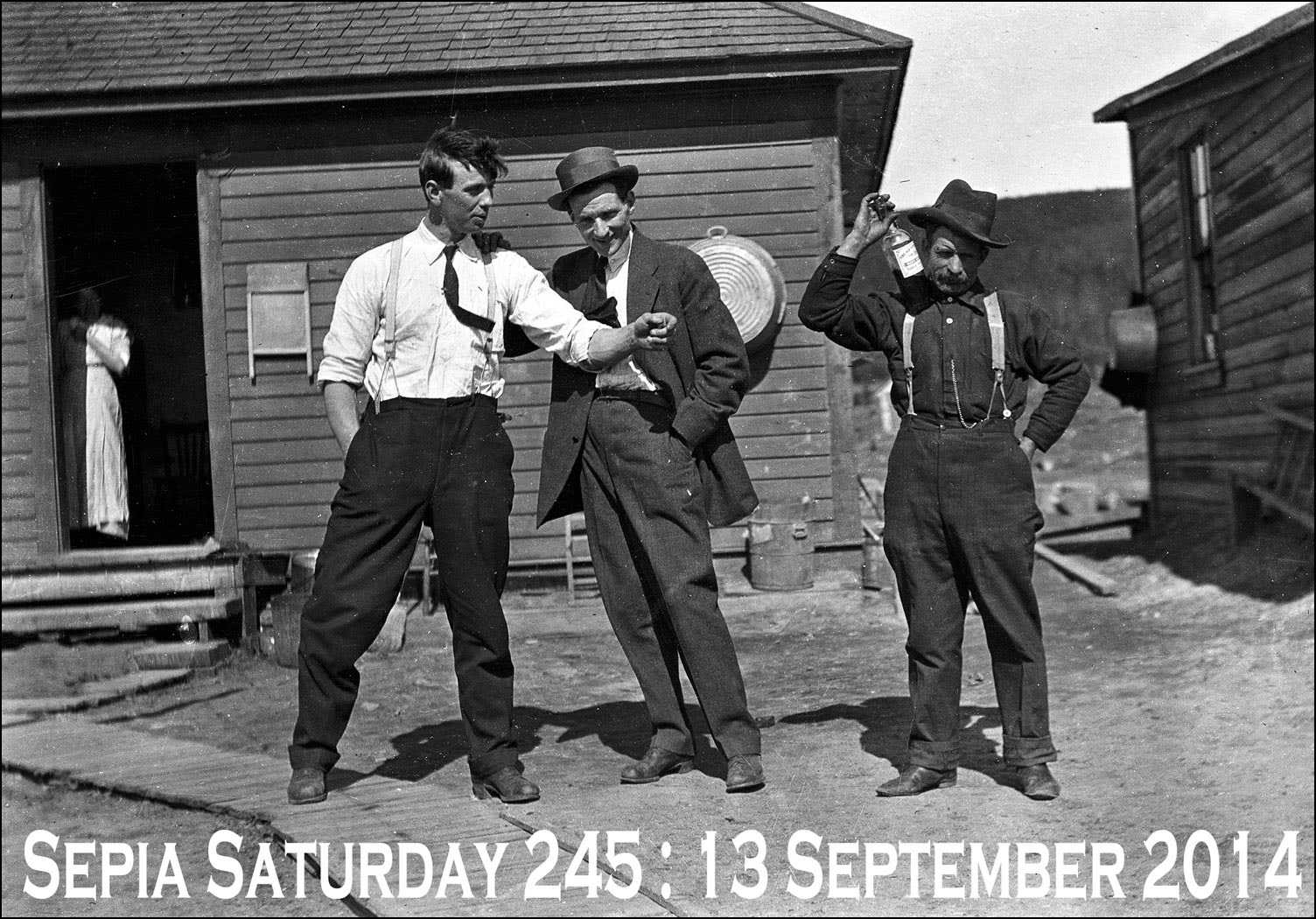 The house where I was born was made of stone but lacked certain facilities.


Beyond the back of the house to the back of the drive were the outhouses with big double doors used as garages for the cars of the next door landlord’s spinster daughters. –
Between the garages and the house were two smaller outhouses - one for Dad’s tools and where the dog had its kennel, and one for coal, the fuel that provided heating and hot water in the house. Behind the coal house was the only toilet. No plumbing or drainage; it was equipped with a big wooden seat, and beneath the hole, an open bucket emptied once a week.
Behind that unmentionable place, down one step to a stone flag floor was the wash house, in which Dad kept his bike and with a bench against one wall at which to work. However in pride of place was the large coal-fired copper in which the weekly washing was boiled up and which provided, at the end of a week, a large tin bath full of water for a proper wash.

Not round and small like that on the outside wall of the prompt. 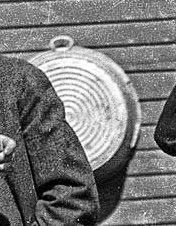 If it was exceptionally cold, as a luxury, I was sometimes allowed to fill the bath in front of the hot black-leaded range in the kitchen. I've no photos to show you other that these of baths in use.


In "The Road from Wigan Pier," George Orwell wrote about miners and the use of pithead baths: -

"It is almost impossible for them to wash all over in their home homes. Every drop of water  has got to be heated up, and in a tiny living room which contains, apart from a kitchen range, a quantity of furniture, a wife, some children and probably a dog, there is simply not room to have a proper bath.Even with a basin one is bound to splash the furniture."


At the time some people believed that miners would not use the pithead baths and some even said that there was no point in given baths to miners as they would only keep coal in them!

However round wash tubs like these have been put to many uses.

It's not only children that get a bath in them.

I'm not sure who Molly is but apparently the dog is called Cosmo - he/she had  run around in the woods and got muddy.

But a much more relaxed dog appeared on a Facebook page this week. My daughter's Golden Retriever would never have submitted to this indignity.

Now I'm off to relax - not in a bath, but under under a shower.
Suggest you take a look at what our prompt has inspired other Sepians to post at Sepia-Saturday-245.
Posted by Bob Scotney at 19:31 14 comments:

Summer (and signs of Autumn)

There have been hordes of butterflies in our garden this year with Peacocks, Red Admirals and Tortoiseshells in abundance. However a smaller species has been around a lot as well.


Those black 'eyes' on its wings seem to be watching you.

I walk by things every day without using my eyes. A garden by the roadside always has a magnificent show of dahlias which I have neglected to photograph until today when some are past their best.

That photo does not do justice to the beauty of individual blooms ( I do not know the names of each variety.)

I have watched corn grow throughout the year but never managed to see it being harvested.

The farmers certainly get on quickly as most of this field has been ploughed and rolled. Today sowing for next year's crop was in progress.

The tractor behind the bush was pulling a roller to break down another ploughed section of the same field.

If farmers are starting on autumn tasks others have a move to warmer climes in mind.

Here's something we tend to take for granted.

We really should look closer as we walk past.

Obviously summer isn't quite over yet.

A search for cultural items and especially jewelry took me to the stamps of four countries although you will see a similarity between two of the items shown.

On 23 August 2011 Great Britain issued a  set of eight stamps about the Crown Jewels. So far I have only the first of these.


The stamp from Germany issued in 1976 has a Celtic connection and shows a neck ring or torc.


This insignia of a Celtic Prince is made of silver and gold, with copper making up the rest around an iron core.

I suppose you would expect a Celtic connection for an Irish stamp.

Finally from the USA a silver and turquoise necklace on a stamp issued on February 8, 2011.

Artist Lou Nolan painted this detail  of the necklace from a photograph. The sand-cast blossom is set with polished blue turquoise nuggets. The necklace itself is believer to have been made somewhere in the 1940s or 1950s.

To view other cultural items/jewelry on stamps just follow the links at Viridian's Sunday-Stamps-186.