Thanks to the Royal Mail's slip-up I have a new 'S' this week.

Sarmi, in the Dutch New Guinea (now Indonesia) was where American troops landed on 17 May 1945.

The Royal Mail issued a preview of stamps for 2019 intended to depict the D-Day landing of Allied troops in France on 6 June 1944. 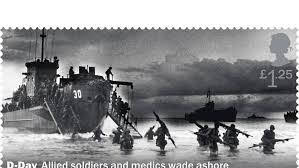 Unfortunately this was the Americans landing at Sarmi!

It was plain sailing for  my other stamps this week. 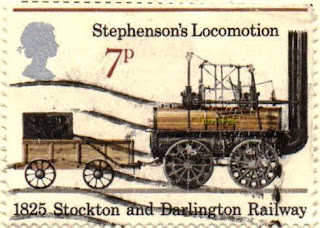 I included all trains in the set when explaining the connection between my local town and the start of the Stockton & Darlington Railway here.

Meanwhile for more 'S' stamps check out the links at Sunday-stamps-s.
Posted by Bob Scotney at 13:11 4 comments:

It has been a disappointing year so far for Christmas stamps. I've only seen two and none from overseas so far. 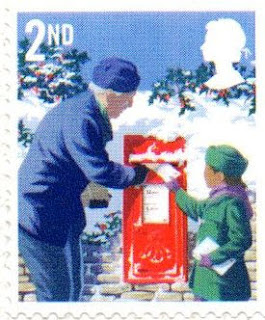 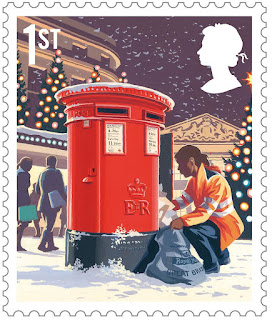 Despite the Royal Mail showing postbox scenes these are the only two that have graced our letter box among last year's stamps and definitive 2nd class.

You have to have the eyes of a hawk to see the Queen's head on these.

From left to right, they depict:


Merry Christmas greetings to all who read my blog and especially to those who participate in Sunday Stamps where if you visit The Sunday Stamps Christmas you will find other stamps to admire.
Posted by Bob Scotney at 09:51 5 comments:


Finally it has registered with me that we have reached the letter 'R' so perhaps this stamp is an apt reminder.

Charles Marion Russell (1864-1926) was an American Artist of the Old American West. Among his many paintings was one called 'Jerked Down' - see for yourself what this meant.
For 'R' related stamps check out Sunday-stamps-r.

I've posted stamps of Pulitzer Prize winners before (Margaret Mitchell, Theodore Roethke) but when I saw this stamp I wondered what Joseph Pulitzer would make of the Press and social media today.
I was forced to check out more about the man at Pulitzer biography. Well worth reading.

When it comes to words beginning with 'P', phthisiologist was new to me.
Phthisiology covers the care and treatment of tuberculosis in the lung and is a special area of pulmonology. The Greek for phthisis designated by Hippocrates means "consumption".

Edward Trudeau, the man on the stamps, established the first laboratory in the US for the study of TB.

A legend of a different kind is the man who starred as Atticus Finch.
To Kill a Mockingbird won a Pulitzer Prize for Harper Lee in 1961.

The third time round in an A-Z 'Q' was bound to be a problem were it not for the longest serving monarch in British History celebrated by Australia in 2015.


Another Commonwealth country commemorated its 100th anniversary in 1967 also with the Queen.

For other 'Q' related posts please check out the links at Sunday-stamps-q.


As 'Guardian of the Pioneer' in Nebraska Fort Kearney was. in the blurb on the US Stamp Gallery,  an important post protecting settlers from Indian raiders.

27 April 1949 saw the issue of a stamp for the first gubernatorial election in Puerto Rico.

It depicts a Puerto Rican farmer, a cogwheel and a ballot box. Puerto Rico had been ceded to the US in 1898 as a result of the Spanish-American war.

A man who distinguished himself in that Spanish-American war was

The stamp was issued  on 17 November 1961. Pershing was America's WWI most celebrated hero having commanded the American Expeditionary Forces in 1917.

There is a bonus 'P' with that Portland Oregon postmark.