Bird of the Week

I may not be able to maintain this theme as the A-Z Challenge starts tomorrow and will occupy most of my time next month.

This is my bird this week, although the photos are much older -


And from Scotland a photo taken by the husband of one of my wife's friends.

I struggle every year with this theme - I've shown flowers, rabbits and cathedrals before. This time I have chosen stamps containing chapels and churches from Scandinavia and Europe.

The original church was built in 1490/1510. It was initially a Catholic church but converted to Lutheran in the mid 1500s. It's also known as the church of St Catherine of Alexandria.

Le Corbousier was the architect of the chapel on my next stamp from 1965.

The building was finished in 1954 and has appeared on a number of stamps of different denominations.

My third stamp shows the national shrine of Bavaria dedicated to the Virgin Mary.

Special - Bird of the Week

I have only ever seen this bird once in our garden, but I have now managed to get a couple of shots of one on a nearby cottage roof.

Its characteristic tail action and its black bib made it stand out.

I've been taking some photos today that are connected with my theme this year.

This one looks rather lonely, but you would hardly call it shrinking.

I pass them every day but rarely look at them. Well this year will be different - even if many of them may fall under the letter 'X' for unknown.

This is my sixth year entering the challenge. I look forward to meeting old friends and making new contacts - one of the joys of taking part.
Posted by Bob Scotney at 15:02 11 comments:

I have a sheet of stamps that were issued in celebration of Earth Day 2011 which is particularly appropriate for this week's theme.


As you can see each stamp contains an eco-tip on simple things we can do each day. I wonder how many of the 16 tips you practise.

Norway has been a member of the Eureka organisation for European Technological Research since it started in 1985. This stamp issued 6 June 1994 is definitely green. However it's very difficult to make out the wording at the bottom of the stamp


With it having been St Patrick's Day this week I was disappointed that that I could not find a green stamp from Ireland to show.

This is an entry for Sunday-Stamps-II-66. where other green issues are to be found by following the links.
Posted by Bob Scotney at 08:56 7 comments:

Bird of the Week

I saw two birds apparently admiring themselves in a window one day this week.

I've since learnt that the old lady who lives there has a bird feeder that they visit. Perhaps they were trying to tell her it was empty.

The chaffinch is one of our prettier birds, especially the more colourful male.

I have chosen to go for organisations associated with health and welfare this week.

The Physicians of America were commemorated by this stamp in 1947.

This is from a painting by Samuel Luke Fildes, an English painter and illustrator, which hangs in the Tate Gallery. Sir Henry Tate commissioned the work which was painted in 1890.

The 'blurb' for the stamp on the US Stamp Gallery website heads it 'The Doctor, Sir John Fildes' for some reason or another. Apparently it depicts that doctors were no better off then than they had been for centuries, They could only sit and watch as the child depicted died of diphtheria.


The Red Cross is an organisation know world  wide.  On 7 September 1948 the USA issued a commemorative stamp.

The Salvation Army is well know in the UK. A set of two stamps commemorating its centenary was issued  on 9 May 1965. (I have only one of the set)

I've written about Joseph Lister before (Lister) on Sunday Stamps but now have both stamps from the set commemorating the centenary of antiseptic surgery. 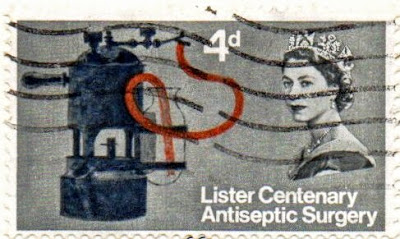 Bird of the week

There are a number of fields near where we live that are so waterlogged that they are a favourite place for ducks like these today.

Although you can quite clearly see the female on the ground I didn't realise she was there until I saved the photos to my computer.

Just out of shot were two more drakes. Pictures taken from 30 yards away.
Posted by Bob Scotney at 12:34 3 comments:

Over the years I have tried many moonshots - not always with success. 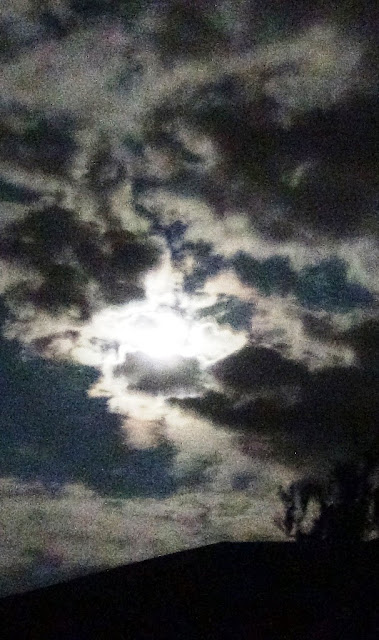 However once night descends it may be too dark to cut the Michigan grass. 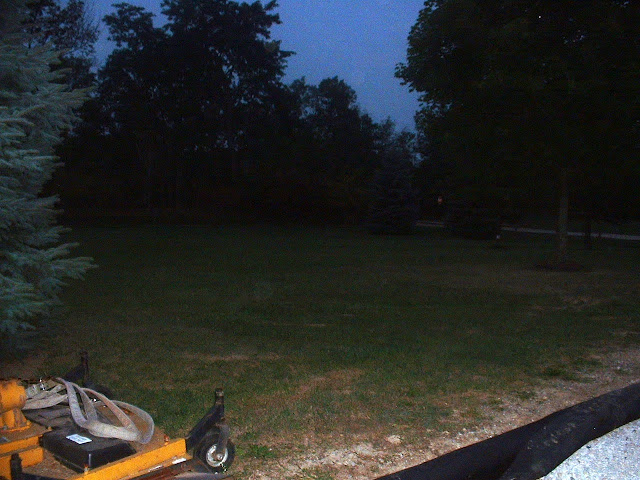 I hope you can find your way across to see more shots at Carmi's Thematic-photographic-368. before you say goodnight.
Posted by Bob Scotney at 13:48 7 comments:

I'm surprised how few women appear on stamps. Of course no-one can beat Queen Victoria's record of being first; our current Queen must hold the record for appearing most.

But do you know who was the first woman to appear on stamps from the USA?

The old album I mentioned last week had two blocks of four stamps depicting a woman who had been the leading actress in Norwegian theatre for half-a-century.

The other block is the 40 ore denomination, the same design in blue - issued 2 August 1967 on the 100th anniversary of her birth.

In 1963 Carole Joan Crawford had reason to pleased with herself and on 14 February 1964 she appeared on her country's stamps.

I have two of the First Lady stamps I mentioned.

That damaged stamp is from the 'Celebrate the Century' series.

But the USA stamp I'd really like to find is that of a Queen who was the first woman on their stamps.

Queen Isabella of Spain appeared in 1893 to commemorate the 400th anniversary of Columbus's discovery of the New World.

To celebrate other women today just visit the links at Sunday-Stamps-II-64.

Regular visitors to my blog will know that I am fond of dogs, but rarely mention cats.

I have always had to stop and 'chat' with one in the village that was known to everyone, including their dogs.

From her we always got a friendly greeting; she would leave her sunbathing spot to sit on the low wall alongside the footpath. She would not let you ignore her.

This morning I was told she has passed away, aged 17.

Her conscious tail her joy declared
The fair round face, the showy beard,
The velvet of her paws,
Her coat, that with the tortoise vies,
Her ears of jet and emerald eyes,
She saw and purred applause.
( Thomas Grey)

He last meow fades away.
Posted by Bob Scotney at 13:49 4 comments:

I've reached an age when studying lots of data is boring. So I rarely look at equity prices in the newspaper and never online. Not even -

That's London, England, Carmi not Ontario. And anyway there's probably an app for data such as this.

However even with leisure activities it's impossible it seems for some people not to record data of what they do.

I've played a lot of golf over the years and can tell you how many courses I have played at;  I even at one time recorded my scores - hole by hole for every game. I won't bore you with data like that.

All before they've hit a ball.

I just wonder how Harry Potter kept the Quidditch score when he played behind these walls.

Perhaps he stored his data in the clouds.

Like us these days he has plenty to chose from.

If you haven't had enough, you may explore more data at Thematic-photographic-367.