This is the nearest I will get to stamps this weekend as I cannot match the lighthouse theme on Sunday Stamps II.

Fortunately it was outside - 5ft from the ground.

From a different angle it still looks the same.

If it's trying to get into space


I had to let in into the secret that it would never reach the escape velocity required to take it into space.

The only lift-off it achieved was when I plucked it off the window and deposited in a garden refuse bag. It should take it a month to eat its way out of there.

I've made my views on shopping on here before, it's a way away from being a favourite activity of mine.

A long distance view is best

This is the garage shop at which I buy my daily newspaper.

However if they have sold out by the time I get there I just have to cross another road to reach the newsagent which stocks other goodies.

Sometimes in desperation I have to visit the supermarket round the corner - the one whose sign appeared in that first distance shot.

How can anyone stay that long.

In actual fact that notice resulted from people parking there all day when the rail station car park is full, or to avoid parking charges in the town centre.

Sometimes however I have to load gardening products in the boot of my wife's car.

They never have compost when we want some it seems.

These days I prefer to shop -

I'm sure you will find more exciting shopping experiences by following others at Thematic-photographic-370.
Posted by Bob Scotney at 18:31 4 comments:

It took me some time to identify the butterflies, and possibly one moth, on a set of stamps I acquired recently for this theme. There are 6 in the set , but I have only 5 of them all issued on 23 May 1966.


I recognised this as a swallowtail immediately. The Czech name is at the bottom of the stamp and its Latin name down the right hand side. Apparently it is known as the Scarce Swallowtail.

Despite what may seem a strange appearance photos on the internet clearly show differences on the wing, with the purple colouration covering part or all of one wing.

Photos of the next insect at rest made me think it is a moth. 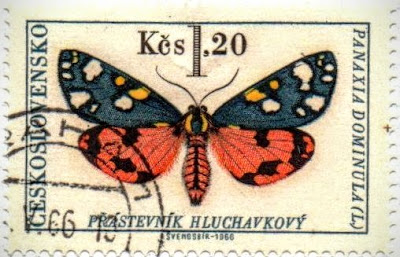 I hadn't found a common name for the Panaxia Dominula until a few moments ago. Apparently it is a Scarlet Tiger Moth.

For more beautiful butterflies on stamps visit Sunday-Stamps-II-75. and follow the links.
Posted by Bob Scotney at 09:39 8 comments:

Bird of the week

In Cornwall recently after having stopped for a coffee in Padstow at 'Down By The Ferry' amidst all the noise this fellow (?)  just below the top of the quay wall -


ignored everyone passing by.

Email ThisBlogThis!Share to TwitterShare to FacebookShare to Pinterest
Labels: bird, Cornwall, Down By The Ferry, gull, Padstow

Three countries this week, all a long way from the UK although I recognise some of the flowers.

The manuka or the tea tree is a plant in the myrtle family.

A flower from Vietnam is more familiar to me, by name at least..


So far I have been unable to find its date of issue.

In the USA the XIth International Botanical Congress was commemorated on 23 August 1969 with this set of four.

To see other flowers selected this week just follow the links at Sunday-Stamps-II-74.

Something nasty in the woodshed

In the midst of gardening it's not the time to discover 'something nasty in the woodshed" - well in a wooden shed at least.


It wasn't that tidy today when what looked like concentric eggshells were discovered hanging from the roof.

What came first? The chicken or the egg?

The occupant took exception to a close up and was not at all like a chicken.


The wasp threatened to turn nasty as it buzzed around my head.

Wasps can built nests like this as large as footballs and be inhabited by hundreds of the things.

Regretfully it was I who had to metamorphose into something nasty in the wooden shed and dispose of the nest - wasps need planning permission to build in a place like this.

A wander round the world with maps from different countries in date issue order.

To the Caribbean for a Federation that survived a mere four years.

Down south to Brazil

And across the oceans to Bangladesh


For maps of other places check out Sunday-Stamps-II-73. and follow the links.
Posted by Bob Scotney at 08:48 5 comments:

By hook or by crook - Sepia Saturday

They tell me shepherds once used a crook in their work I wonder how many shepherds there were about when the megaliths were put up at Almendres Cromlech in Portugal.


Apparently the crook was a common motif on the local megaliths.

A shepherd in Croatia needed a dog and a crook to keep his flock under control in the snow near Jagodnjak.


The Hungarian village of Ricse commemorated its shepherd in a statute but he just carried a stout staff and apparently had no dog.

In the early 1950s I had close encounters with sheep - well, with their fleeces at least. As a school holiday job with the Stamford firm of Central Wool Growers, initially at their Wothorpe plant and later in the new premises on Uffington Road.

Fleeces delivered from farms were examined and graded for quality by a Yorkshire man named Ben Waterhouse. He threw them into bins according to their breeds. Our gang of school boys then had to put them into bales and stamp them down with our feet.

Back then, my hands were the softest they have ever been due the effect of the lanolin in the wool.

A less pleasant job however was the baling of dags - the wool clippings from around a sheep's back end. My trouser legs had a very interesting smell - lanolin, and a ranker aroma which would keep any dogs away.

Now the nearest I get to sheep and lambs are those in a local field.

Seems a shame that soon it will be time for mint sauce.

Perhaps their mum will provide some protection -

before it's time for lamb chops.

Don't feel sheepish, please visit Sepia-Saturday-329. for alternative views - any black sheep out there I wonder?

I don't often photograph a fence just because it's there but on a trip to Cornwall last month there were some I could not resist and others just happened to be there.


The building on the horizon to the right of the fence is the Headland Hotel at Newquay just up from the famous Fistral surfing beach. The fence is there to stop people falling over the cliffs into the sea (Atlantic).

There is more where the Headland ends.

We went for Sunday lunch at a hotel further up the north coast of Cornwall.

The rope fence to the car park was all there was to prevent a fall down onto the beach.

On a walk between St Mawgan and Mawgan Porth the shots I took had fences in then too, but these weren't really meant to all that important as -


This is a post for Good Fences of course.

Carmi wants us all to feel nostalgic this week so I have dug out some shots of the village where I was born. The pictures are of the house on the High Street in the Rutland village of Ketton, where we lived until the 1950s. The photos were taken in 2009.


In the late 1940s there was a wooden fence and double gate and no stone wall. The small box hedges did not exist, and a single gate and path led to the front door.

A separate building existed where the stone wall on the left is now.

The main road from Stamford to Leicester ran by the front of the house with a single white line down the middle - not the hatched arrangement shown above.

The bollards in the next photo were not there either.

Why should I get nostalgic about a stretch of road like this?

Well it was 'our' football pitch which ran from the telegraph pole on the left to just beyond the car in the distance - no one had cars then!

The Blue Bell Inn pub was located on the right hand side of the road. My pal Harry's father ran the pub and used to take him to watch Leicester City play.

In those days, the Premier League did not exist and Leicester played in Division 2.

Jack Lee and George Dewis were two well known players (to Harry at least). This mean he had first choice and was always Jack Lee, leaving me to be George Dewis.

This combination dates our games as Dewis left after the 1946/47 season, when I would have been 10.

And in case you did not know Leicester City, 5000-1 outsiders, won the Premier League title yesterday, just over two weeks before I reach 79.

Now we live near Middlesbrough and have to wait a little while longer to see if they gain automatic promotion to the Premier League - one more match to play, which they need to draw or win against Brighton on Saturday. Come on Boro!

For other nostalgic feelings check the links at Thematic-Photographic-369.
Posted by Bob Scotney at 19:14 10 comments:

On 21 July 1969 Poland commemorated the 25 anniversary of the establishment of the Polish Peoples Republic with a set of stamps showing people at work. 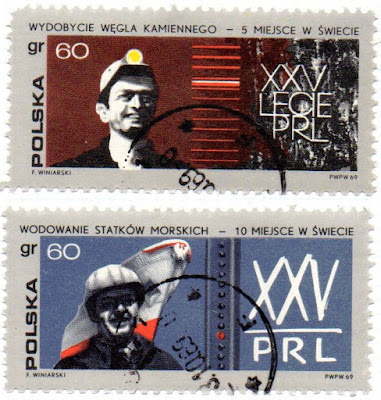 The industries represented are (from the top)
To see other workers or a May Day theme check the links at Sunday-Stamps-ii-72.