The merchant William Caxton was the first person to introduce the printing press to England which he did in 1476.

I don't ever remember receiving stamps like these or whether similar ones exist today.

Some organisations are well known by their initials such as the Trade Union Congress.

I started off on the theme of love with Caxton so I'll end with the same thought in mind on greetings stamps from 2002 (I think).

The Hello stamp is made by an aircraft sky-writing so perhaps it's from a photograph and therefore ineligible for this words and numbers theme.

You will find other words and numbers by following the links at Sunday-Stamps-II-50.

Carmi's plug struck a chord or two with me.

One for the lights and one for the extractor fan in our shower room.

Meanwhile in our bathroom the bathroom cabinet lit up with this image.

However the photo of the day for me was this cheerful chap.

It was only as I saved the shot that I realised that I had also caught an electric street light and a blurred solar panel on a roof, just right for this electricity theme.

A number of people in our street have invested in solar panels to generate electricity for themselves - and here's a good example.

Of course these days other generation schemes are available such as these:

If you study that photo you can see a line of electricity pylons which are much larger when you get up close.

Some houses in our village are still hooked up to more primitive power lines.

No underground cables for them!

There is a nuclear power station at Hartlepool just a few miles from us but unfortunately I have no shots of that.

To get there by road I can always check road condition by referring to the screen at our local petrol station.

For more bright sparks you need to switch over to the live links at Thematic-Photographic-356.
Posted by Bob Scotney at 18:54 5 comments:

For the International Year of the Child in 1979 Great Britain issued a set of four stamps on 11 July.

These three are based on:
The fourth in the set shows Alice's Adventures in Wonderland (Lewis Carroll).

A second class stamp from the Animal Tales series (8 stamps) in 2006 had another of Beatrix Potter stories.

Although I have the More About Paddington (Michael Bond) stamp I have not seen the others. Posted here.

Looking back I find that I showed a FDC of full set of stamps including Alice from the 1979 International Year of the child
last year here.

For more children's stories check out the links at Sunday-stamps-ii-49
Posted by Bob Scotney at 10:44 9 comments:

For this week's theme I thought I would show some 'old' photographs from the 1950s.

They have a sporting theme until you get to the present day!

Those in the blazers have won their cricket colours. That's me second from the left.

And how better a way to relax than with a companion like this.

Over 60 years later the blazer is still around.

And that's because I'm old as well  - and can no longer get it on.

For other old interpretations check out the links at Carmi's Thematic-Photographic-355.

In view of the tragic events in Paris I tried to find a French connection.

All I could find was two Frenchmen who shared the Nobel Prize for Chemistry in 1912.


Victor Grignard and Paul Sabatier shared the 2012 Nobel Prize for Chemistry for different work that greatly advanced the progress of organic chemistry.

In 1917 Karl Adolph Gjellerup and Henrik Pontoppidan from Denmark shared the Literature Prize, Gjellerup for his poetry and Pontoppidan for his descriptions of everyday life in Denmark.

One of the Founding Fathers of the United States was commemorated in 2006 on a set of stamps which show his versatility.

To me he will always be the man who invented the lightning conductor (rod).

For other famous people you should cross over to Sunday-Stamps-II-48.
Posted by Bob Scotney at 10:02 6 comments:

Down on the ground - Thematic Photographic


Sometimes you don't have to look far for a subject, it's just there on the ground.

You have not even have to be down yourself. It's amazing what you can catch just by bending and using a screen that swivels to let you see just what is there. 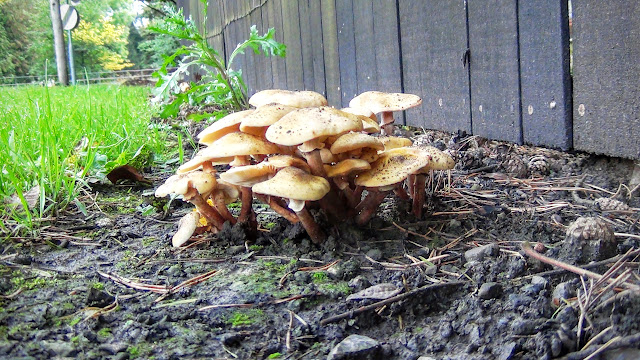 To get the lowdown on what others found down on the ground just visit Carmi at Thematic-Photographic-354.

Finding stamps to meet the 'monochromatic' theme had me puzzled and eventually sidetracked into research.

Google led me to images of monochromatic stamps that appeared to be anything else but one colour. However one stamp in my collection was included.

By now I was more interested in the stamp than whether it is truly monochromatic.

The Cherokee Strip was an 8 million acre parcel of land in NW Oklahoma. When members of the Cherokee tribe were moved by the federal government from the southeastern United States to Indian Territory (in eastern Oklahoma) in the 1830s they were given an outlet to the western hunting grounds - this became known as the Cherokee Strip.

On 16 September 1893 the Cherokee Strip was opened by presidential order for a great land run, billed by the New York Times as the greatest real estate deal of the century

The stamp was issued for the 75th anniversary of the historic land run by more than 100,000 prospective homesteaders in the northern portion of Oklahoma. They were competing for 40.000 available home sites.


Still hunting for monochromatic stamps I found this stamp at my local market stall.

At the time I did not realise that the stamp and the four others with it had black borders because of the black card holder that contained them.

Astrid was a Swedish princess who in 1926 married Belgium's Crown Prince Leopold. He became King with Astrid as his Queen Consort in 1934.

On August 29th, 1835 the royal couple had a car accident in the Swiss Alps - Astrid was killed.

Semi-postal stamps are also known as charity stamps and raise money for a particular cause.

This are the five stamps that I found.

The surtax may be seen on each stamp at the top right. Proceeds were divided between several charitable organisations.

Even if you do not agree that my stamps are monochromatic I hope you can see why I have shared them this week under that theme on Sunday-Stamps-II- 47.
Posted by Bob Scotney at 09:19 4 comments:

The small farm in the village where I was born was noted for its ...


and its early morning calls.

This stamp is one of a set of eight from Poland showing:


The three stamps that I do not have depicted geese, pigs and sheep.

On the same day that I found them I also acquired a first day of issue of British Cattle - magnificent beasts.

The stamps are on what appears to be a card (nothing on the back). I wish it had been intact in view of the cow's horn at the bottom left.

The beast are:
I had not heard of the Irish breed before. The name Moiled is derived from the Gaelic "Maol" and refers to the fact that they have no horns.

I continue to learn from participating in Violet's Sunday-Stamps-II - No. 46, this week.