I looked for something depicting winter storms but came up with a blank. I thought I was going to forced to show something from Winter Olympics like this one from Cortina, Italy.

To find non-sporting winter scenes I finished up in Scandinavia.

I wouldn't have looked at that one twice if it hadn't been for the sledge, nor this one until I realised it depicted footsteps in the snow.

The Swedish cartoonist Oskar Andersson was born in 1877 and was well known for his signature OA which you can see on the stamp. Tragically he committed suicide in 1906.

I'd prefer to be at the head of this line - going down to where it's warm.

That's my wintry tour for today, you may follow others at Sunday-Stamps-II-59.

Washington's Jonas has reached the UK and has now been named Storm Gertrude. The strong winds and rain make it an unsuitable day for outdoor photography or for wearing sunglasses.

However I found a model prepared to show off a pair with engraved lenses. 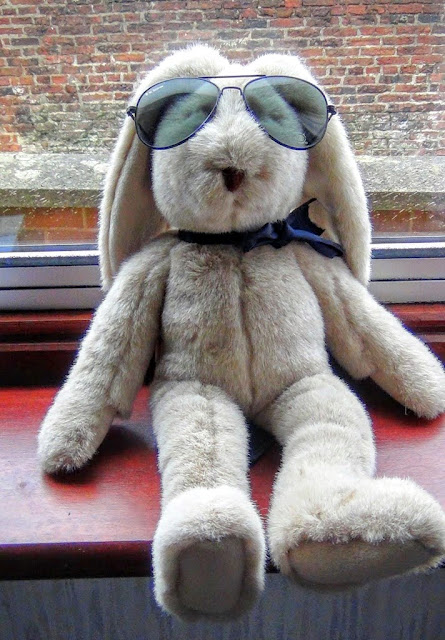 This pair were a 'freebie' from a golf tournament in Norway in the 1980s.

The 'engraved' lens shows who they were given to.

The other lens had an engraved logo for the annual Oilmen's Tournament at Stavanger Golf Club.

A search for other lenses produced these old pairs - oh why haven't they been thrown away.

They could not possibly have been mine.

As I have got older and taken other hobbies up again, my eyesight isn't as good as it used to be.

I have to resort to the use of:

But if I'm honest they are not:

Perhaps I should have been aware of the lens that magnified this.

Honest I wasn't trying to take a selfie with this.

Mind you it's lens is a thing to be admired.

She used to wear spectacles for many years as this earlier photo shows.

I wonder if that was the pair with which my ear was once entangled in a Lincolnshire cinema.

I just hope that Carmi realises what trouble his Thematic-photographic-365-lens has now got me into.

I can hardly say my lenses were steamed up and I didn't see it coming.
Posted by Bob Scotney at 19:12 6 comments:

As I couldn't find tricycles or any motorbikes I had to settle for bicycles.

I've always regarded cycling as a form of savage amusement as I learnt to ride on a fixed wheel bike and pedalled backwards too often by accident, with often spectacular results - for any spectators, that is.

By the time of the 1970  Commonwealth Games in Edinburgh I had given up and just admired this stamp, issued on 15 July, showing cyclists in action.

The road past our house is a favourite route for leisure cyclists, mainly men in Lycra who image they are Bradley Wiggins. Cycling club members may also be seen from time to time.

It was 1978 that saw the centenaries of the Cyclists Touring Club and the British Cycling Federation commemorated on stamps. 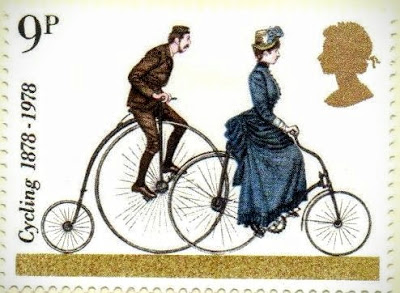 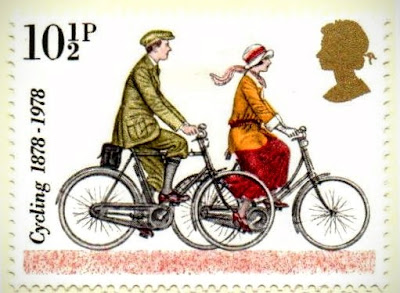 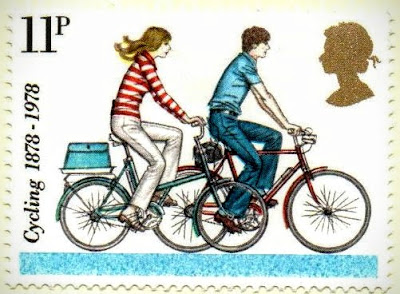 Sir Bradley Wiggins currently holds the record, once held by Eddy Merckx, for the furthest distance cycled in one hour . Merckx set his record in Mexico City back in 1972.

It's appropriate then that I should show a stamp issued in 1975 promoting the Mexican export of bicycles.

I hope that when you have cycled over to Sunday-Stamps-II-58. you will find the links to some motor bikes and cycles from other countries.

I was surprised to find how often tyres appear in my photographic archive although not in a tired theme.

I'm old enough to have ridden a bike before pneumatic tyres were common place but I'll leave it to my daughter to demonstrate the hard variety on her bike. 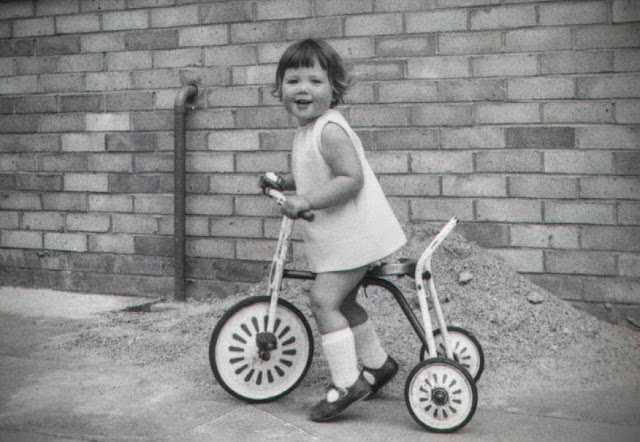 There are occasions when tyres may bring a rider to a hard conclusion.


New tyres on a new car are things to be admired as well.

But large tyres like this have to pass the smell test.

Some need to be a help in agriculture.

When it's too cold to work tyres may even take a rest.

In some cases you only know where they have been by -

I'm pleased to say that when their working life is over, tyres may still provide fun for some.

If you are not too tired by now I suggest you swing over to see more at Thematic-photographic-364. while I ignore the red lines under tyres put there by the automatic spell check.

Having used my British stamps before I had to look for something else this week.

'Cor, love a duck' is an old saying and it was American ducks that I found first.


This stamp to commemorate waterfowl conversation was issued on 24 October 1968. This colourful bird is known as a 'perching' duck since it rests on, and nests in holes in, trees.

I chose two stamps from Norway because I could see the birds they showed had webbed feet.

Alle Alle is the little auk. 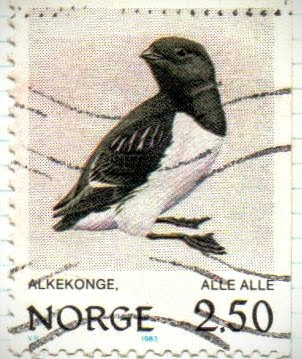 Recently many of these birds have been blown across the North Sea by gales and unfortunately many have perished in Scotland as a result.

As far as I can see the bird on my next stamp does not have webbed feet.


With a name like purple swamphen it just has to be a water bird.

To see other birds you need to fly over to, and get your feet wet at Sunday-Stamps-ii-57.
Posted by Bob Scotney at 09:30 12 comments:

The rain has stopped at last and cold weather has arrived, it's not the climate for stripping off.

However some shrubs even look good when denuded.


At this time of year before next year's crop gets established a field may be bare but it's far from barren.

However appearances may be deceptive like this footpath in the winter sun.

Even bare boards boast a little decoration in a garden fence. 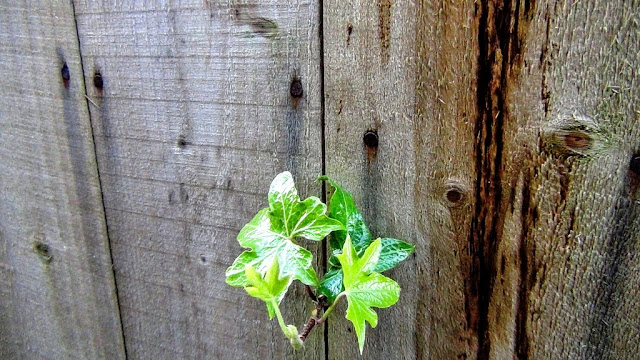 Perhaps this sunbather should have invested in a fig leaf rather larger than the ivy intruding through the boards. 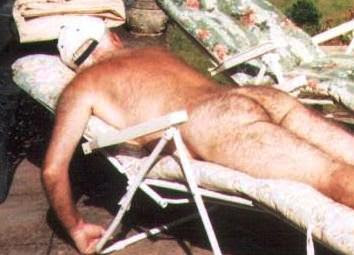 That brings me to the bare end.

For other interpretations of Carmi's bare theme please check the links at Thematic-photographic-363.
Posted by Bob Scotney at 18:40 8 comments:

As my first stamp will show,I've learnt not to make assumptions this week.

I thought this was an impressive castle until I discovered it wasn't a castle at all.

The Skifa Kahla is the ancient gate to the coastal city of Mahdia, the old part of which corresponds to the Roman city of Aphrodisium.

My next stamp is of a place where international conferences are held.


In 1999 the Chateau of Rambouillet hosted the NATO peace conference on Kosovo. The rejection of the proposal by the Federal Republic of Yugoslavia lead to the war in Kosovo.

The Greek island of Rhodes is the site of the palace on my last stamp this week.

This castle also called Kastello was once the Palace of the Grand Master of the Knights of Rhodes.

The 7th century Byzantine citadel was converted by the Knights Hospitaller into their administrative centre and the palace of their Grand Master.

The Ottoman Empire used it as a command centre and fortress. Under Italian rule it became a holiday residence for the King of Italy and for Benito Mussolini, the Fascist dictator. Under the 1947 Peace Treaty with Italy, Rhodes and the Dodecanes islands were transferred to Greece.

Palace of the Grand Master sounds a more impressive title.

To see what other castles and palaces have been found on stamps please follow the links at Violet;s Sunday-Stamps-II-56.

And still it rains! After the wettest December since records began 1910, it's enough to make anyone feel blue.

I didn't really know where to start especially as 19 of my earlier thematic posts have included things blue before.

Of course the answer was right in front of me -


Christmas may be over and our decorations put away but others have still to get around to dismantling their display.

A local notice stands out as a reminder not to encroach. 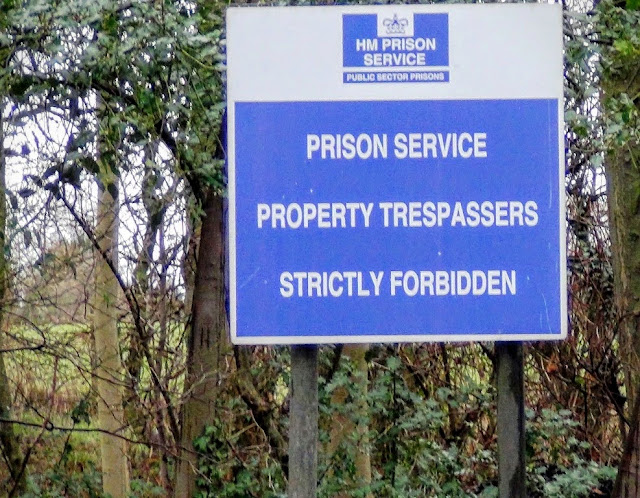 Having selected a bridge as my favourite choice last week I had to search my collection for something different this week.

From Iceland I found the Skeioara River Bridge, a stamp posted in 1978.

At 900 metres the bridge was the longest in Iceland.

Two stamps from Sweden left me wanting to know more.

This shows one of the bridges to Tjörn Island. I am still trying to find out whether this was the one destroyed by an out of control ship in 1980.

My second stamp from Sweden shows an aqueduct carrying ships along part of the Daislands Canal.

I believe the bridge in the back ground is a railway bridge.

I've also found this video which is worth including.


Thanks to Paul Christiansen for the video and the following information. The aqueduct was planned in 1863 but due to lack of ideas, it wasn't finished until 1868. It was made in Stockholm and transported to site, where it was put together with 30000 rivets. It is 32.5m long, 4.05m wide and 1.8m deep. The whole system has 4 sluice gates, operated manually.

You can see that Sunday Stamps gets me to all sorts of unexpected places just from researching the background to the stamps I show.

To see other bridges check out the links at Sunday-Stamps-ii-55.