For birds this week I decided to start with some game birds from Europe.

The Ring-necked Pheasant occurs in many countries, including -

I just wonder whether a bird of prey used for sport would take one of those.
Finally two birds from South Africa.

The Bokmakierie (Maiaconotus zeylonus) is a large yellow bushshrike. As you may be able to tell from its beak the Bateleur (Tetrathorpius ecaudatus) is an eagle.

For other birds selected this week please visit Viridian's Sunday-stamps-198.

I was surprised by just how many of my photos could be interpreted as meeting the 'Columns and Rows' theme Carmi has set us this week.

For quiet contemplation where better to start than in the ruins of an abbey.

The four screws lift columns of water up the white water rafting course adjacent to the River Tees at Stockton.

There are other ways to get a lift.

In Cornwall's city it's peaceful to admire the-

Where you sit in rows and contemplate the columns of -

If I have recycled some pictures from recent years this week a calendar for the future arrived.

A magnet holds it to the side of the filing cabinet in my office.

Behind me a bookcase is made up of rows of books, the columns are the books themselves.

"Your face, my thane, is a book where men may read strange matters."  - Macbeth

For more strange matters link up with Carmi and others at Thematic-Photographic-318.

This is my first attempt to join this meme hosted by Ashley Sisk on which we are challenged to take five new photos each week to a theme set by her.

So here goes - the lights say I may proceed.

A school run under way.

The War Memorial and Yarm's Town Hall are the place for -

Litter picking kept me occupied one day this week with a Charity sack to fill.

I may catch a bus in Yarm if I have the time.
To see how other participants fared with the five part challenge be sure to follow the links at Ashley's Scavenger-Hunt-Sunday-226.

Furniture has proved to be a most difficult theme for me. There is furniture on the stamps I've chosen but it's not the focus of attention.


He was the first effective king of all Norway and the country's patron saint.

I know nothing about my second stamp, but it does contain a chair.

My third stamp has two chairs and a cloth covered table on a 75th anniversary commemorative.

As I've 'cheated' I look forward to following the links at Viridian's Sunday-Stamps-197. to see some real furniture.

The Power of Three - Sepia Saturday

I was one of three brothers, my wife one of three sisters but I am unable to find a photo showing us together in our family groups. That's why this week's silhouette post left me in a quandary. 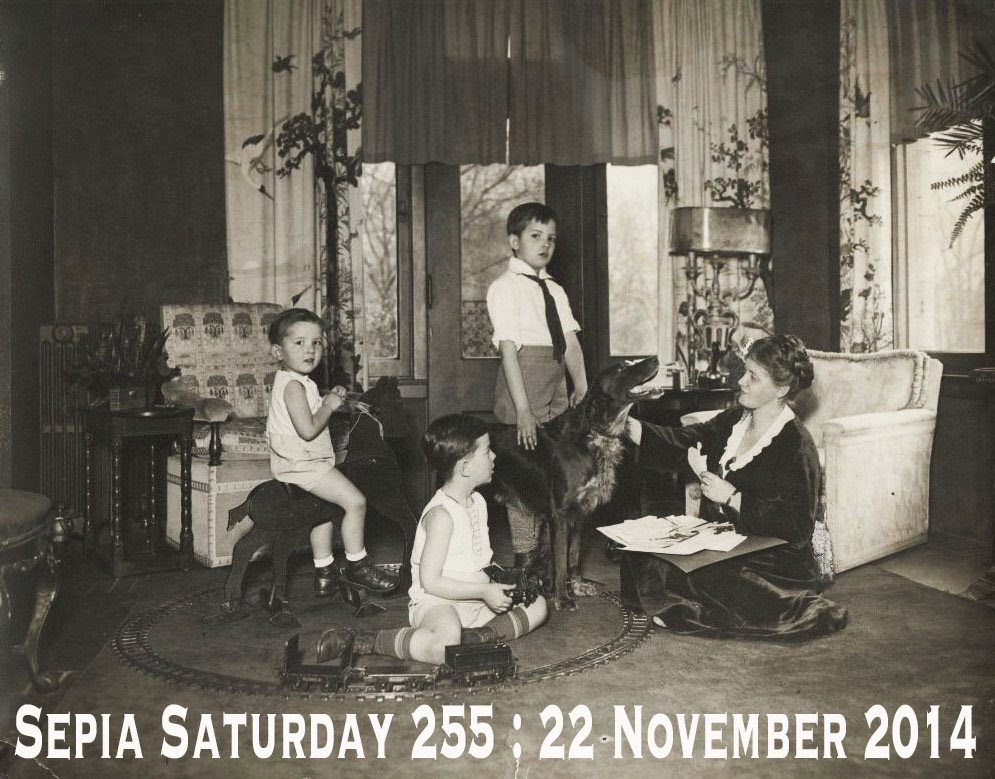 Those who visit my blog will not be in the least surprised if I used the dog as a theme.

But with three children of our own it would be remiss of me if I left them out. However over the years there have been few occasions when they have been photographed together.


That was taken at one of the many abbey ruins in Yorkshire, if only I could remember which one.

Shortly afterwards a visit to Sandsend near Whitby has them leaving the sea with you know who in charge.

When they were older still (1980s) we find the three of them at home in Yarm. 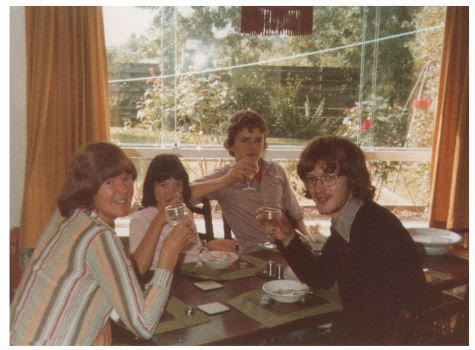 Of course they scattered far and wide after leaving school and university. When they reunited in Tresco in 2008, they told us that it had been 10 years since they had been together last.

We were all there, thanks to them, to celebrate our golden wedding.

By this time the boys had children of their own.

In a less formal setting they appear to be having fun with their father and grandmother giving a helping hand.

Adrian's youngest son, Angus, is now sixteen but was smaller here in another group of three.

My daughter has no children but has had dogs aplenty, including this gang of four.

I included these because three of them match our prompt with their noses in the air. Cody on the right, and Gem in the front have crossed the Rainbow Bridge. Gem went to join Cody while we were in Michigan 4 weeks ago.

The current three residing there are -

Scout is only too pleased to show you he can raise his nose.

Lily can crane her neck really high - unfortunately I don't have a picture of her in action.

The three of them have the power to make you throw tennis balls for hours for them to fetch. If only I had the power to keep up with them and to make them sit and wait patiently like these dogs from Kirklevington.

And that's not me with the stick.

To see what others have posted this week, check out the links at Sepia-Saturday-255.

Every year when we visit Michigan I manage to photograph some wildlife. this year was different however. There were lots of Blue Jays about but the only bird I caught on camera was a -


This was one of the exhibits on show at the Cranbrook Science Museum in Bloomfield Hills. Other beasts that caught my eye were a -

But the largest of all was the skeleton of -

The most fascinating exhibits to me were not the dead/extinct animals but the section on rocks and minerals. These brought back memories of geology expeditions and lectures at university.

Before we left I had to dispose of an old dog bed. Hidden beneath it were two accumulations of wild life.

This find had me searching for the collective name for ladybirds.

What could be better than "Loveliness."

I hope they find somewhere to survive the cold snap.

Unfortunately there are times when you just get -

The driver was too embarrassed to be photographed being towed out.

Now it's out and over to the vehicular links at Carmi's Thematic-Photographic-317.

When I stay at my daughter's home I always have a field guide, "Birds of Michigan" with me.

This time, while we were there, the bird we saw most frequently was the Blue Jay.

Unfortunately it does not appear on this series of stamps from the USA. 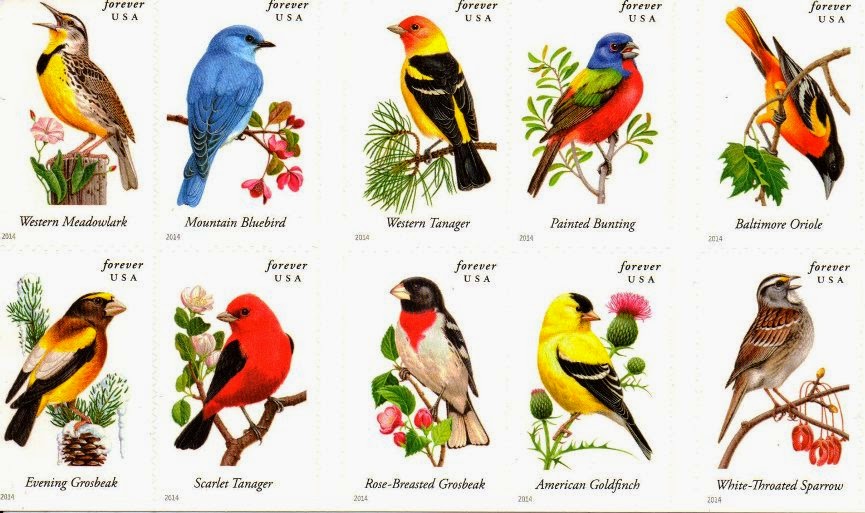 Of these I have only ever seen, not this time, an Eastern Bluebird and the American Goldfinch.

I will have other birds to show you on stamps in two weeks time when Viridian is setting us birds again as the theme.

To see what others have chosen for this week's 'anything you wish' visit Sunday-Stamps-196.
Posted by Bob Scotney at 10:22 10 comments:

This week's prompt is a 'Couple Crossing a River' with a boulder apparently threatening the pair's success. 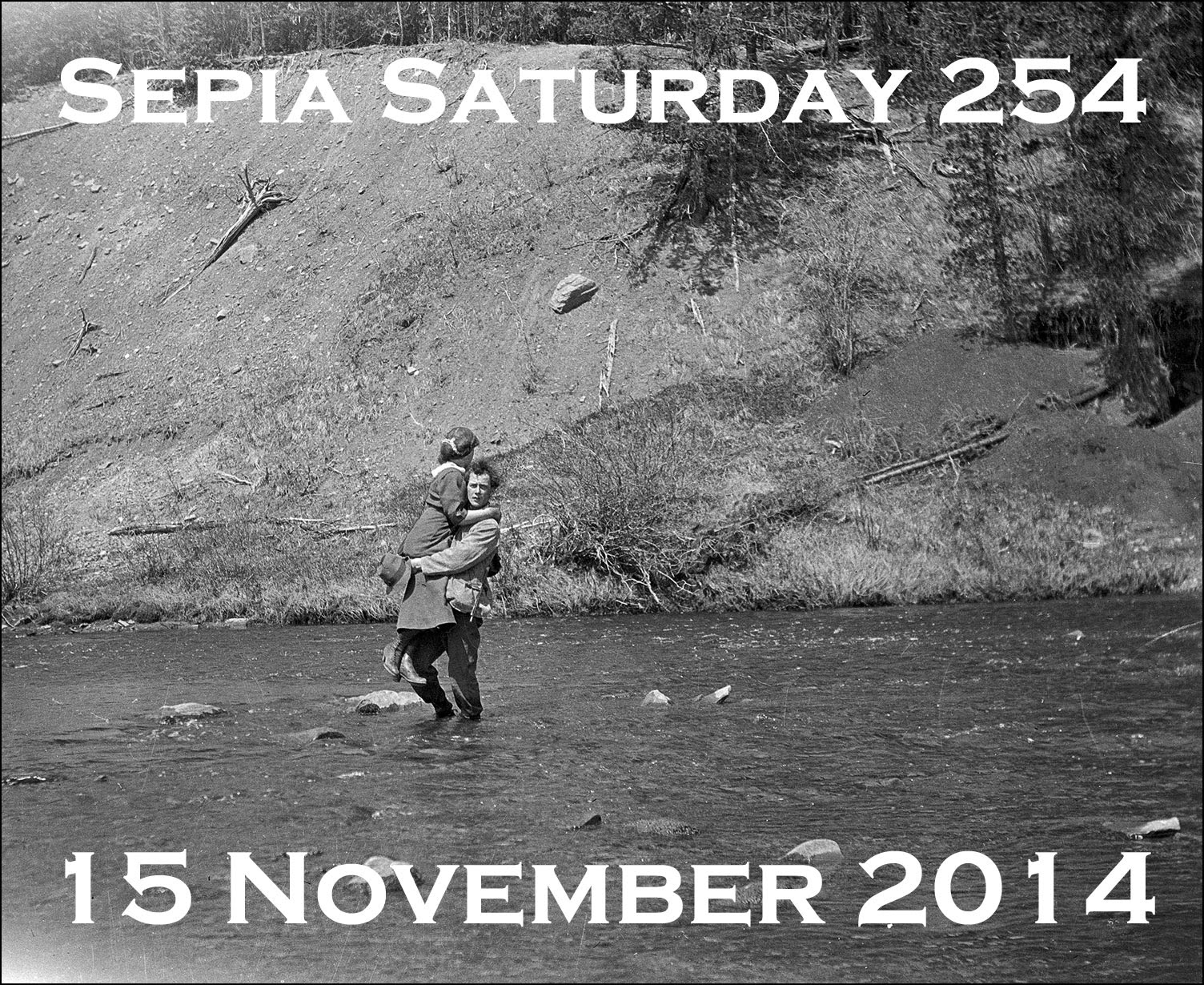 It's a widely held belief that you cannot cross running water without there being consequences.


Now if you doubt that this tale is so,
I met that spook just a year ago,
Now I didn't stop for a second look,
But I made for the the bridge that spans the brook,
Cause once you cross the bridge my friends
The ghost is through, his power ends.

— The Adventures of Ichabod and Mr. Toad

If I had to cross the river at Bristol I'd definitely use the suspension bridge.


The Avon is a long way down even from the road that skirts it.

Daphne du Maurier first saw Cornwall's River Fowey at the age of 19 when their hire car deposited  her, her mother and sisters at the foot of the hill at Bodinnick by the slipway for the ferry to Fowey.

The ferry slipway is at the centre left edge of the photo above. The house with the blue door is the house the du Mauriers were to buy and rename Ferryside and were Daphne was to write 'The Loving Spirit', the first of her novels.

I'm not a lover of ferries as the only Channel crossing I ever took (in 1959) was horrific even before we had left Calais.

The brook that our sons were threatening to jump looked much more friendly in the 1960s'.

The rocks did not look big enough to be stepping stones.

However some do not need any help to cross.

Other damsels chose to rest on reeds beside a lake.

Some just pause to drink at the water's edge with no thought of crossing.

But are those rocks intimidating her.

This pup has been cast adrift to make the crossing on his own.


Now grown up, he would just jump in and swim across.

We have just left him back in Michigan where he lives next to that lake. Of course we have to take a plane back across the pond. But first we have to decide whose in charge.


Do we push or pull?

Well we crossed safely again this year and now it's time for you to cross over to see what other watery treats are on offer at Sepia-Saturday-254.