It's evident from my stamp collection that it is the USA that features its flags the most. However in Great Britain it was 2001 before the Union Jack appeared on a stamp as the subject in its own right along with the White Ensign in a series on the submarine service.

!962 was a World Cup year, Chile was the host country and the cup was won by Brazil.

It was Hungary however who had a series of stamps showing the competing nations.

These are six of the eight stamps in the series. How many flags do you recognise?
The stamps are designed to be viewed with the flagpole vertical so I hope you do not get a crick in your neck.

For more flags test your knowledge of vexillology at Sticks and Flags.

Malawi had stamps for each of the Big Five. The one I like best I've shown before.

I found another leopard on an Ajmad stamp from the UAE.

I must admit that this looks more like a pussycat to me.

Sunday Stamps from the Southern Hemisphere

Apart from obvious countries in South America and Australia/New Zealand I had to get an atlas out to check on smaller nations especially those which are in island chains.

In the end I settled for Indonesia, a country which the equator runs through. I am not sure whether the tourist locations on my stamps are all below the equator, but I'm showing them anyway. 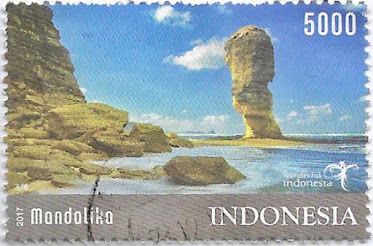 Yellow proved a more difficult theme than I expected once I discarded birds and flowers, many of which I have shown before.

However then colias palaeno fluttered in from Czechoslovakia -

This is a Moorland Clouded Yellow.

In Romania I found an exhibition pavilion with a yellow background from the Fourth Bucharest Fair.

For more yellow related stamps, including Romania, start at Sunday Stamps and follow the links.

In 1999 a series of 4 stamps was issued on one sheet. Each one showed a different berry.
I thought I had all 4 until I scanned the last.
The date gave the game away - this was issued with the set the following year on 15th March.
For other types of food check the links you will find at Sunday Stamps - Neeps
Posted by Bob Scotney at 08:32 4 comments: