In the American Architecture series issued in October 1982 'W' featured in more ways than one.


I had heard of Frank Lloyd Wright before and it was the Falling Water stamp for Mill Run PA that caught my eye. It was pure chance that another 'W' appeared in the second stamp of this pair - Walter Gropius and his Gropius House in Lincoln MA. It was Walter who said 'Architecture begins where engineering ends.'

I chose it because I saw the World Peace stamps (unfranked as you can see). However the embossed envelope  refers to the White House Conference for youth in 1971 - my daughter was very young back then. Unfortunately I cannot read the franking date on the Jefferson stamp but it's in 2000s I'm sure. I wonder where the envelope had been since 1971 when 'Tricky Dickie' was President. The World Peace stamps were first issued on 29 April 1975. My daughter had passed the bar exam in 2010.

To examine other 'W' related stamps checkout the links at Violet's Seeitonapostcard.
Posted by Bob Scotney at 08:31 5 comments:

The Stampworld catalogue heads this stamp 'Waterfalls and Volcanoes.'


The Volcanoes National Park in Rwanda borders National Parks in the Democratic Republic of Congo and Uganda. It is the home of mountain gorillas and golden monkeys and was a base for Dian Fossey. The five volcanoes in the park are five of the eight in the Virunga range - Karisimbi, Bisoke, Muhabura, Gahinga, Subyinyo - but I don't know which one is depicted on the stamp.

I'm sure you will all recognise the Viking ship. One from Norway stands on our mantle piece. 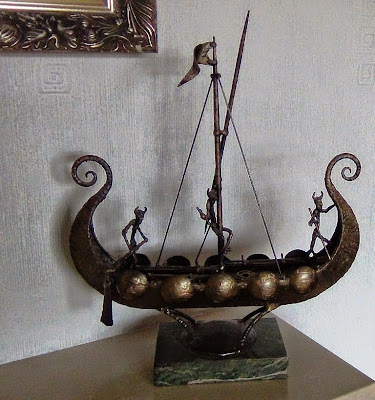 Although we get cats in our garden, none match this -

If you look closely you can see its Latin name is Viverra zibertha.


For 'V' related stamps take a look at the links on Sunday-stamps-v.
Posted by Bob Scotney at 09:37 5 comments:

This was Walter Ulbricht, the German communist leader and someone I vaguely remember.

In the Netherlands I came across this heavily postmarked commemoration for the 100th anniversary of the United Nations Telecommunications Union (ITU).
Finally it was Sweden that came to mind, I just knew that Uppsala would appear on a stamp - even in this case with a double U.
Founded in the 1477 it was a donation from King Gustavus that put Uppsala University on a sound financial footing.The stamp commemorates its 500th anniversary.

The UK press has had articles this week about Tombstone and 'The Gunfight at OK Corral.' I preferred the film 'High Noon' myself - and the ballad that accompanied it.

In case you are wondering what Frankie Laine has to do with 'T' related stamps, this is who composed the music for both films.
This stamp came from the American Music Series for Hollywood Composers.
On the clear morning of August 6, 1945  Little Boy, the first atomic bomb, was dropped on Japan. The man who authorised that act was -

Fortunately the stamp does not commemorate the act. The stamp from the Celebrate the Century Series chose this for the 1940s. Truman is reputed to have had a sign on his desk declaring 'The Buck Stops Here'.

Tom Sawyer is said to be the first book written (in 1904) on a typewriter - by
The stamp is part of the Literary Art Series.

I cannot find a date on the copy of 'The Adventures of Tom Sawyer' that sits on one of our bookcases - but its pages are turning brown! 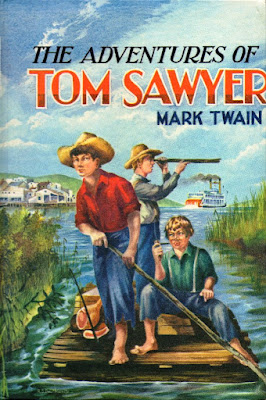 For other 'T' related stamps check the links at Sunday-stamps-t.