The Albert Memorial was one of a set of stamps of London Landmarks issued on 6 May 1980.


The memorial, designed by Sir George Gilbert Scott, is situated in Kensington Gardens. It was commissioned by Queen Victoria to commemorated her husband, Prince Albert, who died of typhoid in 1861.

My next two stamps have a French connection although they are both from the USA.

The Statue of Liberty appears on many stamps, the one I have chosen to show is the oldest in my collection.

A Lockheed Constellation flies over the Statue and the New York skyline - pity the franking has obscured so much.

For more monuments and memorials visit the links on Sunday-Stamps-II-89.
Posted by Bob Scotney at 09:10 4 comments:

More shots from a morning walk waiting for someone to ask, 'Please be seated.'


This is located on a roundabout, seated here you would breath in exhaust fumes from 1000+ vehicles in a hour.

Much better that you sit in a quiet garden with space for your friends.

You would need to sit down at this bus stop,

three each Tuesday and Thursday - none in the afternoons.

It's enough to drive you to drink at the Crown.

Or perhaps you would prefer to take a few cans home and relax in this garden seat.

I know which one I would chose and not wait to be asked. See others please to be seated at Carmi's thematic-photographic-381.
Posted by Bob Scotney at 13:36 10 comments:

We rented our first television to watch the 1960 Olympics in Rome where Cassius Clay won his gold medal. We little thought then that he would become so great.


Can you identify the sports depicted?

To see other Olympic stamps check out the links at Sunday-Stamps-II-88.

Hidden away in Stockton-on-Tees is a place I visit often.


And from the other end -

I confess that this is the exit end for me.

However in my garden some things are hidden in full view.

I guess I gave the game away when I showed The Endless River album from Pink Floyd last week.

It doesn't seem 50 years since they began. Six  stamps were issued on 9 July 2016 to commemorate this milestone - or should I say, 'another brick in the wall?' 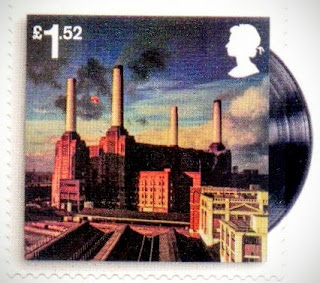 The albums protruding from the sleeves enabled me to enter these for this week's 'Shapes' on Sunday-stamps-II 87.
Posted by Bob Scotney at 08:05 7 comments:

We have had some domestic problems this week with cars and bathroom electrical cord-pull switches, but at least I can reflect on some good fortune in winning our kitty on the lottery jackpot ball.

For a reflective photographic theme I have had to chose some shots from within our home.

I leave you to think of the reflective gentlemen depicted in a drawing of an industrial scene which hangs on my office wall.

For more reflective experiences search the links at Carmi's thematic-photographic-379.

Struggled with lakes but found some interesting rivers this week.

The Aswan High Dam, 11 years in construction and more than 2 miles long, ended the cycle of flood and drought in the Nile region but has also resulted in the loss of fertile soil previously washed down the river.

Marquette, a Jesuit missionary, explored the Great Lakes and the Mississippi Valley with Louis Jolliet. He had founded the St Ignace mission on the north shore of the Mackinac Straits when Jolliet arrived with orders to look for the great river to the west which the Illinois Indians had described.
They set out in May 1673 by way of Green Bay and the Fox and Wisconsin Rivers. They reached the Mississippi and went downstream to the Arkansas River before they returned, convinced the Mississippi flowed into the Gulf of Mexico.


Financed by the Smithsonian Institution John Wesley Powell explored the Green and Colorado river canyons in 1869. The federal government financed further explorations in the 1870s which and to the information on public lands in the Rocky Mountain area and laid the groundwork for irrigation and conservation projects.

the Pink Floyd album, Endless RIver. (More about this next week)

For other watery offerings visit the links at Sunday-Stamps-II-86.

We see many names and symbols that we immediately recognise. However we all confuse trademarks, logos and signs frequently not even knowing the difference.

Many of the photos I show on Carmi's weekly challenges are things I see on my daily walk to fetch a newspaper.


It's a few years old and well worn, so much so in fact that you cannot read the 'Head' name it carries. Whether 'Head' is a trademark I wouldn't know.

I know your eyes are good enough to see the yellow tag it carries. Is this a trademark or just a logo?

There is a canine connection in my next shot too in which you should recognise a well-known symbol as well.

In 1900 the Shell Transport and Trading Company applied for its first trademark using a shell logo, which is still on the trademark register. The logo evolved, being redesigned in 1904 when the pecten or scallop shell was introduced.

Now where can I get a pair of shades like that dog? I'll bet they are trademarked.

To see other 'trademark' interpretations visit the links at Carmi's Thematic- photographic-378.