I had used my archaeology stamps before so I looked for those with an anthropological theme this week. It was not as easy as I thought it would be.

However I found something from Australia and Zambia that fit the bill.


These are set up at a grave in memory and honour of the Dead, Bathurst and Melville Islands, Northern Territory.

The first definitive issue in Zambia on 24 October 1964 had a series of stamps depicting ancient and modern facets of Zambian life including this masked dancer.

I'm disappointed that I missed the Great Britain stamp showing  Mary Leakey but I can show you another female anthropologist instead.

This stamp was part of the Celebrate the Century Series - 1920s.

To see other archaeology and anthropology selections check out the links at Viridian's Sunday-stamps-177.
Posted by Bob Scotney at 09:28 9 comments:

People paddling in this week's prompt -

reminded me of an old postcard sent around 100 years ago from Mabel to Mrs Baker.


The card was posted on January 3rd but we have to work out the year from its reverse side.

"Dear Mrs Baker, Brighton is very windy. We went out this morning and nearly got blown away, This afternoon we went on the pier.
Jan 3rd, Thank your for the litter (sic). Wishing you a happy New year.
With love from Mabel."

I can't find either Littledene on Victoria Road or a Mrs Baker in that street although there are many 'Bakers' in the neighbourhood.

I doubt that Mabel would have been paddling on Brighton Beach in January all those years ago. However the postcard shows that it was a popular pastime there at other times.

Brighton beach is made up of shingle and not the sort I would be happy paddling from. I prefer the sandy type that we have in the north-east.


And on the other side of the pier on the same October day.

Well at least the dogs were paddling if not the people.

Now you may paddle over to Sepia-Saturday-234 to see who else is getting their feet wet.

We have spent the weekend combating wasps. My wife found out the hard way that they were not amused when the clematis was being pruned and they attacked when disturbed. They had a nest in our bird box. The only way we defeated them was to drop the box into a bucket of water and hold it under with a house brick for 24 hours.

Other creatures are much less threatening in the summer sun.


This photo was taken from 15ft away and through the double glazed window of our lounge.

I also came across a youngster that was not in the least bit afraid.

They must have known that it's summer time in the village this week.

Last Saturday it was the annual scarecrow competition. But what says it's summer in England more than a game of cricket?

He's just one in the tableau of -

Twenty-six houses hosted scarecrows this year. I'll post more of them in separate blog posts as I did last year.

To see other summer events it will be worth your while to follow the links at Carmi's Thematic-photographic-298.
Posted by Bob Scotney at 19:42 10 comments:

With the World Cup in full swing it seemed appropriate to choose football stamps this week.

The tournament in Sweden in 1958 saw Brazil win the cup. Poor England had their worst result ever until this year when we are 'out' after just two matches. However my World Cup stamp from that year comes from none of these three countries.

1962 saw Chile host the tournament, won yet again by Brazil. My stamp for this is not from Chile either but from -

A stamp from Ruanda commemorated the Cup in 1966.

Of course the Cup that year was hosted by England; Great Britain issued a set of three commemoratives on 1 June 1966. I only have two of these.


The stamps were:
The 4d stamp was reissued on 18 June 1966 with the wording added "ENGLAND WINNERS"

I wonder how many tears there will be and how many years we will have to wait to see that again.

To see what others have chosen this week follow the links at Viridian's Sunday-stamps-176.
Posted by Bob Scotney at 11:26 10 comments:

The Yorkshire sun is shining on Alexander (Alan's son) and Heather today. May they go for gold as some of us have done..

That's the church in which my wife and I married in 1958. Sadly now it has been converted into shops.

However on that fateful day a wedding group graced its doorway.

The only survivors from this group are my wife and I. However I can show you Bob and Amy with one of their granddaughters as a bride from some time later.

Time warps as you get older and already our golden wedding has come and gone. In 2008 our sons and daughter treated the happy pair to a celebration on Tresco in the Isles of Scilly.

And just so that they are not left out, here's the 'kids' with their mother.

One of the things we acquired for our golden wedding was a souvenir rosebush. Here's how it looks today nearly six years later.

I tried to find some music to end this post and could find nothing better than;-

The title may be 'One Rainy Wish' but listen to the words - 'Golden rose, the colour of the dream I had not too long ago.'

For other nuptial reminiscences accept the invitations at Sepia-Saturday-233.
Posted by Bob Scotney at 19:24 15 comments:

A set of four commemoratives on British Fairs were issued on 5 October 1983. I only have the first of these.

The other three covered

From 2002 I found some circus stamps


You'll notice that this First Class stamp was a Europa issue. However the 45p stamps was not.

Viridian's theme for this week has been 'circus clowns or fun fairs' - to see other contributions check out the links at Sunday-stamps-175.
Posted by Bob Scotney at 09:39 12 comments:

A Lot of Flak - Sepia Saturday

Back in 1941 when young Gunter approached his local station I doubt that he would have seen a sight like that in this week's prompt. 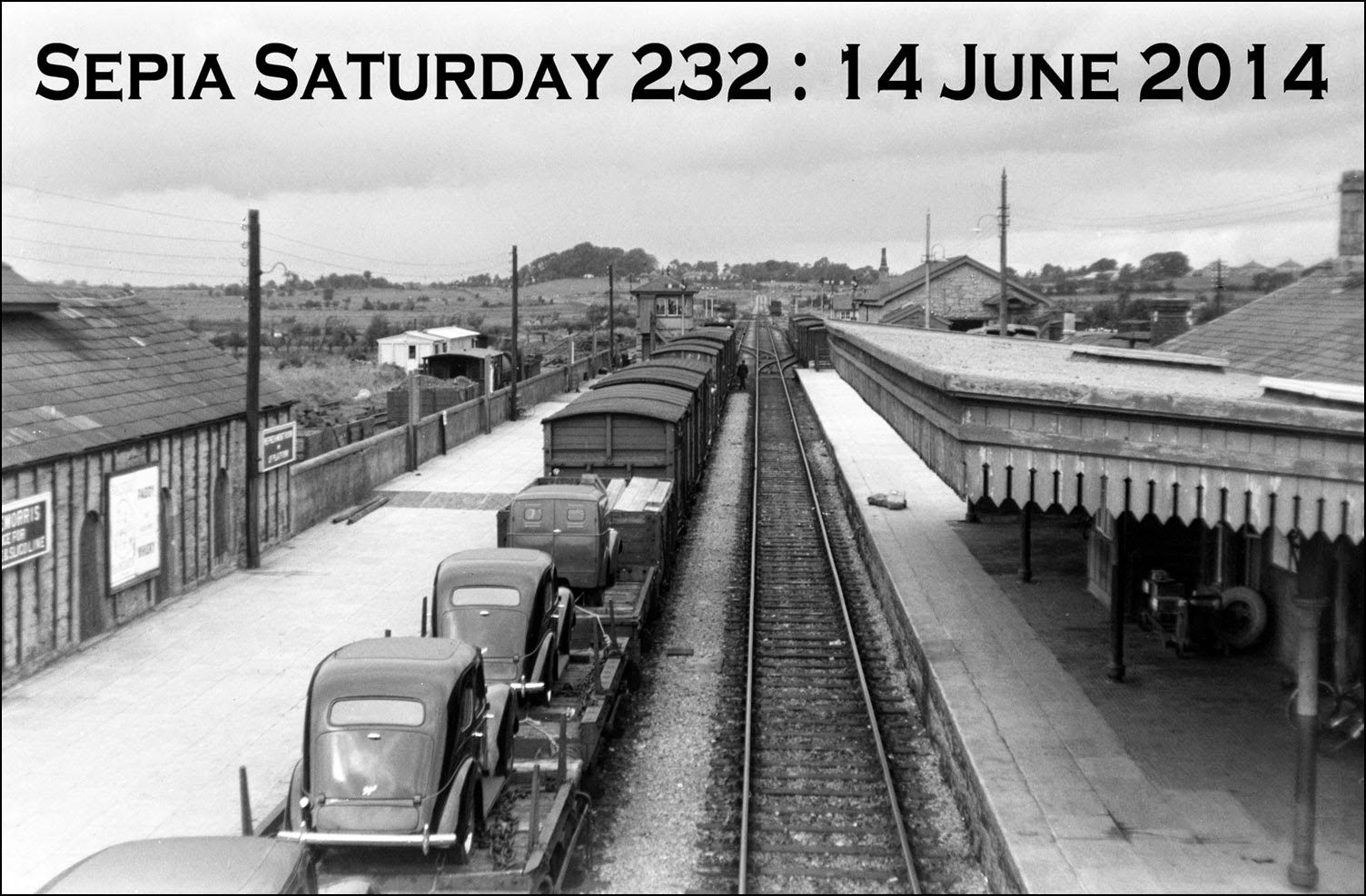 After all he would catch a train from Berlin-Humboldthain and it probably did not look as peaceful as in 2010.


Nor would the platforms have been as empty as this.

On his way from Müller Strasse to the station he would not have had such a picturesque view of the park as this.

Back in 1941 the Observation Point Bunkers had a more sinister use. They formed one of the three blockhouse towers in Berlin for antiaircraft guns ordered to be built by Hitler in 1940 and used by the Luftwaffe to defend the city against the Allies air raids.

At he end of the war the tower was partly demolished. Today it is inside Humboldthain Park.

I just wonder whether Gunter was as close as this to the towers when he took his train journeys.

Gunter was a young man in 1941 and could travel by train at half fare third class between Berlin - Humboldthain and Berlin - Karow.

Unfortunately I cannot make out his surname; he lived at Müller Strasse 1 and apparently was a gardener (Kleingärtner).

I hope he survived the war and that the Flak Tower protected him.

All aboard for more trains and train journeys at Sepia-Saturday-232.
Posted by Bob Scotney at 16:13 13 comments:

A set of stamps commemorating anniversaries was issued on 2 April 1969. It contained a stamp I have shown before.


And a stamp commemorating the first England-Australia flight made later in 1919.

The plane is a Vickers Vimy. The Australian Government had put up a £A10.000 prize for the first Australians to fly from Great Britain to Australia. Captain Ross MacPherson Smith. his (Lieutenant) brother Keith. and mechanics Wally Shiers and Jim Bennett were the crew that flew from Hounslow Heath in London to Darwin with as many as ten stops along the way.

How much quicker is it these days on a plane powered by the invention of Sir Frank Whittle.

Now you should jet off to see what other air transport awaits at Viridian's Sunday-stamps-174.

I sat watching television news early this morning when there was a loud thud on the lounge window. Outside with its head down in a flowerpot was this bird:


I turned it onto its side to take the photo. It was still alive, but out for the count.

I picked it up and it managed to open one eye. Rather than leave it in the flowerpot I wrapped it in a small hand towel and left it on the paved path in front of the window.

Although it was more comfortable its eyes were still closed. In a short while it was more lively. 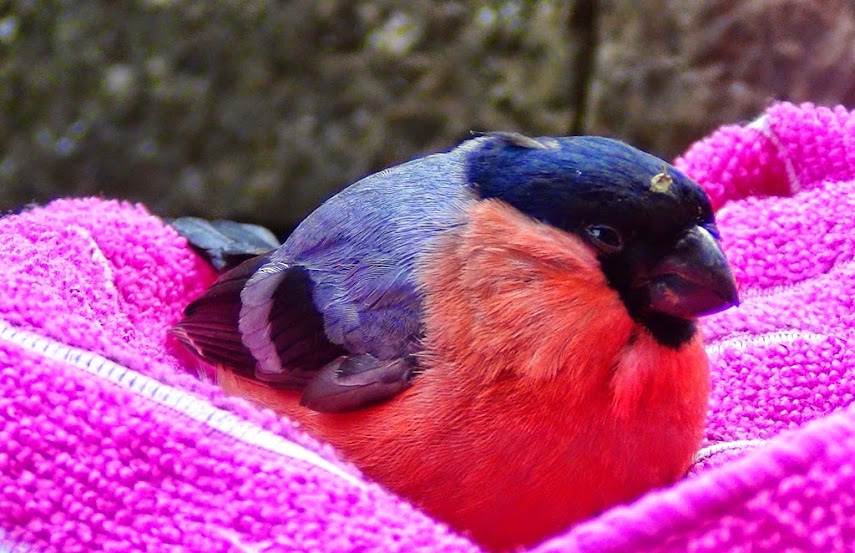 I watched it through the window as it revived but thought I would not disturb it again just to remove that small dead leaf from its head.

After about an hour it staggered off the towel and went behind the flowerpot in which I had found it. When I went to check that it was alright it flew into one of our trees apparently none the worse for its painful clash with our double glazing.

We don't see bullfinches all that often but the male is without doubt the most colourful of the birds we see.

It's not often that I have a second try at one of Carmi's themes.

One day recently a new sign suddenly appeared in our village.


My first thought was that this is a strange place to put a sign like this, a mere 20 feet before the speed limit expires.

Or is it sneaky as the approaching van cannot see what it says? If it's speeding will it get caught?

The car leaving the village will have seen the sign, but is it too late for it to get caught as it now can increase its speed from 40 to 60 mph?

In either case how will the police know what their speeds were?

No-one gets any warning they are there - and the speed check sign has gone.

Guess we will just have to read the court case reports to see who got caught!

To see signs seen by others check out the links at Carmi's Thematic-photographic-297.
Posted by Bob Scotney at 18:36 8 comments:

I can claim a faint connection to one of these four British conductors.

From left to right, they are -


I picked up the presentation set  recently, including a PHQ card for each of them.

The four stamps below are in the same order as the first photo.

Sir Henry Wood founded the Promenade Concerts held in the Royal Albert Hall and which are named after him. Of course all four conducted concerts there.

Sir Thomas Beecham's fortune was based on those famous pills advertised as 'worth a guinea a box'. I may have taken a few in my time but that is not the 'connection' I claim.

Sir Malcolm Sargent was brought up in Stamford, Lincolnshire and won a scholarship to Stamford School. Much later so did I, but there the connection ends as no-one could say I am musical at all.