Visitors to the Glastonbury Festival probably don’t give a thought to the fate of Richard Whiting. As an old man convicted of treason he was hung, drawn and quartered on Glastonbury Tor.

When Henry VIII and Thomas Cromwell set about the dissolution of the monasteries in England the Benedictine Monastery Glastonbury Abbey was the wealthiest Abbey in England.

Supposedly Bishop Richard Whiting tried to bribe the King. His steward was entrusted with a gift of twelve title deeds to English manorial estates. To protect the deeds from thieves they were hidden in a pie. However the steward stole the deeds to the manor of Mells, the ‘plum’ of the twelve manors.

The jury that found Bishop Whiting guilty included the treacherous steward. Following the destruction of the Abbey the steward moved into the Manor of Mells.

The steward’s name was Horner; the family lived at Mells until the 20th century.

The lyrics to a nursery rhyme were first published in 1725:

Little Jack Horner sat in the corner
Eating his Christmas pie,
He put in his thumb and pulled out a plum
And said “What a good boy am I!”

That’s an accolade I have earned today when I presented my wife with a bag of plums picked from a tree with the permission of the owner of the garden.

Now my wife has the plum job of baking the pie. 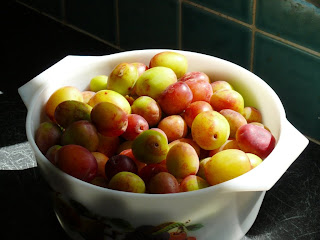 Essex, Northumberland and Bedfordshire are the location for our August ghosts.


Let's start, not with an Essex girl, but with the sounds of crying and wailing in despair reported on both the 11th and 22 August at Beeleigh Abbey, Near Maldon. Sir John Gates was held at the Abbey to await his execution which took place at Tower Hill on 22nd June 1553.

Beeleigh Abbey was built in 1180 for the White Canons. Henry VIII granted the Abbey to Sir John in 1540. Sir John was a supporter of Lady Jane Grey who became the nine-day queen. When Queen Mary [Bloody Mary] came to the throne supporters of Lady Jane were not deal with kindly. Sir John was beheaded; it took three strokes of the axe to do the deed.

The biography of Sir John Gates may be seen at: www.tudorplace.com.ar/Bios/JohnGates.htm

On 15th August at Rock in Northumberland a grey lady may be seen walking from South Charlton to Rock on the anniversary of the death of her husband. Now she really takes her life in her hands as she has to cross today's A1. She is thought to have been a former occupant of Rock Hall. I have been unable to find more detail about this haunting. Rock Hall, an 18th century house, is now a school at Rennington, near Alnwick.

A phantom woman, dressed in black, believed to be the nun, Berta Rosata, is seen at Chicksands Priory in Bedfordshire on the 17th before she disappears through a wall.

Chicksands Priory is mentioned in the Doomsday Book in 1086. The Gilbertine Order took up residence in 1147. The Priory became a refuge for Thomas a Becket from the wrath of Henry II. Berta Rosata was the nun, pregnant by one of her superiors, who was bricked up alive in one of the walls; the last brick was not put into place before she had been forced to watch her lover being beheaded.

Chicksands was to play an important part in WWII when it received signals later decoded at Bletchley Park where the codes for the German enigma machines were decoded. Officers and civilians at RAF Chicksands reported seeing more than one phantom nun. After the war Chicksands became an American airbase; now it is a secret intelligence base for the British Military.

The history of Chicksands may be found at www.sheffordtown.co.uk/chicksands-history
Posted by Bob Scotney at 16:01 1 comment:

A dog with an interesting name -

Elemark Waterlily is a great name for this pedigree Bearded Collie. A lively and intelligent dog as befits this breed of herding dog, she is known to everyone as Lily. She will be two early next year (2010) and already has acquired her slate grey colour – she was born black. Lily’s wiry coat does not moult but, as you can imagine, drying her off after a walk is a regular task even if it is only her feet that are wet. 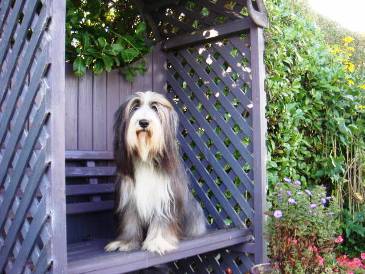 Lily is an active and agile dog; who has taken to agility training as though she was born to it. Jumps, tunnels, elevated walks, A-frames, weaves are all fun for her. The paddock behind her home contains two jumps, for Lily, not for the horses and the pony that she respects and does not hassle at all. She lives quite amicable with a cat as well. However at night the door to the utility room is closed just in case she takes a liking to the ‘presents’ the cat brings home.

Bearded Collies are herding dogs, but Lily does not attend the local herding competitions as she has been desensitised to sheep. She has however a collection of cups and rosettes from shows and obedience contests. In addition to the jumps there is also a long corrugated plastic tunnel in the corner of her paddock. Say ‘tunnel’ to her and she’s off at full speed through it from one end to the other. 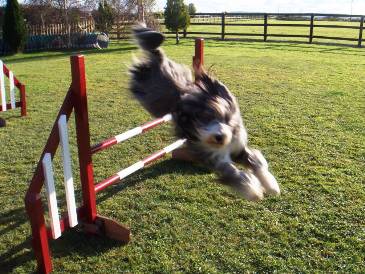 Lily has participated in obedience training, based on play and reward and holds the Kennel Club Good Citizen Gold Award (One of the six UK Bearded Collies this year). Her picture will soon appear on the roll of honour. She is responsive to commands; ‘Sit,’ ‘Down’ and ‘Stand.’ These are followed by ‘High Fives’ with her paw.

Her normal food is Arden Grange hypoallergenic lamb and rice; during training she is rewarded with little bits of chicken. She will take dog biscuit treats gently when offered – she gets nothing from the table.

All squeaks have had to be removed from her collection of soft toys. She also has a ring for retrieving; when she has raced to pick it up the ring often flips up to frame her face. No-one has succeeded in photographing her like this as you need to be very quick.

She gets two walks a day, with the longest in the morning. In the village Lily is on her lead, when loose in the fields the rabbits soon know she is about.

Lily has the run of the house, but is not allowed on any furniture. She rests and sleeps on a large cushion covered by a vet bed which draws any moisture from her feet. Naturally the bed is next to the radiator – after all she is a pet.

Lilly delights in getting wet and will run backwards and forwards through the deepest puddles making a noise that sounds for all the world like ‘Yeah! Yeah!’ Perhaps that’s why her name is Waterlily.
Posted by Bob Scotney at 13:03 1 comment: