I could have just stayed in my office for this 'Aged' theme. After all everything will be modern when compared with what normally sits in a saucer on my desk.


When it comes to buildings these two are fairly 'aged.'

The date on the sundial says 1786. At the left is a modern extension to the cottage. 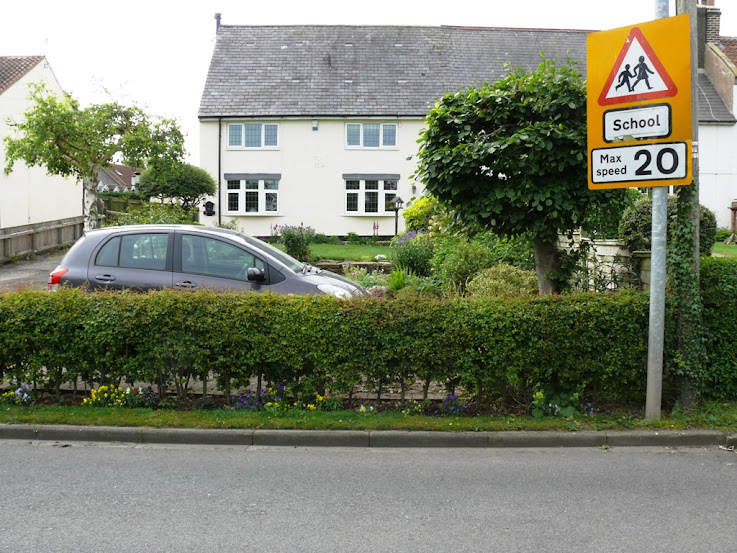 Until you read the plaque on the wall dating it to


Next to the entrance porch to the Church stands a gravestone that has seen better days.

I wonder whether worshippers used to bring their horses to church in the days before motor cars.

But when it comes to the oldest things I have a small collection to go with the first three fossils you saw.

That's a 10p coin at the right next to the ammonite from my first picture. The fossil which looks like a hook is a gryphea.

I wonder how many million years it took for the calcite to be deposited in the animal's body cavity.

I've aged enough to be considered an old fossil by some but modesty forbids me from including a picture of myself.

So for more aged items you need to follow the links at Carmi's thematic-photographic-339
Posted by Bob Scotney at 19:25 8 comments:

A few more scarecrows for you to look at. Have you chosen your favourite(s) yet?


If you are fond of gardening perhaps this is for you. Mind you Monty Don always has his dog Nigel to accompany him in Gardeners World.

I don't know what to call the next one with a bunch of flowers.

With a heat wave forecast for this week the next scarecrow got it right - if only I had got the whole of the notice in.

While Homer has things to say to Bart, Marge and Lisa

Rather a contrast to

There is another batch still to come before you make your final selection of the best scarecrow of all.

All will be revealed in Scarecrows V later in the week.
Posted by Bob Scotney at 18:59 5 comments:

The ports and harbours on the stamps I have this week are all associated with islands - one from the Isle of Man and four from New Zealand.


Once a major fishing a trading port in the south of the Isle of Man the inner harbour and pier were created in 1912.

Wellington and Auckland are located on New Zealand's North Island. Wellington is the country's capital.

Both are in the South Island. Port Chalmers is the main port of  the city of Dunedin and lies 10km inside Otago Harbour.

For other ports of call and harbours in which to take shelter follow the links at Sunday-Stamps-II-28.
Posted by Bob Scotney at 10:18 8 comments:

A number of entries in the Kirklevington scarecrow competition had the same idea. 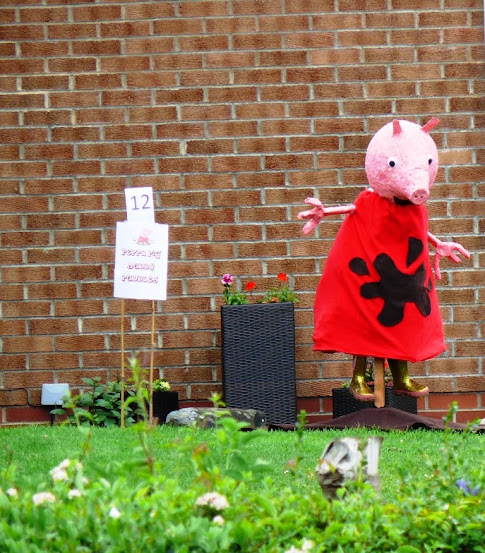 Perhaps someone can tell me who the other character is.

Straw bales are ideal for Bob's body as can be seen in these other scarecrows. 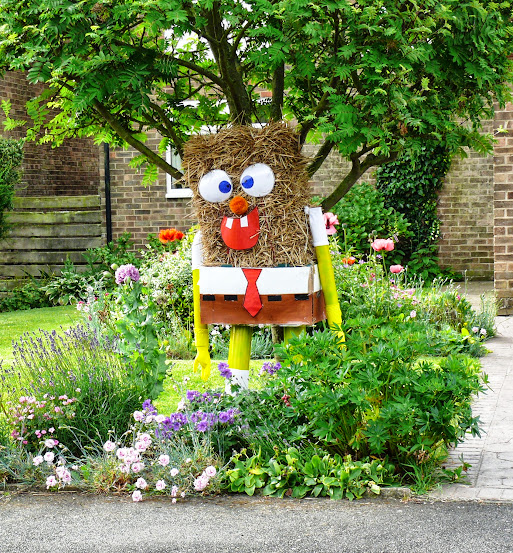 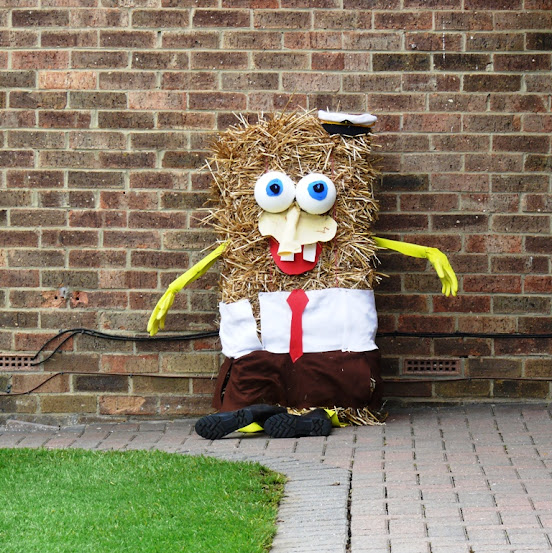 When it comes to Star Wars it should be no surprise that:


appeared more than once.

However a character to appear just the once was

You need to follow this series of posts before you decide which scarecrow you like best. [There's more to come.]

The judges verdict will be revealed in the last post some time next week.

In my home village of Kirklevington in North Yorkshire 20-28 June is Kirkfest Week. 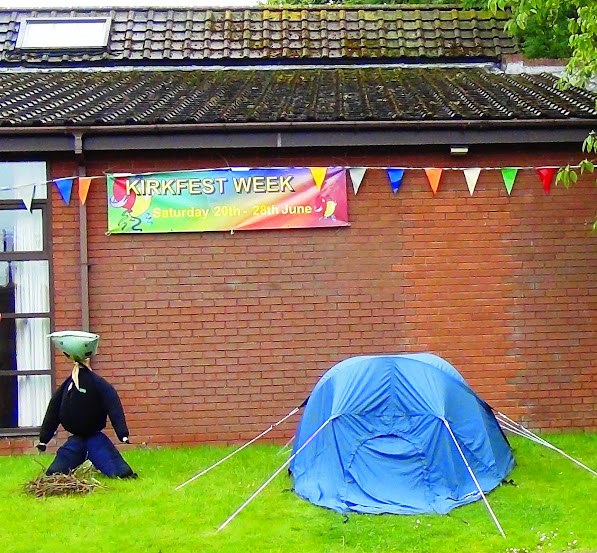 One of the first events is the annual scarecrow competition. The theme this year was TV shows.

I have to confess I did not recognise the show in all of them and I suspect that a number are from children's television.

However at the Village Hall there was no mistaking:

Others are more difficult to place. 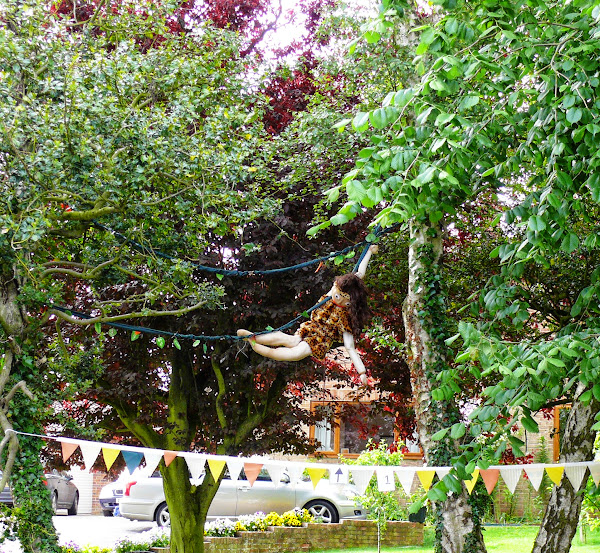 Most of us would recognise Del Boy though in:

I'm sure that this would have gone down well with the runners at; 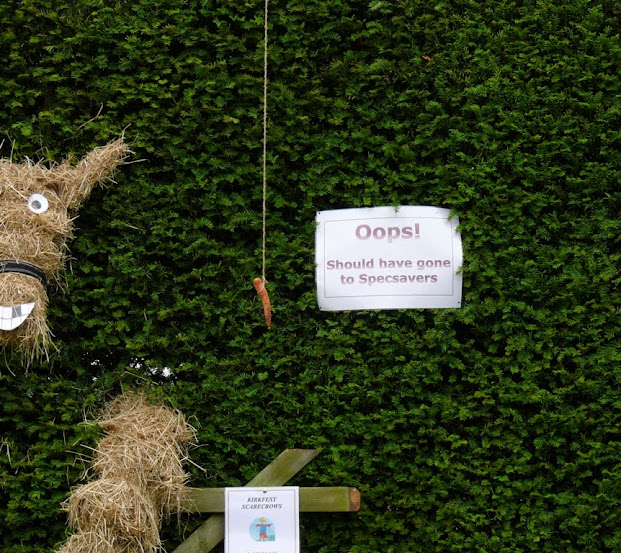 Perhaps this few shots will act as a carrot to bring you back for more scarecrows in later posts.

Don't forget I shall ask you which you thought the best when we get to the end.
Posted by Bob Scotney at 13:33 4 comments:

This week is the annual Kirkfest week in our village where a scarecrow competition was held last Saturday.

This gives me a photo opportunity the results of which I will share later. Walking round today it gave me the opportunity to look for straight lines too although the line I had to walk was anything but straight.

Before I left our garden the fence caught my eye.


Straight lines can be horizontal too.

Farmyards have always attracted me, especially those with Dutch barns.

It's perhaps as well that the steps up to the local railway line are not readily accessible.

The gate to a local farm contains even more.

Even the road home had lines on it.

The lines look straight enough to me.

For more sets of lines check out those at Carmi's Thematic-Photographic-338.
Posted by Bob Scotney at 19:12 9 comments:

The only children's drawings I could find were on Christmas stamps which didn't seem appropriate to show on the longest day of the year.

However this first day cover fits the bill commemorating a famous poet and illustrator.


I found this at my favourite market stall.

I'm sure you are all familiar with "The Owl and the Pussycat."

To see other cartoons/drawings please check the links at Sunday-Stamps-ii-27.
Posted by Bob Scotney at 08:27 9 comments:

I thought that I was going to miss out on this theme until I checked my archives from some years back.

I think the photographer had had a drop too much,

For dinner tables in a more sober vein check out the links at Carmi's Thematic-photographic-337.

I'm not musical at all but I know that you will need some instruments to play.

What could be better than these traditional instruments from Guinea-Bissau.

Even I can work out what you would need to do with these.

I wonder what a German composer would have made of them.


He would have probably joined in to celebrate his 150th anniversary on his piano or his guitar.

Would the violinist celebrating the 50th anniversary of the British Council promoting the arts have joined in too at the Acropolis in Athens?

But perhaps you prefer -

To dance to other tunes check out music made by others at Sunday-Stamps-ii-26.
Posted by Bob Scotney at 09:18 6 comments:

I've been looking for a theme for the A-Z Challenge for 2016 and have been considering wild flowers. This means that recently I have been out and about photographing a few things that grow.


If you look closely you should be able to identify a few hidden faces.

In April I came across some Lords and Ladies

The Lords and Ladies go under a number of interesting names such as the cuckoopint, jack in the pulpit, Adam and Eve bobbins and even naked boys. These names relate to the plants likeness to male and female genitalia as you might see from these later photos. 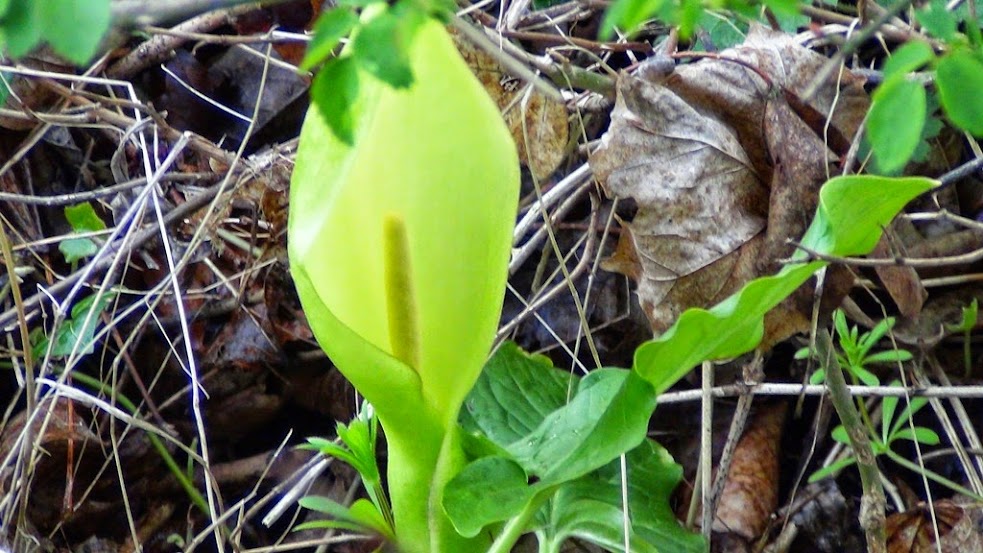 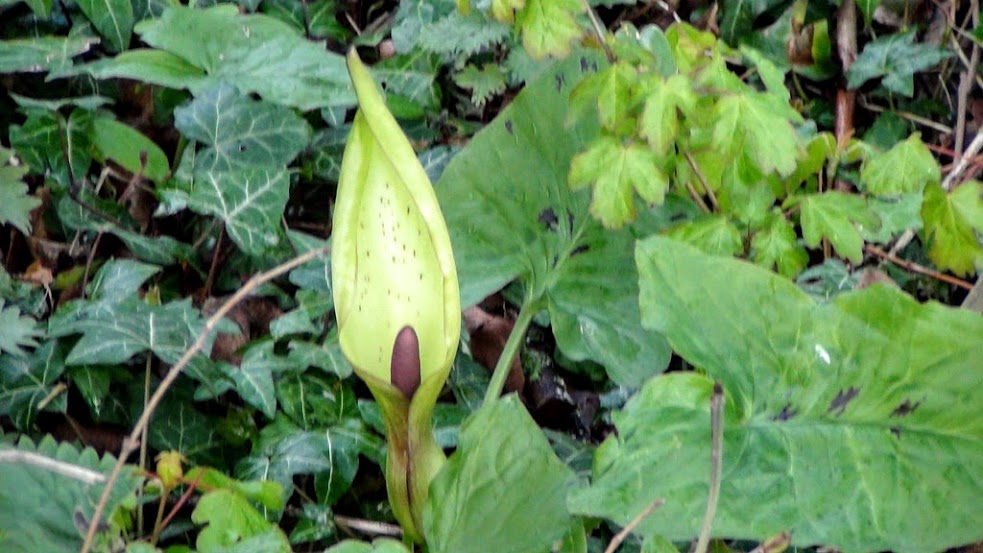 Unfortunately these have now been cut off in their prime by the local council's grass cutter so I shall have to look for others that are in flower and wait until around July for their red berries to develop.

Another plant that will escape the grass cutters attention is this fine specimen.

It doesn't seem nearly 70 years since I use the stem of a plant like this for a peashooter!

to grow into this!

Meanwhile I'll have to cut the green stuff that grows in our garden myself.

For other stuff inspired by Carmi just visit Thematic-photographic-336 and also share some of your own.
Posted by Bob Scotney at 19:15 8 comments: