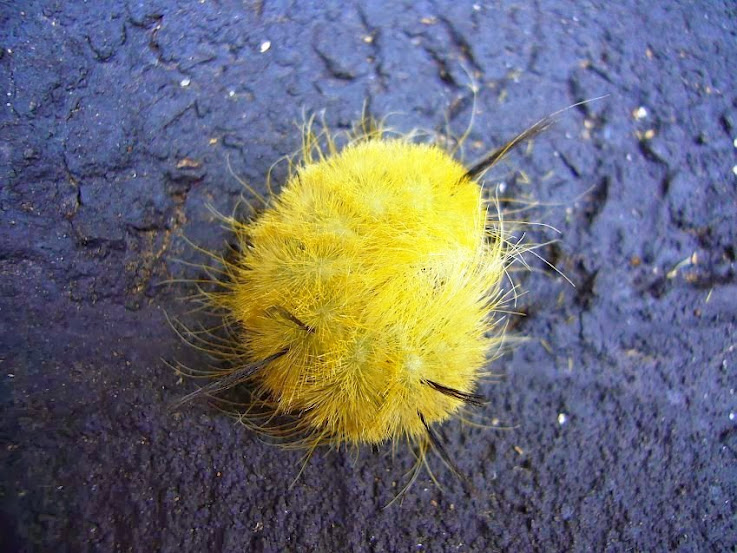 I didn't like the look of those spikes even when it uncurled.

I'm not allowed to say how many years ago the next shot was taken. It fits the theme but didn't come out how I wanted at the time.

The nearest I could get to a golden glow from autumn colours was this shot from last year.

Finally there's a golden boy, although Americans would call him yellow.

To catch  the rest of that golden glow cross over to Carmi's Thematic-photographic-267. The Durham Ox was bred in 1796 by the pioneering shorthorn breeder, Charles Colling of Ketton Hall, Bafferton, Nr Darlington in the North East of England. The beast became know as the Ketton Ox when it was exhibited in Darlington in 1799. 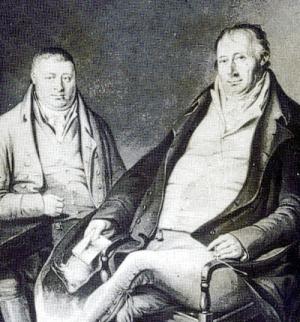 The Colling brothers and a man named Thomas Bates, who farmed at Kirklevington, have been given much credit for the development of the Durham Shorthorn breed of cattle. 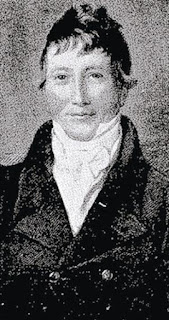 Thomas Bates
The Kirklevington estate in what is now North Yorkshire has been owned over the centuries by such aristocratic and royal landowners as William the Conqueror, Robert de Brus, The Percys, Henry IV and Henry V. It was finally divided and sold by the Earl of Strathmore to two wealthy business men one of whom was Henry Hutchinson who was mayor of Stockton-on-Tees for a time. His nephew, John, bred shorthorns at Stockton and named one of his bulls “Kirklevington.”

In their childhood John and his brothers and sisters became wards of Henry Hutchinson. In their early childhood before they were orphaned the Hutchinsons had been friends and neighbours of the Wordsworth family at Penrith. Mary Hutchinson had been born at Stockton-on-Tees and went to school there when she was sent to live with her Uncle Henry.

At twenty-four Mary announced she was going to marry William Wordsworth. Her uncle did not approve; he considered Wordsworth had no profession – he had changed his mind by the time Wordsworth had become Poet Laureate. 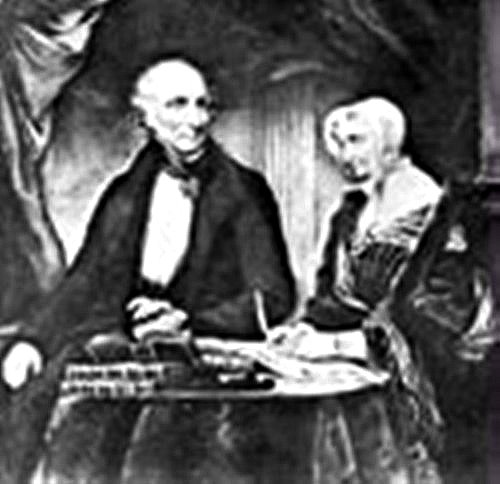 William and Mary were married in 1802. William wrote a poem about his wife in 1803.
‘She was a Phantom of delight
When first she gleamed upon my sight;
A lovely Apparition, sent
To be a moment's ornament;’

But it was Mary who is said to have composed the last two lines of Wordsworth’s often quoted poem; he may have ‘wandered lonely as a cloud’ to see ‘A host of golden daffodils;’ but its Mary’s words at the end:
‘And then my heart with pleasure fills,
And dances with the daffodils.’

I live in the village of Kirklevington less than a mile from the house which was once Thomas Bates farm and from the churchyard where his gravestone stands. 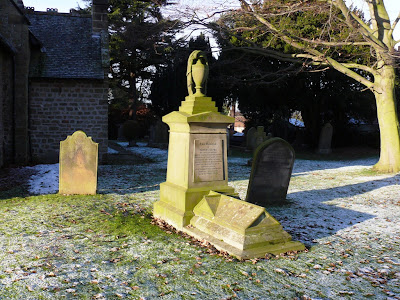 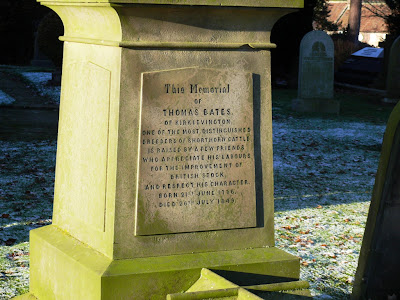 St Martin’s Church at Kirklevington also has a memorial window to him which incorporates a shorthorn beast. 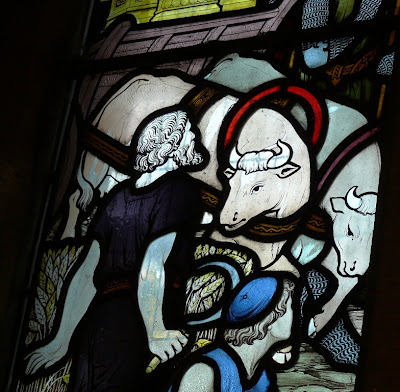 I happen to have been born in the village of Ketton in England’s smallest county of Rutland. Finally I may also be able to toast you all this Christmas in one of Yarm’s many pubs less than three miles away.

My first thoughts when I saw this week's theme were that I haven't any dirty photographs and that I would never take one. One second thoughts I decided that perhaps it was just my mind.

When it comes to dirt, you may be sure that dogs will never let you down.


Although she crossed the Rainbow Bridge some years ago, there was a time when Maxie liked nothing better than to run through a black and sticky swamp. If that could be combined with a roll in lots of deer poo she was in her seventh heaven. In the photo Maxie had just had a bath after just such an excursion. Still wet she sulked and found a patch of garden in which to lie and get dirty again.

Lily is the latest youngster to take up the dirty challenge,

My daily routine includes a walk to the local garage to pick up a newspaper. In filthy weather as it is at the moment you come across some interesting things,

However I'm not sure my next shot is really on the theme.

But surely this qualifies.

The local airport is still called Teesside Airport by the locals. But a few years ago they changed it name to Durham Tees Valley, despite the fact that Durham is nowhere near. This also meant that the airport name was then too large for the road signs, This is how a sign near my local garage has ended up.

That concludes my let's get dirty post; for more check in at Carmi's Thematic-photographic-266.

As Viridian has given us a free choice this week here are four stamps that I acquired recently from the 'Celebrate the Century' series.


The reverse of all stamps in the series carries text that tells you about the stamp concerned. The reverse of these four, thanks to the demon scanner, is a mirror image but I an sure you can work it out when you see what it says.

Apologies for the damage to the Margaret Mead stamp. I also have to confess that I had not heard of her or Emily Post.

To see what others have chosen this week cross over to Viridian's Sunday-stamps-143.

Life in the 'Wild'

Each year when we visit Michigan I try to get some wild life shots. Three dogs running around often makes this difficult. However I usually manage  to get a deer or two before they are frightened away.

This chap stopped to pose.

And one of the largest grasshoppers I've ever seen.

The piece of metal to which is clinging is 3 inches deep.

Not much to show for three weeks - perhaps they were put off by the high temperatures at the time in September.

I never realised how few street scenes I take until Carmi's streetscape theme came up this week. Here are some from my archive dating back into the 1980s in Stavanger.


This was taken on a Sunday in the old part of the town. In contrast a shopping street is much busier on a weekday.

As part of her German course at Birmingham University my daughter spent a year at Freiburg University in Germany. We visited the city later, took some photos and asked her 'Wo ist das?'

But when you live in a village as small as ours, this is what you may see in Spring.

Looking down the lane instead - it's still empty.

These last two pictures have cheered me up a bit as it has been wet and windy all week.

For more street scenes just stroll over to /thematic-photographic-265.

The set of British Auto Legends issued on 13 August this year are just right for this week's car theme.


These have not scanned very well with the names indistinct and the true colours not shown - the Lotus at the bottom right is red not orange; the Rolls at the top centre is not such a bright blue.


For more cars just drive over to Viridiand's Sunday-Stamps-142.
Posted by Bob Scotney at 10:12 10 comments:


In 1845 New York was to greet the SS Great Britain when she completed her first Atlantic crossing, having left Liverpool 14 days and 21 hours earlier.

Disaster struck in 1846 when Captain James Hosken ran the ship aground in Dundrum Bay, Northern Ireland.

The great ship was not rescued for nearly a year and in 1850 the Great Western Steamship Company sold her to Gibbs, Bright & Company. Two years later she started her life as an emigrant steam clipper carrying people to a new life in Australia.

In the years between 1852 and 1875 the SS Great Britain carried around 14000 people to Australia, besides acting as a troop ship for the Crimea War (1856) and carrying troops needed in response to the Indian Mutiny.(1857). On a lighter note she carried the first English cricket team to Australia.

He role changed again in 1882 when her engine and funnel were removed and she was converted to carry cargo. She carried Welsh coal to San Francisco. She suffered bad storm damage off Cape Horn in 1886 and limped into the Falkland Islands. Bought by the Falkland Islands Company, she remained economic to run until 1933. By then she had become unsafe to even be used as a floating warehouse for coal and wool. In 1937 she was scuttled in Sparrow Cove, a remote shallow bay.

Her masts were removed and on 19 July 1970, 127 years to the day after her launch the SS Great Britain returned home to Bristol.

Restored to all her glory she was relaunched on her 162nd birthday in 2005. Today she can be seen in her original dock on Bristol's Historic Quayside.

This is a Sepia Saturday post inspired by another later launching. 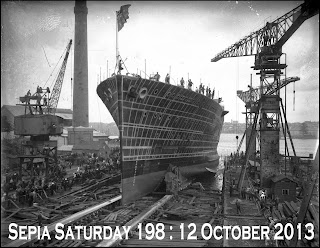 I wonder whether any of our Australian Sepians can trace their roots back to Brunel's great ship.

For other flotations sail over to Sepia-Saturday-198.

I have tried several things this week without success, even experimenting with a reflective shower.


On second thoughts that has shown quite enough.

Whereas on our recent visit to Detroit Zoo a lion was well worth a second look.

The glass enclosure produced a whiskery effect. It was difficult to get a clear shot that was not reflective in one way or another.

If you remember our recent 'Treaured' theme, perhaps he is pondering why the lioness had the best seat in the house.

On reflection perhaps reflective may take on a different approach. How does losing on a slot machine make you look?

For more reflective moods cross over to the links at Carmi's Thematic-photographic-264.

I'm staying in Europe for my stamps on an industrial theme.

From Norway I found  a stamp commemorating the centenary of the handcraft man's society in 1986.


As I started my career in industry at a British steelworks I was pleased to find I had a steelworks stamp - not from Britain though.

There is a watery connection running through my pictures this week for Carmi's 'multiple' theme.


On the Isles of Scilly my multiples have a maritime connection.

Nature has multiples too. the first of which you may have seen before.

Finally it's the turn of a magic basket.

There is even a water connection with this. Dirty clothes dropped into the magic basket magically reappear clean and bright in wardrobes and drawers after being washed, dried and ironed (where necessary).

For more multiple multiples you need to dash away with a smoothing iron to Carmi's Thematic-photographic-263.