I wondered why stamps showing cottages warranted a set of their own in 1970. To me a cottage has always been a place to live.


I discovered that the architectural feature of this cottage is not its size or where it is located; it's all about its weatherproof coating. Lime harling is a thrown or cast-on finish consisting of a slaked lime and coarse aggregate mortar usually with a rough-textured surface. A number of Scottish castles (also places to live) are finished in this way.

Thatching was introduced into Ireland in the 17th century, and subsequently became associated with poverty and despair. Modern building methods have led to its demise.

Charlotte Square is part of Edinburgh's New Town which is a designated UNESCO World Heritage Site.

Bute House in the square houses the HQ of the SNP.

The Rows at Chester are continuous half-timbered galleries forming a second row of shops above those at street level. The Rows are unique and no-one is sure why they were built this way.

Do Charlotte Square and The Rows qualify as places to live?

Check out what others have found at Sunday-Stamps-ii-24.
Posted by Bob Scotney at 10:58 7 comments:

I have a lot to choose from for this 'Royalty' theme. I've shown Queen Victoria stamps before so this time I'll start with George V.

Philympia 1970 keeps up the postage theme and also gives us another look at Victoria.

The three stamps reproduce images of;

I am also spoilt for choice from other countries. Here's a look at royalty in Sweden.

The man who was to become Gustav VI in 1950 was alive when our Queen Victoria was on the throne.

This brings us full circle as their eldest child is Crown Princess Victoria.

For royalty from elsewhere and I suspect more mention of Victoria check out the links at Sunday-Stamps-ii-23.
Posted by Bob Scotney at 09:55 4 comments:

I thought I would have only one stamp to show this week until I visited 'my' market stall.


One of the problems with countries these days is how their names have changed.

French West Africa was once a federation of eight of France's colonies which included French Guinea and Upper Volta.

It's difficult to read, even with a magnifying glass, but the 300f stamp depicts a 'Destroying Angel)


There are four more stamps in the set from Guinée and three more in the Burkina Faso set from 1985.

Meanwhile you may pick more mushrooms at Sunday-Stamps-ii-22

Who/What is a BF? - Sepia Saturday

In these days of social media and texting you have to be careful interpreting abbreviations.

This week's image from Australia quickly reminded me of what BF once meant to me. 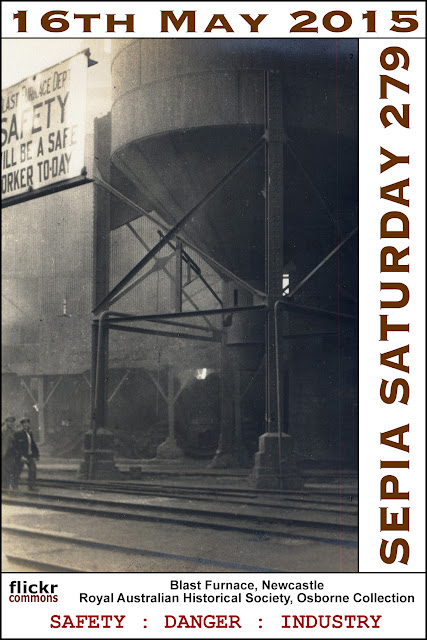 My first job in industry was at the Redbourn works of Richard Thomas & Baldwins integrated iron and steel plant in Scunthorpe, Lincolnshire.

As a graduate trainee I was expected to spend time on projects in each of the different departments. The first of these, in the Blast Furnace Departmet was to prepare trial mixes for the sinter plant that was being constructed. Sinter was to be used as input to the company's blast furnaces to improve their performance.

Iron ore,coke and limestone batches were mixed by hand (shovel) and subjected to heat using a gas-fired box. The resulting sinter was then subjected to a shatter test to determine which mix would stand up best to loads encountered in the blast furnaces themselves.

You could say that my small group often thought they were BFs while carrying out this work for the BF Department.

The prompt photo of the Newcastle Blast Furnace Department doesn't actually show a furnace. It's difficult to make them out in this also. 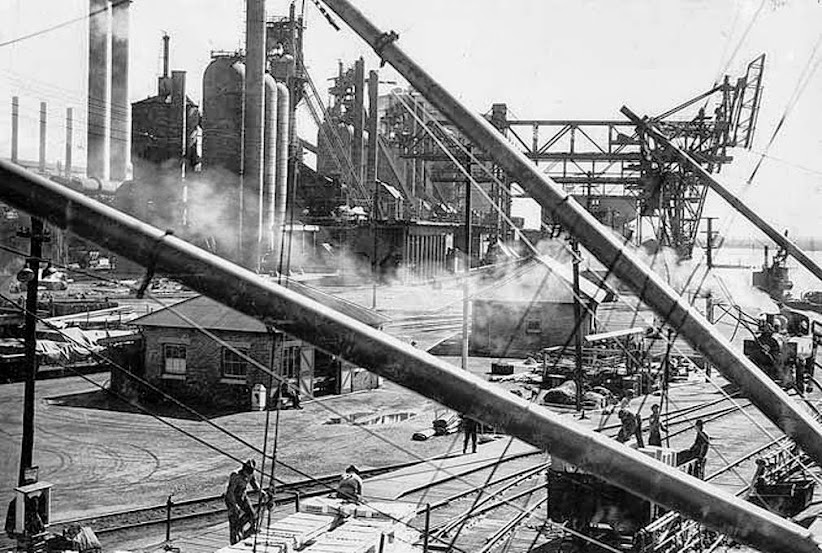 The tops of the furnaces may be seen in the top left centre of the image to the right of what looks like three cylindrical vessels.


A hundred years of ironmaking at Redbourn ended in October 1979 when  the No 2 blast furnace made its last batch of 194.8 tonnes, watched by former production men, engineers and managers from other areas of the Scunthorpe works complex, chiefly Appleby- Frodingham and Normanby Park.


The British Steel closure of Redbourn blast furnaces  was part of a rationalisation plan which included capital investment in the much larger Queen Victoria and Queen Anne furnaces, blown in by the Appleby-Frodingham company in 1954.
These days if I wish to see a blast furnace I don't have far to go to see the one at Redcar near our North-East home.

I left Redbourn in 1969 so never saw the demise of the works.
Finally I have dug out a video on Scunthorpe's Iron and Steel Heritage that shows scenes from the three steel works that existed while I worked there.

Hope you enjoy it as much as I did.
Also don't forget to visit other Sepians at Sepia-Saturday-279.

With the 70th VE Day commemoration this weekend I just had to show some of my favourite stamps.


There was a 3d stamp issued at the same time showing a dove with an olive branch. I have not managed to find one yet.

The Europa, Peace and Freedom theme of 1995 was marked by a set of stamps that included an image of a icon that survived the war unscathed.

The Channel Islands were liberated the day after VE Day in 1945. They issued two stamps on 10 May 1948 commemorating the Third Anniversary of the Liberation , sixty-seven years ago today.

These show seaweed being collected; the designs chosen by the King  are based on drawings by J R R Stobie and E Blampied.

That Europa set included a stamp showing the dove of peace. I recently came across the dove on these four stamps from Germany issued in 1947.

This morning there will be a service of commemoration of the 70th anniversary of VE Day at St Paul's Cathedral attended by the Queen.

To see what others have chosen this week just follow the links at Sunday-Stamps-ii-21.
Posted by Bob Scotney at 09:28 7 comments:

Kicking your heels on a wall - Sepia Saturday

This week's prompt with a damaged picture

made me look for photographs that have been hidden away for years.

During WWII a young girl had her photo taken. This had ghostly stripes where light had crept in. 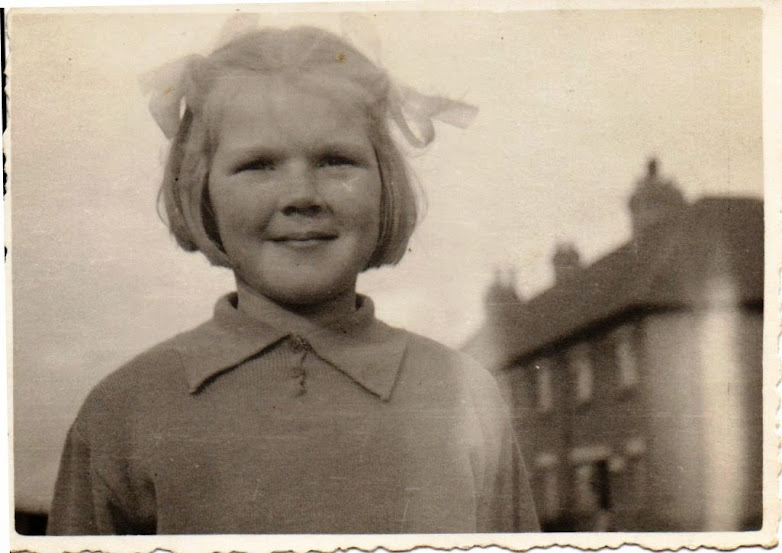 After the war was over our little girl appears again on another shot that we can date to:

But the meaning of the pencil numbers remains a mystery. Which one is our little blond.

She remembers where the picture was taken in Broad Street, Stamford, Lincolnshire - opposite the Central Cinema (definitely not the one known locally as the 'Flea Pit.'

The wall, she says, belonged to this old building,

The hospital was founded in in 1475 by wealthy wool merchant, William Browne, to provide a home and a house of prayer for 12 poor men and 2 poor women.

But there's no sign of the wall the girls were kicking their heels against in that shot or in one from a different angle.

The hospital or Bedehouse was richly endowed with property and agricultural land in the vicinity. A bedesman or beadesman, a name derived from the beads of the rosary, was the title given to the poor men,

Some of the hospital's funds were appropriated by Act of Parliament in in 1871 for the foundation of Stamford High School (where our blond girl was to become a pupil, much later of course) and for the further endowment of Stamford School (where a Sepians was to be educated in the 1940s/1950s)

The blond girl always insisted that the wall in the photo existed and was part of Browne's Hospital.

Now I know it's dangerous to doubt the word of a lady of any age. Francis Firth's photograph of Stamford's Browne's Hospital came to my aid. Copyright does not let me reproduce it.

Please look at the photo displayed by the link. It's taken in 1922 and there on the left is the illusive wall topped by steel railings. In 1947 the railings were no longer there as their metal had been required for the war effort in 1940-1945.

Study Firth's photo a little more and you will see behind the railings a stone urn which matches that in the top right of the picture of the three girls kicking their heels against the wall.

The lady's case is proved. Perhaps this is just as well because she is my wife of 57 years. I couldn't possibly contradict her!

For more stories derived from 'damage' pictures check out Sepia-Saturday-278.
Posted by Bob Scotney at 19:42 18 comments:

My stamps this week come from North Africa and Great Britain.

This Egyptian stamp from 1953 shows and Egyptian soldier in uniform, tin hat and with a rifle on his shoulder.


The Libyan Revolution of 1 September 1969 which led to the overthrow of the Kingdom of Libya (King Idris) was carried out by the Free Officers Movement with the rebel officers led by Colonel Muammer Gaddafi. I'm sure you know what happened to him.

The Royal Mail commemorated the 50th Anniversary of D-Day with a set of five stamps. This is the one I have:

One of the earliest poems I learnt at school began:

William the Conqueror 1066
Said to his captains
I mean to affix
England to Normandy
So go out and borrow
Some bows and some arrows
We're starting tomorrow.

This set was issued in 1966 to commemorate the 900th Anniversary of  the Battle of Hastings.

Can you see where Harold got one in the eye in these battle scenes from the Bayeux Tapestry?

For other bellicose offerings check out the links at Sunday Stamps-ii-20.
Posted by Bob Scotney at 09:04 6 comments:

The Grass is Greener - Good Fences 58

Even during the A-Z Challenge I've managed to find a fence or two.

The first would not prevent this animal from escaping:

While a horse knows where the best grass grows.