As I have just  acquired another two Malawi butterflies were a natural selection when we had a free choice for Viridian's Sunday Stamps this week. 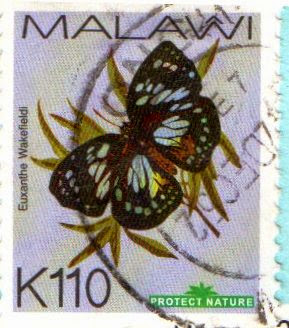 Apparently there are 14 stamps in this set; one such set was recently sold on eBay - but I don't get involved there.

To see others' choices flit over to Sunday-stamps-127.
Posted by Bob Scotney at 09:11 8 comments:

There was one pair of scarecrows that just have to be seen from different angles to see what they are about. 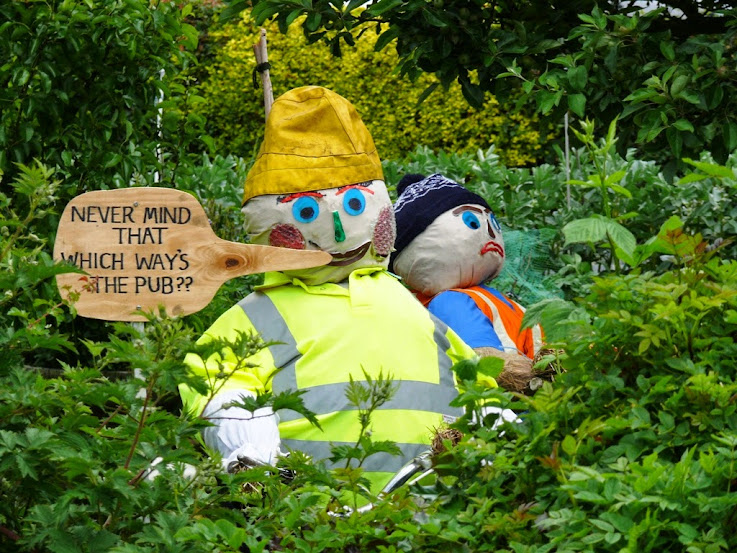 For those of you who feel nostalgic I hope you remember the UK TV series "Last of the Summer Wine" because I have christened them:

Mind you this girl might need some directions to help get back on both legs.
My final group today know how to make themselves comfortable and have decided:

Not being much of a caveman my heart sank when I saw the Wombeyan cave shot chosen as this week's feature. 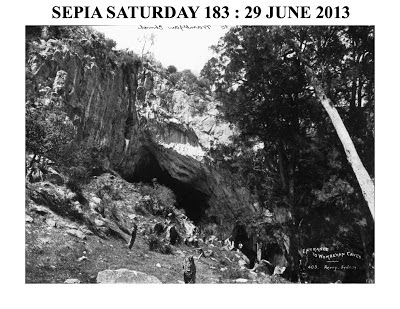 However the local flea market came to my rescue when I found this postcard.

Cheddar Gorge in Somerset is famous for its caves; it's a spectacular place to visit and is a favourite for those hardy souls who spend their time rock climbing

There can’t be much doubt how that cave’s name came about.

A number of the caves have great shows of stalactites and stalagmites.

Some 40,000 years ago the inhabitants were said to have practised cannibalism, yet 200 years ago the Gorge was little known and the track to it had been abandoned following tales of ghostly attacks by beings from the hillside.

Modern ghost busters who spent the night at Cox's Mill nearby reported light anomalies, a sudden feeling of sickness and a face that appeared from the wood panelling around the fireplace.

However if it’s spooks you want, then the place to be in Somerset is undoubted the caves at Wookey Hole.

Human remains, pottery and crude jewellery have provided evidence that the caves were inhabited by Stone Age hunters. 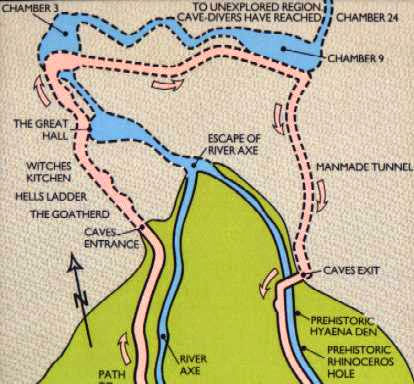 The caves have been formed by millions of years of erosion by the River Axe. Many stalactites and stalagmites have been left behind. One large stalagmite is said to be the Witch of Wookey, turned to stone for her evil deeds.

Supposedly, the witch lived in the caves with a goat and its kid as her familiars; crossed in love she cast spells on the Wookey villagers. A monk sent to the cave by the Abbot of Glastonbury sprinkled her with holy water. She turned to stone where she stands today on the bank of the Axe in Wookey’s Great Cave.

In 1912 excavations in the caves discovered the bones of a Romano-British woman with, nearby, the bones of a goat and kid, a comb, a dagger and a round stalagmite like a witch’s crystal ball. The relics are on show in the Wells and Mendip Museum.

My trips underground have been restricted to the Tube and to old copper mines at Alderley Edge in Cheshire – not haunted, I’m pleased to say.

If you fancy yourself as a speleologist then cross over and follow the links at Sepia-saturday-183.

Scarecrows in the Kirkfest Competition

Here are some more entries in the Kirklevington scarecrow competition. I have had to make up titles for one or two.


However these are a different pair.

I thought I might have to miss this week until I remembered that the local petrol station had recently had a make-over and still looks shiny and new. It's at the Select Shop there that I buy my daily paper.

It was only after I took this shot that the price of unleaded petrol was new that day, down one pence to 131.9p per litre.

Even the newly relaid forecourt is remarkably pristine.
I even found out that the station had just been granted a licence to sell beer in the shop. So much for discouraging drivers to drink.

To see what shiny new things have inspired others just cross over to Carmi's thematic-photographic-249,

In the North Yorkshire village of Kirklevington it's KirkFest Week


If you could read the dates you would know that the event runs from 22 - 30 June, i.e., nine days in all. A number of different events are to be held ending with a 'Kirklevington's Got Talent' competition in the school.

The first event of the week held last Saturday (22 June) was a scarecrow competition where entrants were asked to display scarecrows in their gardens for everyone to admire. Twenty-five residents entered.

I hope you noticed the black 'poo' bag in his hand. This is the dog that lives at the house involved, I have written about her before in my series on North Yorkshire Village dogs here
I succeeded in photographing several of the scarecrows; I will included these in a series of  different posts.

One house had two different ones on show;
and

Look out for the others that are to come later; choose you favourite and see whether you can spot the winner from them all.

The theme this week is "Churches, Castles and Fortifications" and as I wrote about castles in the A-Z Challenge in 2012, it seemed right to go with castles this week as well.


The three castles are:
Thanks to Creative Commons we can see what they look like in their natural surroundings.


To see what others have chosen this week, please cross over to Viridian's sunday-stamps-126.

In the days before milking machines there were many tasks to be performed, even as we can see from this week's prompt a churn being delivered by a man on horseback. 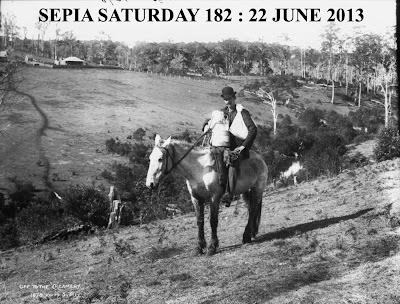 During World War I milk was delivered to your door from churns sometimes carried by women.

If you look closely you can see the hooves of the horse pulling the cart.

This practice continued between the wars; in our village deliveries were made by Mr Capendale, a local farmer. You had to go out to his cart for milk to be ladled into your own container. My elder brother got into trouble for filling one of his churns with stones when he wasn't looking.

Of course before you could use a churn it had to be cleaned as can be seen at a farm in Norfolk during WWII.
Prior to the war in Holland Jewish immigrants were trained to become farmers as you can see on this short video form August 1937..
Training in Gelderland and Overijssel
(Nederlands Instituut voor Beeid en Geluid - CC BY-SA 3.0 NL)

There was no steam cleaning here, just women cleaning milk churns by hand.

For other related posts you need to cross over to Sepia-saturday-182 and follow the links.
Posted by Bob Scotney at 15:18 16 comments:

When I saw Carmi's theme of "Curvaceous" my first thoughts turned to topless beauties and a favourite goddess of mine.

Still on Tresco on the Isles of Scilly it was the curve of the beach that caught my eye, with the solitary figure of my son, totally unaware of the camera's presence.
Nearer home in North Yorkshire I found a harbour empty except for the sea, its curvaceous mouth waiting for ships to arrive.
Even nearer home are the curves I see each week, just some of a total of 43.
To ogle over more curvaceous beauties don't forget to cross over to Carmi's thematic-photographic-248.

It was Yarm Gala today; one of the events was a steam boat parade. There was also the opportunity to take a ride in a steam boat. I missed the first part of the parade but managed to catch up with events a bit with these short video clips,

Boats from the Parade

I thought I had missed Murray play in the tennis at Queens Club but fortunately it was raining there while I was at the Gala.
Posted by Bob Scotney at 18:12 3 comments:

As there is no Sunday Stamps this week I decided I would still show some stamps, those that I received with this Father's Day card.

There is not much baseball played in the UK but even I recognise some of the USA's baseball stars.
There is no link to follow, but Sunday Stamps will return next week.

I have never been a follower of bling although there was a time when I supported a medallion. Fortunately no photos survived the shock. 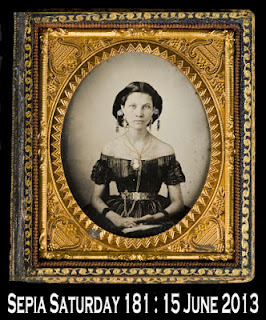 So for this week's  heist I had to raid some jewellery boxes. I'll let you decide whether I got away with it.

The oblong box dates from the late 1800s or early 1900s; I have been unable to trace the jeweller in Halifax, Yorkshire.
My next jeweller at Louth. Lincolnshire has proved equally elusive although I have located a clock and watchmaker of the same name.
Having looked again for William Colbeck, I found him at the Black Bull at 22 Upgate, Louth aged 1, born in 1880. In 1910 there is a newspaper report which I can't access that shows his shop at Market Rasen was burgled. The report in the Stamford Mercury December 16 1910 starts, "The shop of Mr William Colbeck, jeweller of Market Rasen. Nov 9. The shop door had been cut about with a knife and a hole had been cut right through near the lock. An attempt had also been made to remove the glass panel...."

That ring belonged to Amy who you have seen on Sepia Saturday before. The modern box belongs to my wife and contains the birthday present she bought for me this year.
I'm afraid there is nothing interesting to report on Market Cross, jewellers in Yarm. However when you raid jewellery boxes you may find some  unexpected things.
Perhaps she will grow up to believe -

Perhaps I'd better bow out and let you look for other rocks atSepia-saturday-181.

Angus On The Water - Thematic Photography

When Carmi posted 'On The Water' as the theme for this week's thematic photographic I knew exactly what I would show.

My grandson, Angus, is currently in Nicaragua at the ISA Junior World Surfing Championships. He is a member of the GB team for the Under 16 Boys. I have no pictures of him there on the water but have a collection from elsewhere.

You can watch the surfing in Nicaragua live at http://www.isasurf.org/ each day from 3pm UK time (8am Nicaragua). Angus should be on around 9.30pm (UK) tonight.

Meanwhile back in Cornwall things are much more sedate.
For other watery sites or sights please check what others have posted at Thematic-photographic-247.