I have had to resort to the Internet to find some photos linked to this week's prompt, the kitchen on a WWI German hospital train. 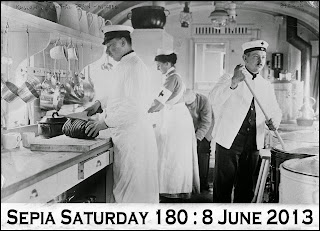 Staying with WWI, I wonder about conditions on this Red Cross Train, no joint of meat for these sick and wounded French soldiers on their way to Paris in 1917.

In WWII the British Medical Services provided medical transport.
Trains like these were manned by both civilian and military crews, whose job it was to ensure safe and speedy travel for the casualties, including enemy wounded. Although damaged and disorganised.. trains played an important part in transporting casualties from hospitals and dressing stations to bases and evacuation areas. Casualties able to walk were given comfortable saloon coaches for the journey.

Sixty-nine years ago today at least one soldier was enjoying a cup of tea,
He must have been going home judging by the smile on his face.

I must say that I am pleased that my experience on trains during my National Service was limited to night trains back to Catterick Camp.

To see what other warlike connections made this week take a trip across to Sepia-Saturday-180,
Posted by Bob Scotney at 19:20

The coffee on the hospital train on June 7 was probably the best coffee ever.

Speaking of trains during the war, I accidentally chanced upon an article about Sir Nicloas Winton and his successful transport of Czech children on eight trains from Prague to London. How I wish I can visit the train stations where those transfers took place.

I saw a typographical error...

Should have been *Sir Nicholas Winton*

The photographer caught that nurse boarding the train at just the right moment. Good action shot! Nice pictures of soldiers' lives depicted at happy & relaxed moments aboard a train somewhere along the way to or from war. Too bad they couldn't have been on a carefree holiday!

69 years, it doesn't seem so long ago. I don't really remember the war, but these pictures were great.

JO ON FOOD, MY TRAVELS AND A SCENT OF CHOCOLATE

That's a BIG step up to the train for the nurse - where are all the chivalrous men to help her up with their coffee?

In WW2 my father-in-law travelled as an enlisted man from Melbourne all the way north to Townsville in Queensland. He and his mates absolutely loved the food and hot drinks provided by the local ladies at train stations all the way.

The old trains had so much character.

I think the photo of the nurse was a set up.....or one of those young men would have been helping her rather than looking at the camera.

The nurse stepping onto the train looks like Mother Teresa...interesting assortment here.

An intriguing collection of images, Bob. I have been researching some pieces on WWI recently but hadn't come across trains in that context so was interested to see these.
Ann

He Looks A Happy Squaddie!

I too vaguely recall a long, tedious train journey after basic training to my posting while doing National Service. I also recall getting off the train en route to visit a girl friend for half a day, and getting into quite some trouble when I arrived at the destination half a day late!

Hi Bob - such an interesting record - fascinating to see .. something I don't usually look at - cheers and doesn't he look happy as you say probably homeward bound ... Hilary

Well your search came up with some great images Bob. I do like the smiling soldier one.

Wonderful images. The last has me thinking back to the John Schlesinger film YANKS.

Fascinating images that fitte4d in so well with the theme of trains and war.