Thursday 14th May saw the official opening event of the Infinity Bridge over the River Tees at Stockton.

The programme of sound, light, big screens and fireworks was spectacular and already videos and photos are on the internet. Why is it called the Infinity Bridge?
When lit up the shape of the bridge and its reflection in the water make up the infinity sign.

Next day as part of the Infinity Spring Festival there was a series of talks entitled ‘Bridge to Bridge’ at Stockton Central Library.
Beth Andrews, River Tees Natural Heritage Officer, traced the development of the river over the last 10,000 years from the last Ice Age to the present day. Teesside has been noted for many years its major chemical plants. Not everyone understood that these are built of land reclaimed since the straightening of the river in the early 19th century.
In a second talk Beth spoke about the bridges over the Tees including the oldest built at Yarm by Bishop Skirlaw in the early 1400s. This bridge widened and repaired still stands and carries the 21st century road traffic.

Yarm Bridge with the railway viaduct behind.
With the advent of the Stockton Darlington Railway and the need to ship coal from the Tees, Stockton was the site for the first railway suspension bridge in the world. Insufficient iron was used in its construction and wooden trestles had to be put in to support the railway with a limit put on the number of trucks on the bridge at one time.
Middlesbrough’s world famous Transporter bridge, first suggested in 1873 was opened on 1911 by Prince Arthur of Connaught. It wasn’t dismantled by that mob from the Tyne in ‘Auf Wiedersehen Pet. ‘The Transporter remains the bridge over the Tees nearest the sea.

Alan Betteney, a local author/historian covered shipbuilding in Stockton and Thornaby including wooden and concrete ships and the part that Stockton-built ships played in the American Civil War.
The construction of the Infinity Bridge was explained by Russell Smith, Regional Director of White, Young, Green. His talk was illustrated by photos from piling of the foundations to the completed bridge.
The final talk was given by Alan Slater, River Manager, British Waterways who spoke about his work on the River Tees before the building of the Tees Barrage in 1995 and the transformation of the river over the years. When he started the river was tidal upstream to Yarm; at low tide the banks were black mud and if you put your hand in the water it would remove your skin. Completion of the Tees Barrage in 1995 limited the Tees' tidal reach, and created upstream a new wetland sports and leisure area for Teesside where you can take part in windsurfing, water-skiing, sailing, rowing, angling - even powerboat racing and white water rafting. The barrage itself is an impressive structure and includes a fish-pass (with viewing area), navigation lock and canoe slalom.

With the industrial pollution cleaned up, the Tees Barrage has seen the water temperature rise by 2 degrees in the last 15 years. Alan Slater says he can watch a kingfisher from his office window. The salmon are back but so are the seals. When the salmon are fitted with pressure and temperature sensors you know they have gone when the temperature recorded reaches 34C, the stomach temperature of the seals. They believe that sixty-six percent of the salmon are taken.

The purity of the water now supports an invasion of mussels and pipefish love the oxygenated water created by water pouring over the barrage gates. A yellow legged gull more normally seen in Spain and Portugal has discovered the existence of the tasty pipefish.

Above the barrage the water is always fresh; coarse fish are no longer swept down stream and lost when the river is in spate.

It had been estimated when the barrage was built that it would be five years before the stocks of coarse fish would recover – in fact, it only took six months. The Tees above the barrage is now a triple A rated fishery.
Posted by Bob Scotney at 09:14 2 comments:

Archaeologist, linguist, mountaineer, soldier, spy, map maker, kingmaker. Not a bad list of accomplishments from a woman born in County Durham in 1868.

Gertrude Bell spoke 16 languages and once survived 53 hours hanging on a rope in a blizzard on a mountain face. She participated in the founding of Iraq, drawing its boundaries and was instrumental in the Hashemite Prince Faisal becoming its first King, although she wrote in one of her letters, "I'll never engage in creating a king again, it's too great a strain."

One of her legacies is the Baghdad Archaeological Museum - the one looted in the battle for Baghdad this century, following the overthrow of Sadaam Hussain.

Gertrude died in Baghdad and rests in the British Cemetery there.
It was said of her, "One of the reasons you stand out is because you are a woman. There's only one Khatun. For a hundred years they'll talk of the Khatun riding by."
{Khatun = lady or gentlewoman}

Ian Stubbs, Assistant Curator of the Dorman Museum in Middlesbrough, in outlining the exhibitions available during his talk at Books and Banter in May used illustrations of the artefacts collected by Gertrude Bell. She was one of the first archaeologists to propose that any treasures found should remain in their country of origin and that only 2% should be removed.

A major exhibit at the museum used to be a lion standing on a zebra which it had killed. These were part of the collection of Sir Alfred Pease. These days the lion remains on show and ‘Leo' has become the icon used to illustrate the different galleries to be seen.

A fascinating part of Ian's presentation was the famous Theodore Roosevelt African safari in 1909 when he stayed at the British East African house of Sir Alfred Pease in what is now Kenya.

Included in the presentation were movies made at the time showing Roosevelt's first lion which weighed 285lbs. Roosevelt's book, African Game Trails, contains his account of how he came to shoot the lion - two shots and a third from close quarters were required. Kermit, Roosevelt's son accompanied on the safari and is also on the film.

One of the movies showed a Ferris wheel made of wood which looked as though it had been put together with 6 inch nails. There were only four carriages and it appeared to be powered by a native pulling on a rope. Nevertheless all the carriages were full and what's' more it, and a second similar wheel, were being enjoyed by the crowd not just those having a ride. 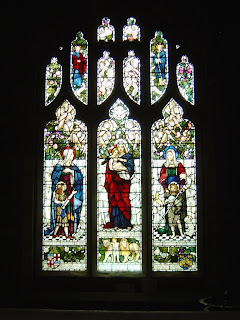 Alfred Pease's wife went on the safari with the men. When she died back in England Pease had a memorial stained glass window installed in Guisborough's St Nicholas Church. A detail in the glass shows Pease's lion - the one that finished up at the Dorman Museum. 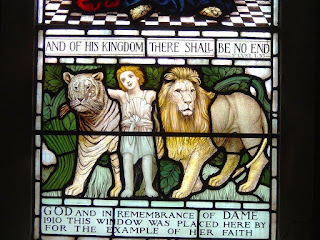 More information on Gertrude Bell is available at: http://www.gerty.ncl.ac.uk under The Gertrude Bell Project. You can read her diaries and some 1600 of her letters and browse 7000 of the photos she took - many of which have never been published.

Details of the Dorman Museum can be found at: http://www.dormanmuseum.co.uk ]
This piece with the photos of The Pease Window was published in the Summer Edition of Guisborough Life.
Posted by Bob Scotney at 15:08 No comments:

Books and Banter sessions are held each week at Stockton Central Library.

Presentations are given by guest speakers, Attendance and the tea/coffee afterwards is free.

I will include summaries of sessions that have interested me; hopefully these will be of interest to others.

Let me know what you think as I post the details.