I had to look hard to find an Easter connection for this week's theme. I decided to stay in the UK with these stamps depicting cathedrals.


These are four from a set of six issued on 28 May 1969 depicting British Architecture (Cathedrals).

They are (clockwise from top left):
We live halfway between Durham and York.

The other two in the set are:
If I was going to show flowers then it just had to be some daffodils.


These are from a set of Spring Wild Flowers issued on 21 March 1979. There is no sign of flowers on our daffodils today.

Why did I choose to show these and not the rest of the set? Well, the Norwegian word for daffodil is
påskelilje, or Easter Lily.

For more Easter connections then cross over to Sunday-Stamps-116.

I have had a interesting time in visiting cafes this week to try and match the photo prompt. 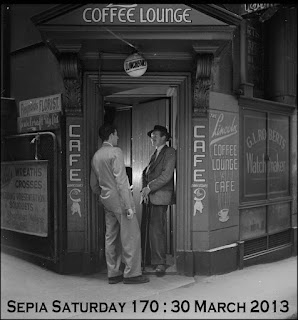 One thing I can say for sure is that, unlike Australia, the cold weather in the North East would not encourage you to lounge about outside. However I did manage to find a:


First stop in Egypt where it was warm enough for there to be some men outside.

If you travelled in style by rail in America you could take your coffee in the lounge.

The combined coffee shop and lounge was part of the 1951 facelift for the train.

Back in the town of Yarm this is the only coffee shop I use; all the other 'branded' establishments take what seems like hours with modern machines to produce a tasteless range of expensive coffees.

No-one braved the cold to sit outside; sorry about the reflections in the windows.

But when I walk the 3 miles back home to get warm I pass that 'Open Cafe' sign at the entrance to the Spring Bank layby between Yarm and Kirlevington. A little detour takes me here:


An ideal place to stop when taking your dog for a walk; of course you have to stand outside.

Meanwhile outside Elliotts someone makes this plea:-

When the skies are grey and full of snow again, it was a delight to see Carmi's prompt - somehow I don't think I will match that.


This fellow has the wrong background if he wants to be inconspicuous.

Ships at war needed camouflage so why did they pick this colour.

You may find different shades of grey (not fifty) in all sorts of places.

Water seems to attract boys even if they have a heart of stone,

Finally an ancient place to meditate on a grey winter's day; I refuse to say it is spring.

Now I suggest that you visit Carmi to stroke his dog and see some other shades of grey at Thematic-photographic-237.

In the Pink - Sunday Stamps

I did not have to look far this week as I had stamps to fit the theme from Great Britain and Norway; there were others but I liked these three best.

From Norway it is women that were commemorated.

My second stamp from Norway shows a flower but its name is hidden by the postmark.

Personally I hate having to stand with a group of photographers when I want to take a shot. This week's prompt reminded me of that.


I worked with British Rail a lot in the 1990s and saw my fair share of trainspotters armed with cameras but none quite like this:

They were out to photograph a special train - a farewell to SNCB/NMBS Class 51 diesel locomotive in 2003.

I have no idea what this lot were doing in Dublin:

I wonder whether they had to wait all night for someone to turn up,

Mind you I'd be happy to join this pair no matter how long I had to wait.

But if it's blossom I want then why go further than our front garden?

I rest my case.

Our best wishes go to Carmi and his family as they slowly recover from their recent lost. We welcome back Carmi's thematic photographic theme and the new 'White' target he has set for us.

With snow forecast for us again this weekend my first shots couldn't be more apt.


Here's the hope of sun to thaw the snow.

Perhaps I'd better hedge my bets a little.

But further up the lane on a day when the snow had gone the old farm house looks fine.

Still further up the lane is this favourite wall. 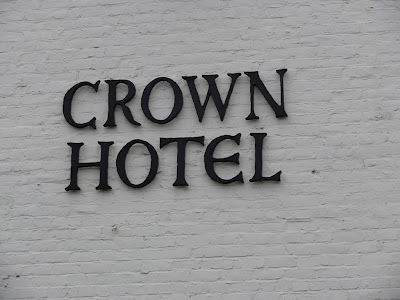 I think that calls for a drink while I make my way across to Thematic-photographic-236. Join us there.
Posted by Bob Scotney at 14:21 10 comments:

It seems appropriate that Viridian chose stamps from Ireland (or green stamps) for the theme on St Patrick's Day.

I shown all my stamps from Eire two years ago but my friendly stallholder came up trumps again with some of their early definitive stamps issued in 1922.

The low value definitives included these:


An Claideam Solius - The Sword of Light or Shining Sword - appears om a number of Irish folklore tales.

The Map of Ireland needs no explanation

Nor does the Celtic Cross on the right.

The four provinces of Ireland  shown on the shield are Leinster (top left), and clockwise, Connacht, Munster and Ulster.
As you can see from the scan these stamps have seen better days so, thanks to wikipedia commons, here is the set of the 12 low value definitives to admire.
For more stamps to make you green with envy, Irish or otherwise, take a look at what others have shared over at Sunday-Stamps-114.
Posted by Bob Scotney at 09:04 9 comments:

Nights at the Round Table - Sepia Saturday

My first thought on seeing this week's prompt of the Round Table at the 1945 Potsdam Conference was of... 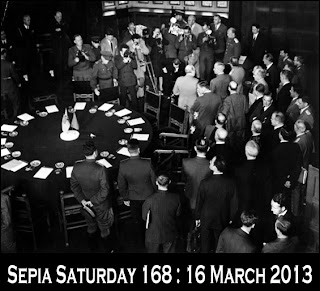 ... King Arthur and his Knights of the Round Table. According to Thomas Mallory's Le Morte D'Arthur Arthur was given the table by King Leodegrance on Arthur's wedding to his daughter Guinevere. Leodegrance had been keeping the table for Uther Pendragon, Arthur's father.

(15th century manuscript of Lancelot and the Holy Grail)


The Round Table has become a symbol for equality and just government.
Geoffrey of Monmouth (1135) made no mention of a Round Table in his history of Arthur.  A French monk Robert Wace, writing around 1155,  was the first to mention it. There are a number of supposed Round Tables sites in Britain including Caerleon, Penrith, Stirling and Winchester.

According to Wace Arthur's knights sat at a round table while Arthur sat on a dais, above the Round Table. The idea here was that the knights were all equal but Arthur was still the king. Wace didn't how many knights sat around the table.

A few years later, an Englishman named Layamon in his chronicle places Arthur's court in London. The Round Table is portrayed the result of a chance meeting between Arthur and a Cornish carpenter, who offers to make for the king a table that could seat 1,600 men and be folded up and taken anywhere.

Robert de Boron tells us Merlin ordered Uther Pendragon to construct the table based on his vision of the Last Supper Table and Joseph of Arimathea's Grail Table. Merlin instructed Uther to have the table accommodate 50 chairs.

The large wooden table in the Great Hall at Winchester dates from no earlier than the thirteenth century, when it may have been made at the command of King Edward III, who was considering a revival of the Round Table as an order of chivalry. In the end, he dropped the idea and created the Order of Garter instead. The oak table is 18 feet across and nearly 3 inches thick. It weighs nearly 1.25 tons.

If you prefer to be in the open air then this is where you should go.

90m in diameter. only one of the original entrances survives. The external bank is 1.5m wide, the internal quarry ditch 9m; two standing stones outside the northern entrance are no longer visible.

Of course it is not only a legendary king that had a round table, nature has its own.

These strange round formations on the rock shore are apparently formed and preserved from erosion by the capping of resistant rocks.

It has been a long time since Arthur's time at the end of the 6th century but today's politicians use the round table format at those 'perennial' G8 Summits.

Certainly they are are a a lot more informal than that Potsdam lot who take your attention away from the 'star' of the show.

I'm told this is at 20-27 St Martin's Court near Leicester Square tube station. However to see where others have been you should weave your way across to Sepia-Saturday-168.
Posted by Bob Scotney at 15:03 24 comments:

When I saw the prompt for this week I knew immediately some shots I wished to post. 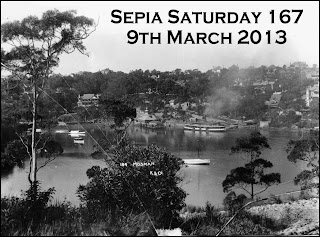 You could argue that my first two pictures are not coastal views, but at least they are from a Yorkshire seaside town.

At least there is writing on the postcard and , I believe Peasholm is a boating lake even if no boats are in sight.

There are boats galore here, and a water chute - the bank on the right has seats to view acts at the open air theatre opposite. It looks a lot different today I'm told.

Fowey on the south coast of Cornwall is one of my favourite places to visit.

And if you look across the estuary in the other direction this is what you see.

But I've had to go to Stavanger in Norway for a shot of a ship of any size.

The Queen and Prince Philip were on board. I was working at Rosenberg Verft at the time.

On that royal note I'll leave you to check out other voyages and tales at Sepia-Saturday-167.

This year is the 200th anniversary of the publication of Jane Austen's "Pride and Prejudice" and to celebrate the Royal Mail issued this set of stamps on 21 February 2013.

You may find other surprises posted this week as Viridian gave us a free choice this week in Sunday-stamps-112.
Posted by Bob Scotney at 10:21 11 comments: