The Yorkshire Town of Yarm

A-Z Challenge – ‘Y’
When we moved to Yarm in 1970, the town was said to be in Teesside. Since then it has been in Cleveland (which is still the quoted postal address) and latterly in the unitary Borough of Stockton-on-Tees. Despite these administrative changes I have never forgotten what a resident said when we first arrived, “None of this Teesside nonsense, lad. We’re in Yorkshire! Don’t you forget it!”
I wrote about the bridge at Yarm under the letter B, and the  Valiant Dragoon,  Yarm Fair, 300th Anniversary of Yarm Town Hall and  Yarm Writers Group last year.
I ought to tell you about the Castle, but as you can see you will not need a guide to show you round. 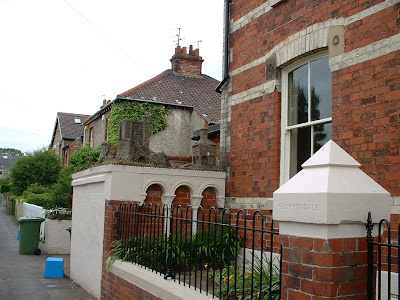 The railway viaduct is on a different scale and can hardly be missed. 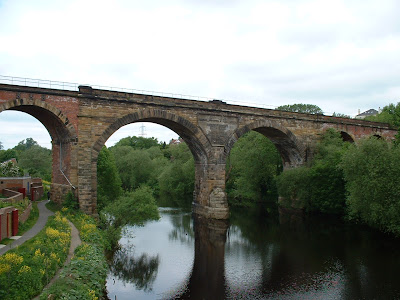 The viaduct is nearly half a mile long; its 43 arches span the town and the River Tees, over seven and a half million bricks were used. Designed by Thomas Grainger and John Bourne of Edinburgh the viaduct was opened in 1852 to extend the Leeds and Thirsk Railway from Northallerton to Stockton and Hartlepool.
The cobbled areas on either side of the road are a feature of the Georgian High Street; the cobble areas are now used for disc controlled car parking. Even so through traffic still disrupts passage through the town. The High Street was voted best in Britain in a BBC poll in 2007. 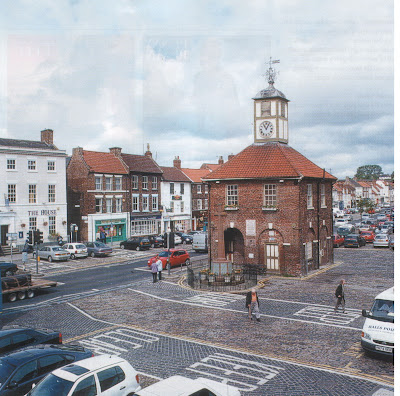 The Dutch style Town Hall built in 1710 stands at the centre of the High Street which once boasted 16 inns. The Ketton Ox named after a famous shorthorn bull bred near Darlington was at one time noted for cockfighting. In 1820 the George and Dragon was the site of the meeting at which a decision was made to build the Stockton and Darlington Railway. The Cleveland Bay across the Tees in Eaglescliffe commemorates the well known breed of horse which originated in the hills east of Yarm.
Posted by Bob Scotney at 07:24

That's a very petite town hall. Is it like the tardis, bigger on the inside?

Beautiful town, Bob. The castle is exquisite on the outside and probably even more so on the inside.

We have a castle here in NC close to where I live. The Biltmore Estate. I love to walk the halls and imagine what it must have been like to live there. Or go down into the kitchen/servants quarters and imagine them as they worked and listen to what the walls have to say.

Great Y post. Yarm is a place I'd love to visit one day.

What a town to visit...thanks this was especially a treat for me....very awesome post!

So great! We have a church up the road from us that has just the belltower alongside it. Reminds me of this small square. I love reading about these places. No ticket needed, perfect tour guide :)