The River Aln skirts the northern side of the town of Alnwick in Northumberland, The remains of Alnwick Abbey with its well preserved 14th century gatehouse is situated within Hulne Park on the river’s bank.
In the town the church of St Michael has Saxon origins but was rebuilt in the 14th and 15th centuries; the church has a battlemented tower with some of the finest 15th century workmanship in the country. In addition to fine monuments inside, the church houses a carved 14th century Flemish chest. 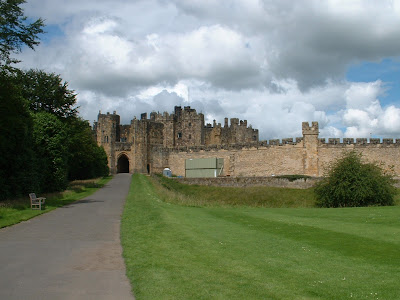 But it is the castle that has dominated the life and times of Alnwick. The first parts of Alnwick Castle were erected in c1096 by Yves de Vescy, Baron of Alnwick. Its purpose was to protect England’s northern border against the Scots and the border reivers. In 1309 the castle was bought by Henry de Percy, 1st Baron Percy. It has been owned by the Percy family, the Earls and the later Dukes of Northumberland ever since.
The eldest son of the 1st Earl of Northumberland was also called Harry Hotspur. The nickname, Hotspur’ is suggestive of his impulsive behaviour. Sir Henry Percy, or Harry Hotspur, acquired a great reputation as a warrior fighting against the Scots and the French in the late 1300s. He helped depose Richard II in favour of Henry of Bolingbroke, who later became King Henry IV.
He led a rebellion against Henry in 1403; but before he could join forces with the Welsh rebel, Owain Glyndŵr, Hotspur was defeated and killed at the Battle of Shrewsbury. His body was displayed at Shrewsbury, impaled on a spear before being quartered and sent around England, his head exhibited on a pole at the gates of York.
Hotspur has famous lines in Shakespeare’s Henry IV, Part I in which he is killed by Prince Hal (the future Henry V) – immediately after being stabbed he says, “O Harry, thou has robb’d me of my youth!” A later line is cut off in mid sentence by his death, “O Percy, thou art dust and food for -” and finished by Prince Hal: “For worms, brave Percy.”
In August 2010 a bronze statue of Harry was unveiled in the town of Alnwick. The statue commemorated the 700 year anniversary (in 2009) of the Percy family in Alnwick. There is an earlier statue of Harry Hotspur inside the courtyard of Alnwick Castle. 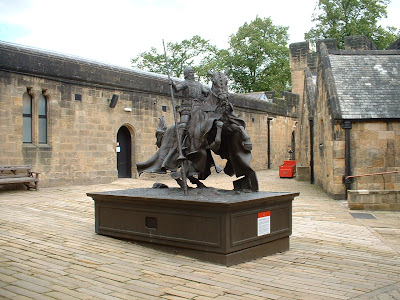 Since WWII parts of the castle have been used first as a High School for Girls, then as a teacher training college and since 1981 as a branch campus by the American St Cloud State University.
The Postern Tower houses an exhibition featuring the family’s interest in archaeology with frescoes from Pompeii and relics from Ancient Egypt. The Constable Tower contains military displays and the Abbot’s Tower the Regimental Museum of the Royal Northumberland Fusiliers.
Today the castle is the second largest inhabited castle in England. Only Windsor is larger. Much of the castle is open to the public. There has been increased public interest after it was used in shots for the exterior and interior of Hogwarts in the Harry Potter films and for the famous quidditch sequences.
The present Duchess of Northumberland has initiated the establishment of The Alnwick Garden, a formal garden set round a cascading fountain. 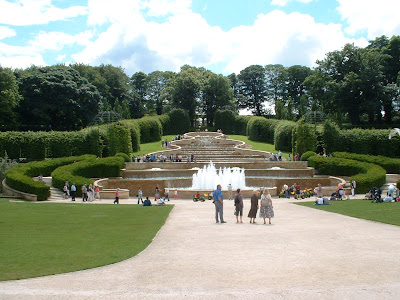 The large ‘tree house’ complex includes a café; the poison garden grows plants such as cannabis and the opium poppy. The pavilion and visitor centre can hold up to 1000 people. 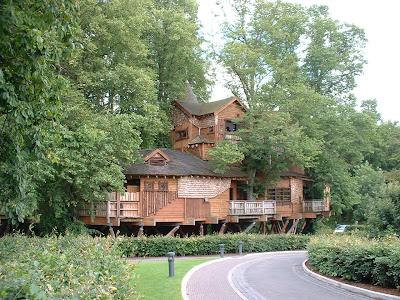 In the town is the prominent Tenantry Column topped by the Percy Lion, the symbol of the Percy Family. The column was erected in 1816 by the tenants to the second Duke of Northumberland after he had reduced their rents in an agricultural depression. 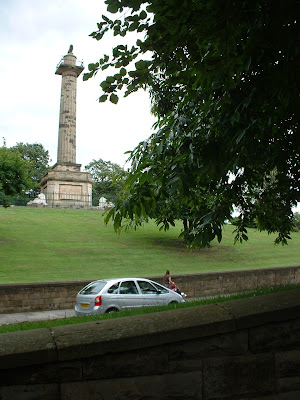 I've been past and through Alnwick many times, Bob, but usually at the wheel of a truck. I really must stop off sometime and take a look around.

Here in America, we think a building is OLD if it is 100 years old. I really enjoyed this post - I wish we had castles dotting the countryside. (by the way, elk shed thier horns - so not too many elk lost their lives - thanks for commenting on my post)

I'm from Canada and if I'm ever fortunate enough to travel you way I'll definitely visit Alnwick. You've made it sound so interesting and the photos are amazing.
Found you from the A-Z Challenge, it sounds like it’s going to be a lot of fun, with maybe with a little bit of stress thrown in!! I’m now following you on GFC and I hope you have a chance to check out my blog!
Monica
http://oldermommystillyummy.blogspot.com/

A is for adore! Thank you for sharing Alnwick!

Whoa! These are great pics. Lots of inspiration here.
Don't let us jade you about awards. Some of us have been bugging each other so long we forget others might not get it.

What a beautiful place. And what a wonderful way to start your challenge. Now following. Shelly

Awesome pictures for A - must be wonderful to escape into deep history within driving distance!
Happy A Day!

Wow. Thank you for the pictures and the post. Everything is so old! Wouldn't it be neat to go to school there? I appreciate all the details that you put in here for us to learn from.