My stamps this weeks cover men and countries where there has been turmoil in my lifetime. 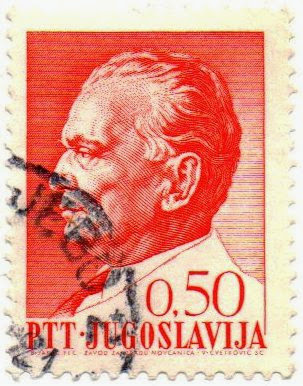 After the 1914-18 war Croatia, Montenegro, Serbia and Slovenia became the Kingdom of Yugoslavia. Following the German occupation (1941-45) the country became a republic with Tito as its president. In 1963 he became president for life - he died in 1980, but the disintegration of Yugoslavia had begun in 1974.


Mohammed Reza Pahlavi was Shah (King) of Iran from 16 September 1941 until he was overthrown by the Iranian Revolution on 11 February 1979.

A president in office for an even shorter time was the man who won the Nobel Peace Prize in 1990.

Gorbachev was the first President of the Soviet Union until its dissolution on December 25, 1991.

For more Presidents, Kings - and - Queens cross over to Viridian's Sunday-stamps-129.

Gorbachev's presidency did't work out very fine for him.

I always like Gorbachev - seemed such a nice guy compared with many previous leaders.

wow! you have quite a collection here.Now,I feel a lot younger bec the only prez I heard of from your post is Gorbachev. :)
If you want stamps from the Philippines, please email me your address and will send you a postcard with lots of Phils stamps. :)
my email is
willastock@yahoo.ca

An interesting selection, I like that there is so much history to be found on stamps. I don't think I have seen Gorbachev on a stamp.

I remember seeing Gorbachev on TV when he visited Minneapolis in 1990.

Postcardy: I was in the San francisco area when he and his wife visited there, probably on the same trip. I did not see him in person of course. the end of the USSR was tumultous, wasn't it?
thank you Bob, for sharing these stamps of various leaders.

ohoh there is a face i know very well! i wouldnt have said that the disintegration of yugoslavia begun in 1974...i was a happy pioneer in 1983 ;)

The Shah looks very western with his tie, does he not?!

A wonderful collection of stamps.

Are these stamps you own? They are quite impressive!