A Plague of Plaques - Sepia Saturday

My local town of  Yarm has a plethora of plaques, just right for the challenge Marilyn has set us for this week with this plaque of Pasteur treating a boy with a rabies.vaccine. 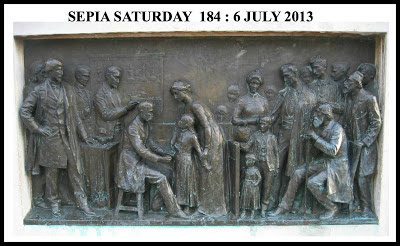 You may have seen a number of the photos in the post but not all at once.

Taking a tour of the town along West Street, travelling north, the first blue plaque you see is one on a building wall.


A modern photo but as you can surmise the building is much older, even though now it has been turned into flats.

Further down the street you come to an older site.

And the house itself dwarfed by the arches.

Across on the opposite is the church yard with this plaque on the wall.

When we moved to Yarm in the 1970s my elder son was to attend Yarm Grammar School in another part of the town which had replaced the one demolished. By the time my younger son reached the age to attend. The PC brigade had had the Yarm Grammar closed and replaced by a comprehensive school - named Conyers. Later Yarm Independent School took over the Old Grammar School and built new premises in the grounds of a former engineering firm's headquarters, which further back had once been a friarage. My daughter became one of the first six girls to attend Yarm School in the Sixth Form.

I've mentioned the viaduct already and you will have noticed it in both the Hauxwell and Hope House shots. The viaduct has a plaque of its own.

At the left of the picture you can also see a bridge crossing the River Tees - it has a plaque of its own.

And the bridge brickwork itself -

I could go on but it's time for a drink and where better to stop than at the:

It has some plaques, of course.

Unfortunately you cannot catch a train or a coach to take you to other venues on Sepia-Saturday-184.

Jeez -- we think that a building from 1640 in Boston is old -- you guys have REALLY old stuff! I'm assuming that a Blue Placque is historical....right? That aquaduct is amazing...good post!

Love how all plaques led you to the pub!
That viaduct is amazing.

Full of old places and yet before I 'met' you I had never heard of Yarm. Is the viaduct still in use? I like the George and Dragon, make mine a scotch please.

That would be quite something to have the train going by right over your head. There are lots of plaques around Atlanta about battles during the Civil War. Nothing as old as yours are.

Nice to see so many very old buildings surviving in Yarm. I particularly like the charming Hope House, but the railway viaduct is very impressive.

Any idea what the magnet on the George & Dragon's sign means? A photographer in nineteenth century Leicester called his business the Magnet Studio, with a similar logo on his cartes de visite, and I've always wondered why. Was there some significance in Victorian times, perhaps?

Brett - The magnet is the trade mark for John Smiths Brewery adopted in 1911. They have (had?)a range of beer called Magnet Ales and sponsor a horse race formerly called the Magnet Cup. See http://en.wikipedia.org/wiki/John_Smith's_Brewery

Jo - the railway viaduct is still in use for goods and passenger trains linking Newcastle and York. Yarm has its own station to the southern end of the viaduct.

Thanks Bob - no connection to the Magent Studio then.

I thoroughly enjoyed the stroll down West Street! What a lovely town and fine old buildings.

I like how they remember the spot, even when the original building has been destroyed.

Thanks for the wonderful tour, Bob.

A grand tour and exactly on theme, Bob. The Yarm viaduct begs for the Marx Brothers' "Why a Duck?" skit. And I now have an image of Bishop Skirlaw with his vestments rolled up, wielding a trowel.

A fascinating local history which without the plaques could so easily be lost. I liked your title - I always go for alliteration!

I was hoping someone would go down this route, and you haven't disappointed with this string of blue plaques.

The Viaduct looks awfully close to the Hope House. I would probably lose my place if I tried to count the arches--their certainly are a lot of them.

Yes, I do recall some of these, but I could see them again and again. They are quite lovely, and it's always a treat to see a bit of your country as well!

Loved the tour of Yarm. I dinna even know where Yarm was located, but with Google Maps I not only found Yarm, but also could follow along with your tour. However, I did get sidetracked with the True Lovers Walk.

Indeed so many plaques. My favorite is the one with the cobweb. Very charming. Nice collection.

A friend from England, who upon returning home from a trip to Los Angeles, wrote to say that after seeing LA she really did understand how much England looked like beautiful movie sets.

It's always so hard to imagine such old buildings when you live in California. A structure that goes back to the mid-19th century gets a plaque around here.

I'm always jealous of the history of England. Our U.S. history is so new. It's hard to even conceive of a house from the 1400s still being around.
That aqueduct is so amazing.
Nancy

I'm glad the town thought enough of the buildings to put plaques on them. It makes a good guide for a walking tour.