The problem with my researching British rivers is that it is easy to be sidetracked and this has happened immediately with both the Aire and the River Axe.

The river rises at Malham Tarn in North Yorkshire, and drains the central  Pennines to flow south-east through West Yorkshire until it joins the River Ouse. Its upper reaches are in the valley of Airedale - where the Airedale terrier originated.

After leaving the Pennines it crosses the Yorkshire coal field to be joined by its major tributary, the River Calder. Leeds is the principal city on its route.

The River Axe gets its name from an ancient Celtic word meaning 'abounding in fish.' I thought I knew where the river was located but now I've found there are two rivers with that name located in the South West.

One rises or rather emerges from the limestone caves at Wookey Hole.

This flows westward and northward through Somerset, splitting into two Axes before reuniting and entering the Bristol Channel at Weston Bay.

My other Axe flows south and enters the sea on the south coast at Lyme Bay. 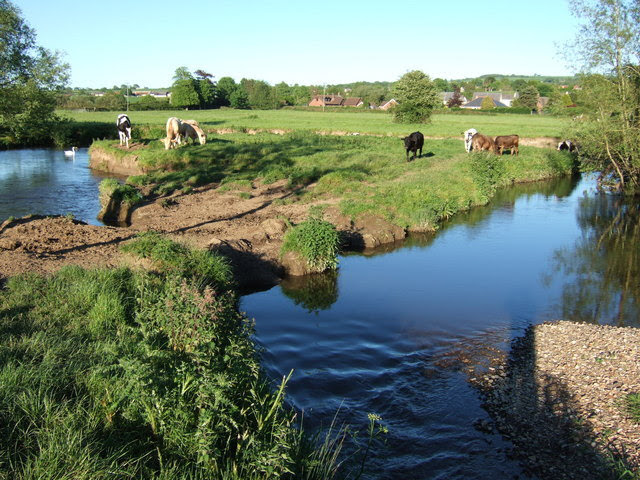 The river rises in Dorset but passes through Somerset and Devon. The photo taken in 2007 shows cattle standing within a meander likely to have become an island by now as the river eroded the neck. The houses are at the northern end of the town of Axminster (famous for its carpets).

I'm really up on English geography, I don't think. Was unfamiliar with the Aire and the Axes (bet they ain't full of fish today) although of course the towns on these rivers are familiar to me.

These appear to be very peaceful rivers, although that Wooky Hole looks rather mysterious and in need of a scary legend.

The river with the cattle standing in the water and on the bank, reminds me of a picture in a book I had when I was little - "Scuffy The Tugboat" about a toy tugboat that escapes from his boy and goes along the every enlarging river until it gets to the sea and just there, the boy and his father are are waiting to scoop the thankful tugboat up.

Wonderful photos...looking forward to the rest of the letters.

Donna B. McNicol|Author and Traveler
A to Z Flash Fiction Stories|A to Z of Goldendoodles

Thank you. I've always been confused by the Somerset Axe, knowing the Dorset/Devon one much better!

Jemima, blogging from A to Z on my writing inspirations

I had considered doing an A-Z on rivers, as I have spent much of my life exploring them, but April was too busy. Glad you see that you tackled the topic. Although I am posting from my long term blog, I am mostly blogging at www.thepulpitandthepen.com these days