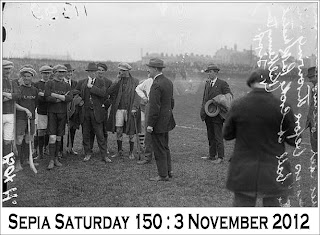 The photo Kat has given us as this week's prompt  shows the Irish Revolutionary Leader, Michael Collins, at the Senior Hurling Championship match against Dublin on September 12, 1921.

However I am starting this week in Cape Two with a photo of a pump from which slaves used to collect water.

When you take a closer look you can see the pump's lion mask.
(By Raymond Ellis - CCO 1.0 public domain dedication)

When I was at university in Scotland I tried my hand at shinty, a similar game to hurling, - but only once. The goalie in this video could have done with that lion mask from the Hurling Pump.

Back it Ireland there is no doubt about how seriously they take their game of hurling - just look at the memorials that are erected.

But there is another form of hurling where a silver ball is thrown. In Cornwall hurling the silver ball is still practised at St Colomb Major (twice a year), St Ives (annually) and Bodmin (every five years).

You can read about Cornish hurling here


Youtube has many videos of hurling matches in Ireland (and some in the USA) and of Cornish hurling. If you get sidetracked there don't forget to visit other posts linked to Sepia-saturday-150
Posted by Bob Scotney at 15:44

I knew you'd find a clever twist on this - I bet no-one else has a fountain! I had never heard of Cornish Hurling, but I'm not surprised, given all the other 'mob' games they go in for!

Nice lesson in all forms of hurling, Bob. I think Shinty and Hurling are two of the oddest sports out there. Must have developed from those Chieftains carrying around their big sticks, eh?

And when they started dragging them on the ground, they discovered GOLF. Right?

I could use subtitles on that YouTube, but I think I got the gist. I bet that was one baaaaad headache!

I was surprised to the goalie remain on his feet. That ball, if that is the proper name, must have traveled at at least at 100 miles/hr.!
And it was nice to see there are still Dutch street names in Cape Town: Zorgvliet. A.o. that is the name of an old estate near The Hague. And Bob, you may have been there during your visits to Shell The Hague.
Thanks for telling me about hurling.

A superb match for the theme, Bob. There seems to be no end to games with sticks and small balls. I wonder if many players crossed over to play one of the other variations.

Hurling does not exist in my area. But maybe it does, not in the farmland of Iowa. I guess I have seen it on tv and maybe in New York. Interesting places you have taken us for a visit.

The players in those games should wear helmets!

Funny I thought one one more us of the word hurling, but maybe less appropriate.

I also thought about quidditch.

Learning a lot obout "hurling" this Sepia week, which I'd previously never heard of. I was intrigued by that iron mask. And that hurling ball looks very dangerous!

One wouldn't want to get beaned by one of those silver balls, although it would be a classy way to go! The mask is intriguing.

That must have hurt a lot! I guess they don't use silver balls in playing shinty. I like the rules that you are allowed to use both sides of the stick, and that the stick may be used to tackle. How many times I wished to to that when playing field hockey ...

You rock Bob- Some how I just knew you'd do sports something- and of course with a twist- love the hurling (and story) shiny ball!

Ouch! That guy took one for the team! That little gold ball does look like a snitch.

Oh wow! That poor goalie! Yes, I think he very well could have used a protective mask. Quite the dangerous game isn't it?

That gold ball reminds me of the sport in Harry Potter. Of course with my dragging memory I will not think of what it was called until after I hit the publish button. Decided to go look it up in the book. Quidditch was the game and the Golden Snitch was the little golden ball. Made me want to read them all again.
QMM

Lavender and Vanilla Friends of the Gardens said...

This clever theme about hurling attracts a diversity of posts. Yours taught and showed some very interesting facts.

I had to look twice to see how the ball hit the goalie. A miracle that he could standup right.

I never heard of the sport of hurling until this week's prompt, Bob, and now I've learned even more about other hurlings!

I knew there was some sort of game called hurling, but had no idea what it was. I'm assuming the last image of the silver ball is an award and not an actual ball. I mean, hurling to me is something that's done by young man who have managed to never get past being 12 and have had too much to drink. Nice to know there is an alternative meaning.

I have obviously caused some confusion. Yje Truro bsll is one used for Cornish hurling and is not the same as that used in Ireland and elsewhere with sticks.

The lion mask is magnificent!

I've learned a lot this week - I have to admit that before this week's Sepia Saturday I had never heard of hurling but then I am not a big sports person to start with.