For the commemorative theme this week I went looking for oldest anniversary issue I could find. I came up with two 900th anniversary stamps


This was issued on 28 February 1966, one of two commemorative stamps. The other which I have never seen other than as a facsimile was for 2 shillings and six pence.

My second stamp was one of a set of eight issued on 14 October 1966; again I only have the one.

Six of the set had 4d denominations and there was one at 6d and one at 1s 3d.

As regular visitors to my Sunday Stamps will know I have a pet market stall holder. This week I thought I had struck gold when I found a set of postcards. 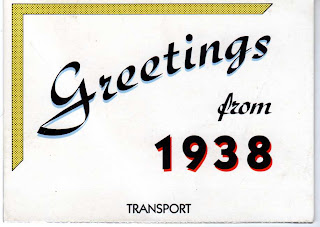 Four postcards were attached to this commemorating events  by boat, plane, tram and train in 1938.


The reverse carried a date stamp of 6 July 1938 at a place called Essendine - a station on the Mallard's route and a place near to my boyhood home.

It wasn't until I had carried my 'treasure' home that I realised this stamp and those on the other cards were not real. They were all prints of Great Britain Europa stamps issued in 1988!

Nevertheless I did not feel I'd been robbed as the whole lot cost me 50p.

I liked those Europa stamps but don't have the set so a print would be OK and yes a bargain at 50p just for the picture of Mallard. The last line of the postcard message (they went in a perisher for it) has me puzzled

I'm confused as well, Joy. I've spent 3 days trying to work out what that perisher was.

The postcard set is an interesting find.

Love that Mallard train card and stamp! well, for 50p it is more than a great deal :)

I loved the Battle of Hastings stamp. Always been a favourite piece of history for me. I used to "do" the Marriott Edgar poem Battle of Hastings years ago. Still got the book. 1938 was special to me, I first saw the light of day.

They went in a perisher for it, not sure who "they" were, but it surely means it was an extremely cold day for doing the run.

Amazing Bob- I like your title too! But I must say the train is just stupendous and what a fun trip that would be!

Perishing cold? Maybe, if he was watching from the waiting room.

I was thinking of weather, too, for perisher. Maybe rain?
finding two 900 y/o commemorative stamps is pretty good.

Great stamps - esp. of Hastings. The market stall person must be happy for Sunday Stamps!
Thank you for participating!

Interesting, Bob, I have a great collection of Christmas stamps dating way back. I'll look them out and see what I can come up with of interest.

(and i love OLD postcards!! with or without stamps!)

I love the postcard set!!

I have the first day cover for the Battle of Hastings stamps as my father used to collect stamps.
Must admit the "perisher" made me think of perishing cold as we always described a day as a perisher at home. Note the event took place in July though. Could try the On This Day site. Have you tried the Met. Office site? They answered a query for me in great detail earlier this year.