Alan's photo this week shows two young girls who I assumed were sisters until I saw their names. 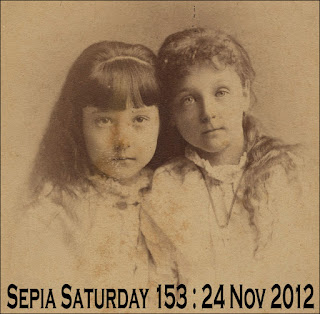 So my apologies to Lala Williams and Elgie Crook but "sisters" will be my theme; not two but three.

Three sisters that have stood the test of time are these in New South Wales, Australia.

I thought of including the Scissor Sisters too, until I found out there are more than three of them and only one (I think) is a woman. I settled for LaVerne, Patty and Maxene instead but felt a bit sheepish when this photo turned up.

Somehow I don't think they would have been in such close harmony as LaVerne, Patty and Maxene.

Accompanied by Harry James and his Music Makers, singing "Don't Sit Under the Apple Tree (With Anyone Else but Me") in the 1942 film Private Buckaroo.
(Universal Pictures Company)

Appropriately enough one of their songs with Harry James was this:

However I'm told that sisters don't always get along with one another and may even come to blows.

As I don't have any sisters I can't vouch for this, but I do remember George Clooney's aunt.

Now you've seen the trouble Lala and Elgie have landed me in, it's time for you to step across and check out where others went at Sepia Saturday 153
Posted by Bob Scotney at 15:34

Okay, so I don't think those hats on the top three girls are big enough! Anyone with me on this?

I love Clooney (Rosemary, NOT George!) and know all the words to this song. I nearly used a bit from it as my title this week, in fact.

Oh my! I can see the sisters bit including the version done by Rosemary Clooney will be a popular take this week! I love that song!

Not having any sisters I now see what I have missed :) A.o. a punch in the nose...
I enjoyed your post!

Two points came to mind when I saw the theme - my mother and aunt (two very close sisters) and also the British singing trio the Beverley Sisters with their song "Sisters". I enjoyed your interpretation of the theme, especially the lambs. My favourite photograph the three Russian sisters in such magnificent hats.

I'm feeling a little sheepish like ewe. The mother with her baby lambs is my favorite.

They're all great sisters, Bob! Rosemary Clooney is a winner, indeed; ditto sheep sisters...all in all, I'm with Jinksy: the boxing sisters are tremendous!

I was going to say this was a very harmonious post Bob but the Boxing Babes brought a note of discord. An enjoyable collection.

A goood take on the prompt, goats and mountains, but my top pick has to be the boxers. I never thought that was such an old sport for women! Great songs too.

Are the three sisters at the top leaning to make room for their overly large hats? Enjoyed all your trios. I love old music, so especially enjoyed The Andrews Sisters and Rosemary Clooney. In fact, I've had the song Sisters in my head all week because of this prompt!

Sisters or not your idea for the theme for you this week, totally rocks. Great videos, cool photos especially the boxers and just an all around good feel to it Bob!

Awesome post! I too went with the "sisters" theme for today's SS, and have been finding myself singing the "Sisters" song by Rosemary Clooney during the week.

i didn't know Rosemary and George were related.

Another fine spin around the theme, Bob. Would it have been the same for two brothers? I think sisters have many more references than brothers.

Lots of interesting sisters here! I could have used some boxing sisters for my post, I think. Since I have a great sister myself, I always sing along with Rosemary Clooney and Vera Ellen (although she didn't do her own singing). Another good sister song that we sing is "Miss Celie's Blues" from "The Color Purple."

LOL! I love it when you do these one thing leads to another posts, Bob. Great selection of pictures and videos; you have brightened my morning.

what a highly entertaining post. I hadn't heard either of the two songs. Must have passed me by. But I love Rosemary Clooney. What a voice.
All in all, a great post.
Nancy

An interesting variety of takes on the subject! I'd keep away from those Bennett girls though :-) Jo

Loving the 3 little lambs.
The Andrew Sisters were some of my mom's favorites.
;)~
HUGZ