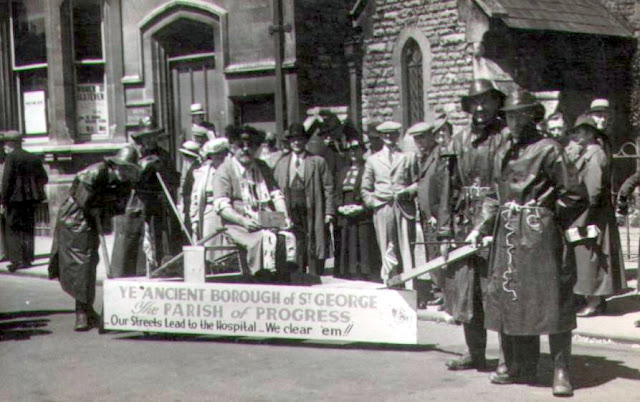 Bob is the man on the right with the string hanging down from his belt.
This picture was taken at an event (date unknown) in Broad Street, Stamford, Lincolnshire. I have sent this picture to the editor of the Stamford Mercury in the hope that his staff can identify the event, its date, and the people in the picture. I would love to know the identity of the gentleman in the 'ceremonial' robe.


The Rutland & Stamford Mercury is a weekly tabloid newspaper based in Stamford and sold across South Lincolnshire and Rutland. It was established in 1695 and claims to be the oldest newspaper in Britain (although Berrows Worcester Herald claims to predate it by five years).
The Mercury appears in three editions: one for Stamford and the Deepings, one for Rutland, and one for Bourne. All of them come out on Fridays. When I left Stamford in 1960the Mercury was a broadsheet.

Well, it's hard to tell under the shadow of that hat. In any case, he and his friends obviously had a sense of humor. I'd love to hear what the event was.

I'm still waiting to hear from the Mercury.

Stamford Mercury is to publish the photo, probably this Friday, in their Memories slot and will ask if readers can identify the event and the people involved.