When you meet these two Irish Setters it’s difficult to tell which one is Cameron and which is Duncan. Stroke them and talk to them and you will find out that both are friendly, but it’s Duncan that will lean his full weight against your leg in the hope of more attention. Cameron meanwhile is watching what is going on around him. 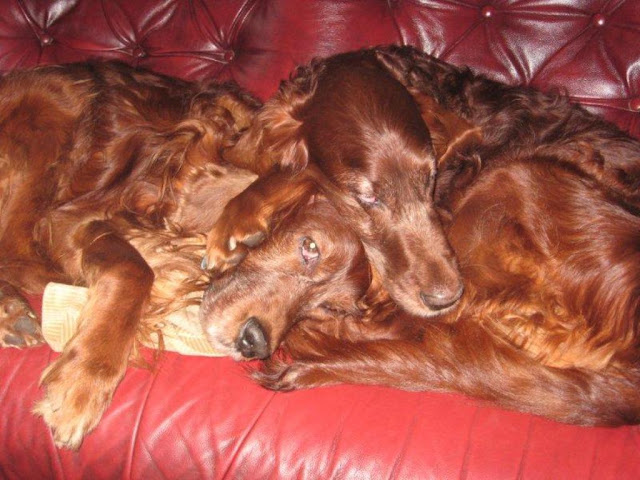 What the Irish Setters are doing with Scottish names we will never know. Duncan and Cameron came to the village from the Irish Setter Rescue at Lavenham in Suffolk via kennels at Huntingford Grey in Cambridgeshire when they were 9 and 8 years old. One of the conditions in their loan for life was that they were homed together. Also their names could not be changed.
Details of their pedigree are not known. Their original lady owner died after which her working daughter looked after them for 2 to 3 years before they went to the Rescue centre. Cameron, now 9, and Duncan, 10, have made themselves at home in the village in a house ruled by five cats.
When they arrived it took a while to find a brand of biscuits they would eat. It took a year to get them to eat chews and biscuits; eventually they settled on the Purina Beta dried brand. However once they started they became quite good at it and now eat a selection of biscuits and chews every night. Duncan also likes apple cores.
Neither is greatly interested in toys and games, not even in balls. Cameron will throw his squeaky chicken around occasionally. Duncan is a digger and favours the back of the compost bin although no-one’s quite sure what he is digging for. Cameron, for ever the opportunist, takes every chance to sneak off and snuggle down on the bed of the daughter of the house.
There is no doubt that Duncan hates horses. He will stand at the gate and bark at the horses from a riding school that go up and down the lane outside. Cameron can tell the difference between petrol and diesel cars; he dislikes diesels. Nevertheless both are keen to get into the car for a ride. 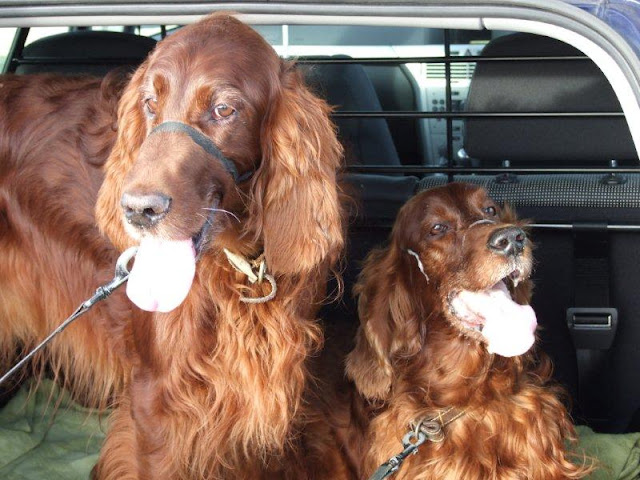 In the house both like you to make a fuss of them and look very comfortable resting on the settee (protected by a blanket – that’s the settee not the dogs.) The cats are the leaders of the pack; they tolerate one another with Cleo even curling up to rest on Cameron’s back. Duncan will not let her near him. 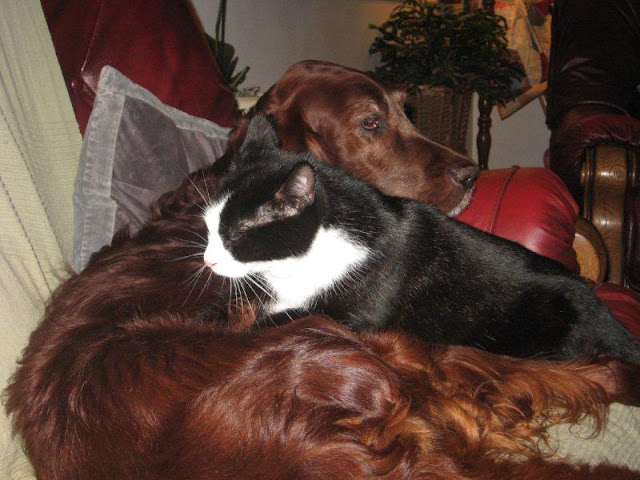 They have duvets and vet beds which they drag around in the utility area. Cameron still wears an Elizabethan collar at night, Both had lick granulomas when they first arrived after 6 months in the kennels. The granulomas took a long time to treat. Cameron’s bad patch on his hock required two operations. Although it has cleared up he would still lick the area at night without the collar.
One advantage of homing the dogs was that they didn’t need training when they arrived. However because of their age pet insurance was out of the question. Duncan’s joints are creaky and you can see that Cameron walks with one stiff leg, They are taken for walks in the village and in the local park; usually they are kept on the lead – Duncan has a tendency to wander off if not. It doesn’t seem that they had ever been used to long walks in the past.
Neither dog has been neutered so Duncan and Cameron retained other things than their names. Being left intact, names unchanged were two of the conditions of their re-homing. It is unusual condition of ‘ownership’ that the dogs are being fostered. If there is a problem they have to be returned to the Irish Setter Rescue Centre. That’s most unlikely; Duncan and Cameron have found their home and stride out with pride, their reds coats streaming out as they go. 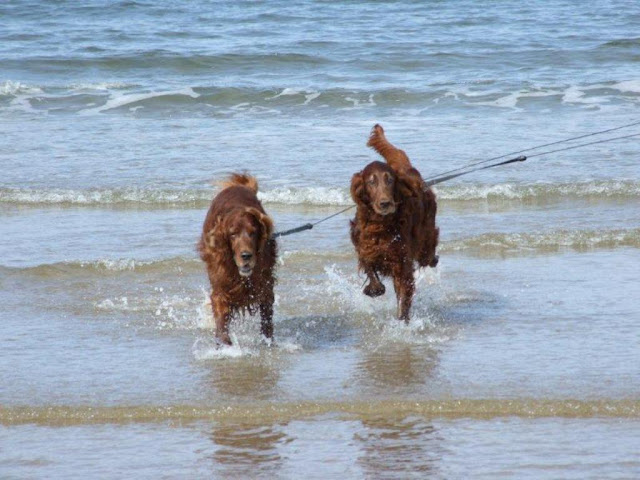 Those pictures bring a feeling of peace with them.

What beautiful dogs : I hope you get as much pleasure from sharing your life with them as they will undoubtedly get from living with you.

Alan, I have a series of posts on North Yorkshire Village dogs. As much as I would like some of them, these two as well, none of them are mine. I'm just pleased to see them all.

Happy Frog and I said...