Christmas and New Year’s Eve vie with Halloween for ghosts.
Local legend in Dorset concerns a phantom donkey standing on Newton Heath, near Studland. Its owner was robbed and killed while travelling across the heath; the donkey disappeared without trace. The animal returns each year on 22 December in the hope of finding its master.
Rochester Castle 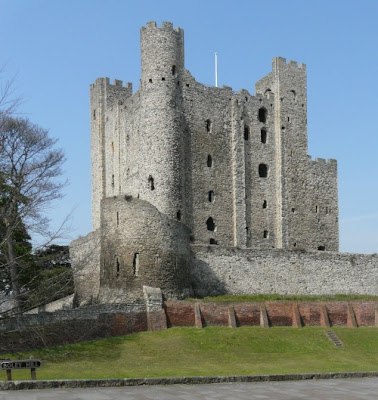 (photo by Stephen - www.picturesofengland.com)
Famous ghosts are those immortalised in Charles Dickens’ Christmas Carol. Dickens ghost walks through the gravestones in the graveyard at Rochester Castle on Christmas Eve. Dickens loved Rochester throughout his life and wanted to be buried there. In fact he lies in Westminster Abbey. His ghost is said to appear outside the Corn Exchange at midnight, winding the hands on his watch.
Hever Castle 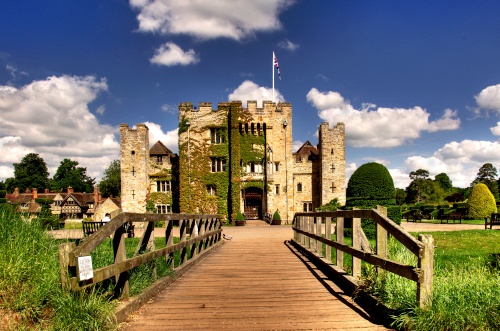 (photo by Sarah Dawson -  www.picturesofengland.com)
On Christmas Eve a ghostly female, thought to be Anne Boleyn, glides across the bridge over the River Eden in the grounds of Hever Castle in Kent. She is also seen under the great oak where Henry VIII courted her.
December 24th is the time at which a ghost of a monk is to be seen wandering through the ruins of the old Cistercian abbey at Strata Florida, Ceredigion in the north-east of Tregaron.
There is more than one version of why the ghostly ringing of a sunken bell may be heard at Bomere Pool, near Shrewsbury, Shropshire on Christmas Eve. A village once existed where the pool is today.
One farmer persisted in cutting his corn on a Sunday; the whole village was punished for this infringement of the 10th Commandment by being sunk beneath the waves.
An alternative story says the people gave themselves to godless and riotous living; one year they refused to go to church on Christmas Eve. As a consequence the waters rose and drowned the village and its inhabitants.
Some people claim to hear the voices and cries of children and the church bells still toll in the watery world of Bomere Pool.
More bells but this time from the depths of a lake in Cheshire. Monks removed the bells from Combermere Abbey, near Nantwich when the original abbey was dissolved. The bells fell off the boat in which they were being transported. Now on 24th December the bells are sometimes heard, often accompanied by sightings of a ghostly monk.
The Tudor mansion, Madingley Hall in Cambridgeshire was built by Sir John Hynde in 1543. The ghost of Lady Ursula, his wife forever walks the Hall wringing her hands in despair. Lady Ursula was distressed at her son’s destruction of the local church of St Ethelreada in Histon to obtain building materials for the Hall. Each Christmas Eve she walks between the Hall and the church.
It was Prince Albert who introduced the Christmas tree to England when he had one set up at Windsor Castle. Albert bought Sandringham House for Queen Victoria and it remains a royal residence today.
Sandringham is known for its Christmas poltergeist. Noisy activity is seen and heard in the servants’ quarters on Christmas Eve and around the Christmas period. Cards are strewn around; footsteps heard and unpleasant presence felt. Staff have felt uneasy to be alone in the footman’s corridor.
Festive Ghosts will be continued with that of Thomas à Becket and the ghosts of New Year’s Eve in a later  post.
Posted by Bob Scotney at 11:48

The customary top qwuality spooks, Bob. Great stuff. You should put these together in book fomr. I'll be your first customer.

This is good stuff to read. I like all the history that surrounds the story of each ghost. We have ghost chasers here in our state that camp out at night in abandon houses to check temperature change and other technical things, trying to locate a ghost.

Wonderful post! I love to imagine a phantom donkey on the heath.