Despite its name I lay no claim to Kent’s Scotney Castle. However it has an interesting past and a ghost which features in this, the next of my ‘ghostly’ blogs. A Jesuit priest, an outlawed smuggler, a faked death, a coffin full of stones, and a murdered tax man take their place in the history of the Castle as well as the ghost. 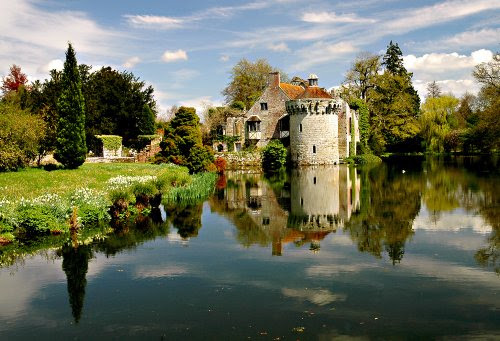 
Scotney Castle built in the 14th century by Roger Asburnham was really a fortified manor house designed to withstand attacks by the French on English towns in the south. The castle became the ancestral home of the Darrell family until it was bought by Edward Hussey in the18th century.

Catholicism was illegal in the 16th century. Thomas Darrel had added priest holes to the castle to be used for hiding priests fleeing from the state. Father Richard Blount, a Jesuit missionary worked from the castle from 1591 to 1598 and conducted secret services for Catholics in Kent and elsewhere.

At Christmas 1598 Blount’s presence was betrayed. Despite the authorities taking up residence in house and conducting rigorous searches Blount escaped capture. Thanks to a ruse by the servants and aided by bad weather Blount was able to let himself out of his hiding place and swim across the moat. He was never caught.

In the 18th century Arthur Darrell lived in the castle until outlawed for smuggling. Supposedly he died abroad; his body was returned for burial in 1720. At his funeral it is said that as the coffin was lowered into the grave a tall stranger in a black cloak said to a mourner, “That is me they think they are burying.” The stranger was not seen again.

Did the Darrel fake his own death so he could continue smuggling? In 1924 Arthur Darrel’s iron-studded coffin in the Scotney Chapel at Lamberhurst church was opened by the sexton. The coffin contained nothing but stones.

It’s said that Darrel murdered a Revenue Office who had discovered his secret and threw his body into the moat. The Scotney Castle ghost is described as dripping wet, emerging from the moat and staggering to hammer on the front door.

Is the phantom the spirit of the Revenue man? Or is it Father Blount’s?

Being an international traveling fanatic, I enjoy history, especially stories that are unusual and odd so I really enjoyed reading this. I'd bet that due to the stones being in the coffin, Darrel did fake his death but as to who the phantom spirit it? Hmmmm....probably the Revenue Officer who was murdered. Very interesting.

What a great story. I think maybe you should try to claim the castle just on the basis of your name ;)

Hi Bob .. what an excellent post on Scotney Castle - or your castle?! Completely different take to mine under the A - Z Challenge that I have just posted.

Fascinating tale of intrigue .. who knows what happened .. coffins full of stones always make me wonder.

Very interesting .. and thanks for directing us here .. Cheers Hilary

I just need to locate this castle having live in Kent for a large part of my life.