Feisty is probably the best word to describe Joe, the nine-year-old Airedale Terrier. He is sure that he’s in charge. A pedigree puppy from Lancaster, he has a different character than Theo, his predecessor. Like all Airedales Joe is happy to work with you but never lets you think he’s working for you. 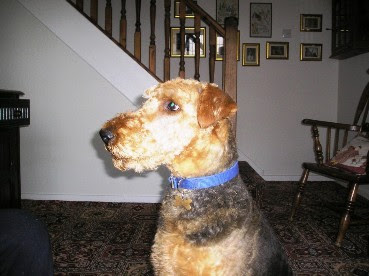 If you meet him on a walk you can see him assessing you as soon as you are in sight. He is not keen to be approached and will pull back from being stroked. He may even bark at you with that deep voice characteristic of his breed. He may even deign to take an offered treat – but it doesn’t always seem important enough for him to accept.

Joe has the run of the house and let’s anyone walking by, or visiting, know that this is his territory. There’s no chance of not hearing his deep-throated bark, once heard at close quarters you will always remember it. Make a sudden movement inside and off he goes again. Bonios will pacify him long enough until he has eaten them but if he doesn’t know you – well he starts again.

Joe has his own chair in the lounge in which to curl up and look around. He has a duvet for his bed but will also sleep on the landing. Joe is fond of food, especially scones, cushions, mints and Fishermans Friends; he even eats bees. In fact he will suck almost anything and transport all sorts of items out into the garden in the summer. 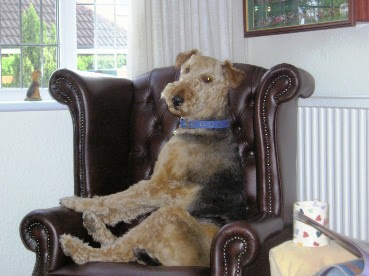 [This is not Joe’s chair]

Airedales don’t moult a lot but their coat needs regular attention. Joe is clipped every five weeks. A skin condition means the special Malaseb shampoo is used every four weeks for his bath. Joe also takes Metacam anti-inflammatory tablets for his lumbosacral disease, not that you can easily tell he has a problem.

Joe does not like being left alone for long; if he is he will cry and howl in protest. Surprisingly however he doesn’t like being cuddled unlike his predecessor.

On walks he is always kept on a lead. You get the impression that if he is let off then he would be away doing his own thing. Joe tolerates the other dogs he meets and gets along well with a Cocker Spaniel that occasionally comes to stay.

Although primarily a pet, his bark makes him the best burglar alarm of all. He guards the house so well that in the middle of the night he will bark to get you up - to dispose of any large spiders that appear. He will warn you of their presence, but job done it’s up to you to get rid of them.

If you didn’t know Joe that well you might think he is aggressive or bad tempered. However his bark is worse than his bite. Feisty may be the word for him. He is actually affectionate but on his own terms, and underneath all the feistiness he is a very sensitive soul.
Posted by Bob Scotney at 07:18

before I realsied that I was so much more a cat person in regards to care I always fancied an Airedale - they seemed to suggest that behind their very superior look they would suddenly amaze and amuse with a totally whacky character - do they?

The first dog I remember from when I was a young boy was an Airedale named Punch. He was very territorial and hated cats; so much so in fact that he killed the next door neighbour's when it invaded our front lawn. Other than Joe there is only one other in the village; he's territorial too but always friendly when he meets you. Whacky? I can't answer that.

We had a female airdale for 90% of her life and even put up her brothers and sister for most of a year once (now that was a zoo - 12 or 13 I think). She too was very territorial. I think it is the breed. However, she was very friendly with anyone who came by to visit, with the exception of one man - haha - the tax assessor - the one and only person she would have nothing to do with. She took her job of keeping our yard free of bears and moose, and making sure the chickens were behaving. I'm not sure what she was thinking about them but they were part of what she guarded in our yard. My cats too, though I think she would have much rather chased them than not, but they were family and so to be tolerated. Her favorite playmate was a raven that stopped by about every third day. They would chase back and forth across the yard until the raven got tired of the game, then he would move on to return in a few days. I would have another airdale in my home in a heartbeat.

We don't have to worry about bears and moose although there a few deer in the woods and fields bordering the village. These are not usually where the any dogs are taken.