As part of my degree course at St Andrews University in the 1950s I had to study Atomic Physics for a term. That's where I first heard of Niels Bohr's Atomic theory.

In 1813 Bohr had proposed a theory for the hydrogen atom based on quantum theory that energy is transferred only in well defined quantities. Electrons move round the nucleus in prescribed orbits and when they jump from one orbit to another with lower energy a light quantum is emitted. 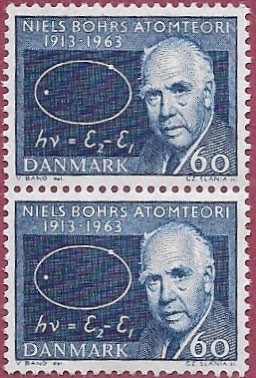 These stamps were issued to commemorate the 50th anniversary of his theory. His atomic model depicts a positive charged nucleus surrounded by electrons travelling in circular orbits defined by their energy level.

By the time of this anniversary we had seen the first Russian space flight (1961). Equipment used to track this event had included radio  telescopes.

This one appeared on a German stamp.

A great personal connection to the Danish stamps. I remember learning about electron orbits many years ago in high school.

I hadn't heard of Niels Bohr, so thank you for the introduction.