Stand By Your Beds

I cannot claim to have had much experience of dormitories and even less of ones occupied by the female sex. 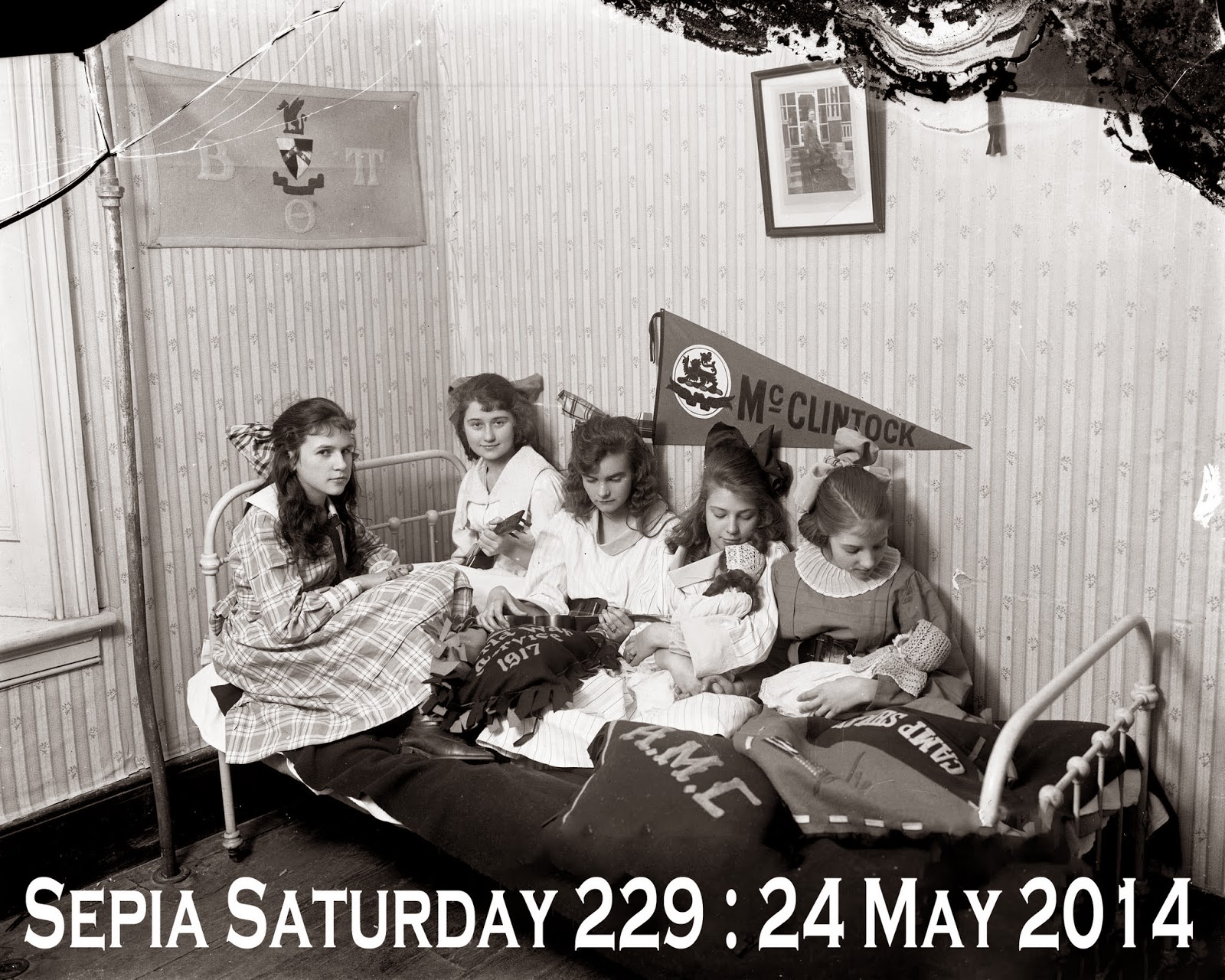 Our prompt this week shows a dorm room at a typical North American College in 1917.

I went to Stamford School in Lincolnshire as a day boy in 1948. I don't remember ever visiting the boarders' dormitories. However later some friends of mine were disciplined for 'raiding' the local girls school.

At St Andrews University I stayed in St Salvator's Hall, then a exclusively male hall of residence. Female visitors were only allowed in on a Sunday afternoon in those days. Now of course both male and female students live in 'Sallies'.

I have managed to find some dormitory pictures from earlier times, none as luxurious as Sallies spartan rooms.

You can only guess at what conditions were like at Ipswich School.

This pen and ink and water colour drawing is of the interior at the end of the period of occupation by Ipswich School.

As part of the civilian evacuation scheme in Britain  during WWII Malvern College was evacuated to Blenheim Palace. The State rooms were converted into dormitories and also used as classrooms.

The tapestry depicts a famous Malbarian battle scene (The Battle of Blenheim 1704). Because of the value of the works of art and antiques in the rooms ink was not used in school classes - all work was done in pencil. (Photo from Collections of the Imperial War Museum - IWM Non-Commercial Licence)

However refugees in Britain were not in such luxurious surroundings.

This photo is also from the collections of the Imperial War Museum (IWM Non-Commercial Licence).

The blurb with the photo says, "Boys settle down in their bunks in one of the dormitories at Pauntley Court, the beams in this attic bedroom reminding them of the history of the building and the tradition that says it once belonged to Dick Whittington."

Somehow I doubt that was on their minds at all.

To show I'm even handed I looked for sleeping quarters containing girls and came up with these.

And from my daughter's stay in Germany for a term, before she became one of the first six girls at Yarm School.

The only dormitories I have shared were call barrack rooms. Often there you were rudely interrupted by a Sergeant Major or a junior NCO bawling "Stand by your beds!" - rather like these fellows.

In basic training though, the order might have been, "Stand by your beds with your boots in your hand!"

Or as one newly appointed Corporal shouted, "Stand by your boots with your bed in your hand!"

Now it's a case of "Right turn and march over to other dorms at Sepia-Saturday-229.

That last command made me laugh!

I liked the various photos of art...and the stories to accompany each one...especially the forbidden ink around works of art!

You certainly have a good share of beds and dormitories.

Well you certainly aced this. I feel like I've experienced college life from so many directions! Very interesting and fun photos. I really like your sleeping daughter, quite priceless!

Oh, I forgot to mention in my first comment, the male students hanging out of the windows is really a fun capture. What a moment frozen in time.

As an 8 yr old I was sent to Riddlesworth Hall in Diss, Norfolk where we slept in dormitories. 20 years later Princess Di went to the same school and had the same head mistress. I also boarded at a school in Herne Bay, Kent called Girdler's Collegiate. I know all about dorms. No pix of dorms though.

A nice collection! And like Karen, I thought the photo of all the guys hanging out the windows was a neat shot. But it was the one of your daughter sleeping in the bunk on a ski trip that caught my attention because of the curtain. We have (or had, anyway) one exactly like it! It used to be a bedspread but eventually became a curtain to pull across a tent doorway when one only wanted to change clothes in there & didn't want to have to pull the full canvas door shut in order to do it & roast alive inside a hot tent. Mom sewed tabs inside the tent on either side & above the door which held a small curtain rod in place & the former bedspread-curtain slid back & forth on shower curtain rings. Worked great!

You got this theme well covered, Bob. I suppose that during the war many schools across Europe were forced to find new locations for students that made for a different kind of foreign exchange.

A fun collection.
Was anyone cheeky enough to actually pick up their bed?

We chuckled over the ban on ink when we visited Blenheim Palace last year. These stately homes have often been called on to serve other purposes and this year they have recreated the scene showing the use of the Long Library when part of a convalescent hospital during World War I.
Only ever encountered a dormitory environment on geography field trips, on one of which the beds resembled V-shaped valleys!

The closest I came to staying in a dorm was at summer camp when six of us shared a cabin.
Love the pic of those hanging out out the windows.

I enjoyed reading this, Bob. A fun take on the theme.

That's a good photographic study of you, lurking up there on the balcony railings.

I like the sway you leapt from girls and dolls to a male perspective on beds and dorms!

My college was all female until the year before I joined, so you can imagine that the few male students were very popular!

I went to college in the days of separate dorms for men and women. Now I believe all dorms are mixed. It actually is economically more practical, I'm sure.