The 25th June this year is the 300th anniversary of the birth of Thomas Brown, Yarm's valiant dragoon,


Elements of mystery surround his life and death. The exact location of his grave is still unknown. In 1968 the Queen’s Own Hussars presented a memorial headstone which stands in the Yarm graveyard of St Mary Magdalene’s Church. The inscription on the headstone, erected in 1969, reads: 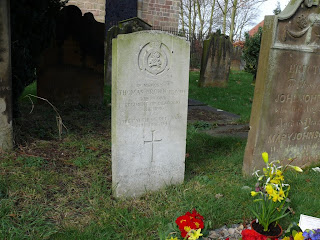 “He distinguished himself in a most extraordinary manner at the of Dettingen.

He had two horses killed under him, two fingers of his bridle hand chopped off and, after retaking the standard from a gentleman at arms, whom he killed, he placed it between his legs and the saddle and made his way 80 yards through a lane of the enemy, exposed to fire and sword, in the execution of which he received eight cuts in his face, hands and neck, 2 balls lodged in his back, 3 went through his hat, and in this hacked condition he rejoined his regiment, who gave him three huzzas on his arrival.”

At Dettingen King George II became the last English monarch to lead his army into battle. The heroic Tom Brown, a private in the 3rd Hussars, commanded by Brigadier Bland, became the last man to be knighted on the battlefield.

Tom was born at Kirkleatham but accounts of his life give different dates for his birth. However researchers at the Teesside Archives have found a baptism record for Thomas Brown on June 25, 1710. Brown’s father had a cottage in Kirkleatham close to Sir William Turner’s Hospital which had been founded in 1676.

Two years after Dettingen the people of Kirkleatham planted an elm tree outside the hospital gate with a plaque commemorating Tom’s exploits. When this tree died an oak was planted in its place and the plaque disappeared. The plaque has since been replaced, thanks to a vicar in the 1940s.

Despite many references to Brown being knighted doubt remains about this honour. The caption on a 1746 engraving by Louis Boitard refers to him as Mr Brown. The oldest regimental records of the Hussars do not refer to the knighthood either. Twentieth century books on the history of the 3rd Hussars do not mention it. Even the can find no record in the grants of Arms or in the standard printed work, “Knights of England.” However there is a written account of Brown’s knighthood in “Battle Honours of the British Army,” published in 1911.

An oil painting by James Princep Beadle shows Brown kneeling in front of King George after the battle hangs in the Queen’s Royal Hussars Officers’ Mess. Beadle specialised in military paintings; he produced the Brown work in 1904 but his source for the knighting of Brown has not been established. A copy of this painting, presented by the 3rd Hussars in 1993, on the two-hundred and fiftieth anniversary of the battle is in .

Tom Brown’s story appears in a typewritten poem entitled ‘The Song of the Silver Nose’ in the archives – possibly a modern transcription of the 18th century original.

In old Kirkleatham stands a tree

They planted to the memory

Who helped to beat the Frenchies down.

Refrain (to be repeated after each verse)

And this is the song of the silver nose

Of our hero, Tommy Brown.

The French were holding German Lands

When George of England made his plans.

To help his friends he crossed the sea

With Tom Brown in his company.

In June of seventeen forty three

He led his men across the

But the Frenchies drove him back again.

King George, he’d lost near half his men

When he made his stand at Dettingen.

But when they tore his flag away

He feared he’d lost the day.

But bold Tom Brown, he seized his chance

And galloped through those men from .

He fought and swore and cut and tore

Till he’d won the English flag once more.

He place that flag between his thighs

And thundered back through the battle cries,

The Frenchies tried to cut him down

But they couldn’t stop our Tommy Brown.

They lodged two bullets in his back.

In fighting off King George’s foes

But when Tom raised the flag again

And proved themselves true Englishmen

By winning the battle of Dettingen.

He gave him a pension of thirty crown,

A walking stick with a golden head

And a silver nose to wear instead

In a High Street inn of old

As landlord Tommy settled down

With his silver nose and walking stick

Till they buried him in forty-six.

It was too dangerous to remove the bullets from Tom’s back and this may have been the reason he left the Hussars.

The house in which Tom lived out the last few years of his life still stands on the north side of Yarm High Street; it had been an inn, bearing his name, from at least his time until it lost its licence in 1908. One of his contemporaries asserted that he “did kill himself by drinking.” 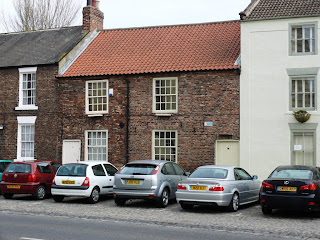 Today the inn is two separate homes one of which boasts a blue tourist plaque to identifying him as the hero of the Battle of Dettingen. A small brass plate on the door identifies it as Tom Brown’s House.

The original wooden sign which was attached to the house has disappeared. After a period on show at Preston Hall museum a new sign remains in ; so far attempts of the Yarm Civic Society to have the sign returned to the front of Tom’s house have not succeeded. 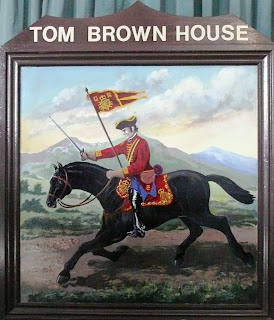 The valiant dragoon was interred in Yarm churchyard in 1746. Of that there is no doubt. The church register simply states, “Buried – Thomas Brown Dragoon.”

Another fascinating snippet of your local history, Bob. Well researched and well written as usual.

No Jack. This was one where I really got miffed with editors who did/would not recognise the anniversary date. Even the local magazine said they had done Thomas Brown before!