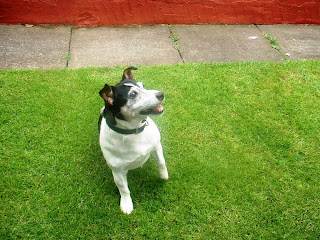 Born on a moor land farm it seems right that the second in the series on dogs in a North Yorkshire village should have the name of Bracken.

Bracken is a thirteen years old, black and white Jack Russell with touches of tan in his ears and round his posterior, the patch of tan on the top of his nose so light that it looks like pink skin. Obtained as a puppy for a donation to the Yellow Brick Road charity Bracken has lived with his owners ever since.

Following the advice of another dog owner in the village, Bracken has been trained by his owners to walk off his lead on the roadside paths; he will sit on the command of ‘Car, Bracken!' and knows which side to sit when he is told ‘Left' or ‘Right'.

His figure is best described as slightly rotund and this is due to the course of steroids prescribed for him by the vet to alleviate a recurring itchy skin which cannot be completely cured. The steroids have proved expensive over a period of time and Bracken is not covered by pet insurance.

Bracken is a good house dog and will make the presence of visitors known, especially if they are strangers. He is not aggressive like many Jack Russells seem to be, although he can look more ferocious than he really is. At thirteen he will still howl for the lady dog next dog when she is on heat.

Bracken is ball mad and has ways of making you play. When his owners clean their car on the drive at the front of the house, the ball is put down at their feet. Bracken knows that it will roll down the slope and across the road. He also knows that if he waits it will be fetched back and thrown for him, so that one of them at least can finish cleaning the car. Gardening at the front receives the same treatment.

Bracken sleeps on a small duvet in a basket inside the house, usually in the conservatory. However he does not like it there when rain beats down upon the roof; the conservatory is also too hot for him when the weather is warm. He then retreats further into the house.

Apart from one West Highland terrier, Bracken does not like other dogs and there are a number which cause him to be put back on his lead. He is friendly with children and always pleased to see people he knows. Bracken dislikes baths, standing rigidly and looking to his front - it seems an effrontery to him to be subjected to such indignity.

Fed a handful of biscuits in the morning, Bracken has one main meal in the evening usually of biscuits for adult dogs, although recently he has acquired a liking for Pedigree Pouches. Bones are limited since they tend to cause diarrhoea, a condition not recommended for ‘poop-scooping' times.

Each evening Bracken drags the duvet from his basket to sit at his owners' feet to watch TV. At ten o'clock Bracken will stare at his mistress until her husband opens door to let him out for his nightly ablutions. Guess who's in charge.